Photo: The Riverside Studio, also known as Tulsa Spotlight Club or Spotlight Theatre, was built in 1928 at 1381 Riverside Drive. It was designed by architect Bruce Goff in the International Style. It was built as a house with a studio wing for a music teacher named Patti Adams Shriner. It was listed on the U.S. National Register of Historic Places in 2001. Photographed by user:W. R. Oswald, 2012, (own work) [cc-by-3.0 (creativecommons.org/licenses/by/3.0)], via Wikimedia Commons, accessed April, 2013. 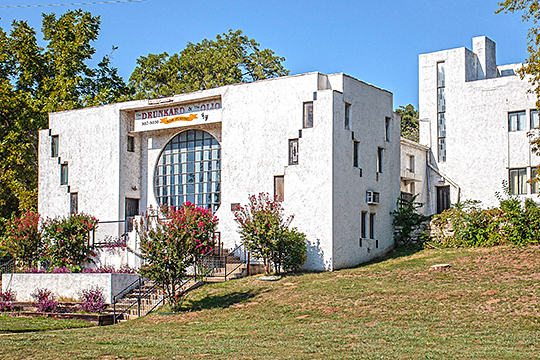 The town of Tulsa existed as early 1879 when a post office was established on the Perryman Ranch in the Creek Nation. The town, first called "Tulsey Town," grew slowly. During the early 1880s, the town was a haven for gamblers and "bad men" due to its isolation. At the time of the first government townsite survey in Indian Territory in 1900, Tulsa's population stood at merely 1,390. [1]

Shortly after this survey, a momentous event occurred near Tulsa, Indian Territory. This event not only had a major impact on Tulsa but the entire future state of Oklahoma. In 1901, the state's first important commercial oil well blew in. Located in Red Fork, this landmark well was across the Arkansas River from Tulsa. Two years later, the Secretary of the Interior allowed the leasing of restricted Indian Territory lands under Department of the Interior supervision. The oil rush was on as oil men from Pennsylvania and other states flocked to Indian Territory. In 1904, three men built a toll bridge over the Arkansas River connecting Red Fork and Tulsa. In addition to allowing Tulsa to benefit from the Red Fork strike, the toll bridge also enabled the town to profit from the fabulous Glenn Pool strike which blew in 1905. Within months of the discovery, the Glenn Pool field was "famous throughout the industry as the richest small field in the world." [2]

At the time of Oklahoma's statehood in 1907, Tulsa's population had jumped to 7,298, an increase of nearly six thousand in just seven years. In just three years, Tulsa's population more than doubled to reach 18,182 in 1910. As to be expected, a major commercial and residential building boom accompanied this tremendous population boom with brick plants working at capacity. Hotels, office buildings and fine residences were under construction as the streets were paved. By late August 1910, construction activity underway in Tulsa was valued at over one million dollars. Pipelines to the Gulf of Mexico opened as oil prices climbed. In 1912, a third major oil pool, the Cushing field, blew in. Although the incredible production from the Cushing field temporarily resulted in a drop in crude oil price by 1916, the United States' entrance into World War I rallied the market. Additionally, it was during this time that the first oil refining plant opened in Tulsa. By 1920, Tulsa's population had grown to 72,075, a tremendous increase of almost fifty-four thousand persons in merely ten years. Nearly doubling in the ensuing decade, Tulsa's population by 1930 was 141,258 and the city was the second largest in the state. Although oil drilling activity occurred allover eastern Oklahoma, the oil companies' headquarters were generally located at Tulsa and that is where the oil men in charge made their homes. As such, Tulsa became known as the "Oil Capital of the World." [3]

Like the rest of the nation, the oil business and Tulsa did not escape unscathed by the Great Depression of the 1930s. Further worsening the status of the oil industry in Oklahoma was the October 1930 discovery of oil in the East Texas field. Forty-five miles long and five to ten miles wide, the East Texas field quickly yielded a sufficient amount of oil by itself to satisfy national demand. The worsening economic conditions combined to such an extent that by 1933 the price of oil had reached bottom of the barrel prices and a good portion of Tulsa's residents were jobless. Although oil prices stabilized between 1934 and 1940, the decade of the 1930s proved to be difficult for Tulsans, as all Americans. In 1941, the city's population stood at only 142,157. This represented a growth of only 899 citizens since 1930.[4]

America's involvement in World War II proved to be a major redeeming event for Tulsa, as well as the nation as a whole. Although Tulsa and Oklahoma did not benefit from the increased military spending of early 1940, it quickly became apparent Tulsa enjoyed certain important characteristics that made it ideal for subsequent military spending. These features included its central, secure location in the middle of the country; ready sources of cheap fuel; a good network of roads and highways; and, a large pool of trained and unemployed workers. According to one source, the only drawback Tulsa had was the lack of available workers housing for the thousands of laborers necessary to make Tulsa" ... a center of war production." Nonetheless, in early 1941, the War Department named Tulsa as a potential site for the new $15 million Douglas Aircraft Company plant. On 2 May 1941, a ceremonial ground breaking heralded the start of construction on the mile long building which by the summer of 1942 occupied one-and-one-half square feet of floor space. By the fall of 1942, the Douglas plant was in need of expansion and the plant payroll included nearly fifteen thousand workers earning an average of just over $185 a month. [5]

The Douglas Aircraft plant was not the only wartime plant impacting Tulsa in the early 1940s. Although the aircraft industry expended more than twenty million dollars during the period to expand their facilities in Tulsa, other factories in Tulsa spent more than seven million dollars in expanding their industrial plants during the war. In 1939, Tulsa manufacturers employed eleven thousand Tulsans in primarily oil-related manufacturing jobs. By 1945 forty-two thousand residents worked in local manufacturing plants. The majority of these in non-oil related capacities. In 1945, the United States Department of Labor determined that Tulsa was among the top three cities impacted by the wartime industrial expansion. In terms of the number of residents, between 1940 and 1945, Tulsa's population expanded by nearly a third to reach 185,000. [6]

Following the end of World War II, Tulsa continued to enjoy a prosperity unthought of in the 1930s. Responding to consumer demands for goods of all types, Tulsa continued to expand its industrial base. Further boosting the city's economy was the continued spending by the Federal government on military-related industries during the Cold War of the late 1940s through the early 1990s. This remarkable varied industrial development spurred Tulsa's growth through the 1950s and 1960s. By the early 1970s, Tulsa led the state in manufacturing. [7]