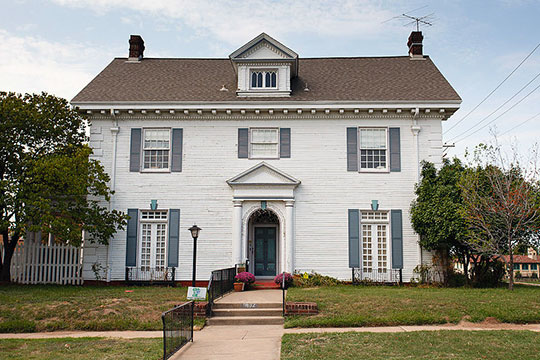 The James Alexander Veasey House (also known as the Veasey-Leach House) was listed on the National Register of Historic Places in 1989. Portions of the content of this web page were adapted from a copy of the original nomination document. [‡]

The James Alexander Veasey House (1802 South Cheyenne Avenue) is architecturally significant because it is the best remaining example of a Colonial Revival style residence in Tulsa and the only one executed in all wood construction. The house was built in 1913, approximately the mid-point of the Colonial Revival style's popularity in the United States. The blueprints for the house clearly indicate the architect's intended masonry construction, but wood was substituted to meet Veasey's wishes.

John T. Blair, architect, designed the Veasey House. He was well known in the Tulsa area and held the fourth license issued in the State of Oklahoma for the practice of architecture. While it cannot be absolutely documented, Blair Brothers Construction Company is believed to have constructed the house. John T. Blair and his brother owned a construction company that was often responsible for carrying out designs of the former.

The house is constructed in a "T" shape plan with end gables, flanked on one end by a masonry chimney and on the other by a one-story decorative porte cochere. The porte cochere features Tuscan full and engaged columns with square bases and capitols and undecorated cornice, topped with a metal railing.

Veasey had the property designed and constructed for his family. Today [1988] the property is owned by his daughter, Mary Veasey Leech.

The Veasey House represents an interesting reversion to the early period of the style's prominence when wood was often used. Clearly the Veasey House was built of wood in a manner to emulate the appearance of brick and stone. This is evident in the siding, which is narrow as well as flat in application, giving the appearance of coursed brick. Also, the quoins, keystones, pediment and columns all present the look of masonry decorative features but are all of wood.