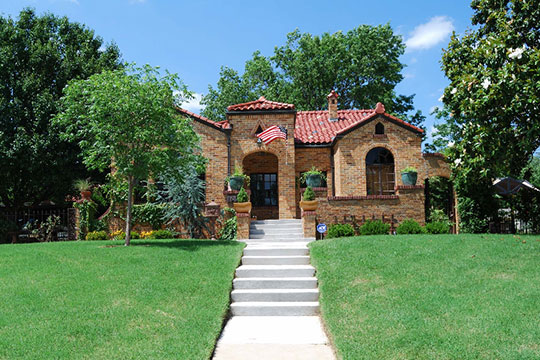 When Ardmore was founded it was named by an official of the railroad in honor of the Philadelphia suburb he had known, though the young settlement had little of the beauty of its namesake. [Ardmore is a place name and zip code (19003) and residential neighborhood (see Ardmore Neighborhood, in Lower Merion Township, Montgomery County, PA.]

The town was established in 1887 as a railroad station when the tracks were laid for the Santa Fe Railway, which was the first railroad through the central part of the Indian Territory, connecting Texas with Kansas. [Ardmore was incorporated in 1899.] The railroad replaced the cattle trails and wagon roads with faster, more efficient transportation for the cattle and cotton going to eastern markets. Prior to statehood in 1907, Ardmore became the largest inland cotton center in the United States, shipping an average of 25,000 bales of cotton annually by rail, helping insure the commercial viability of the town. In 1890, the importance of Ardmore expanded further when the first federal district court inside Indian Territory was established in Ardmore. After statehood, the town's role as a governmental center continued when it became the county seat of Carter County. The discovery of the Healdton Oil Field nearby in 1911 led to an economic boom for the town as a railhead for much of oil and gas from the field.