Photo: Building in the Berkshire Village Historic District, Berkshire, NY. The Historic District was listed on the National Register of Historic Places in 1984. Photographed by User:Delphinium1 (own work), 2017, [cc-by-4.0 (creativecommons.org/licenses/by-sa/4.0/deed.en)], via Wikimedia Commons, accessed June, 2018. 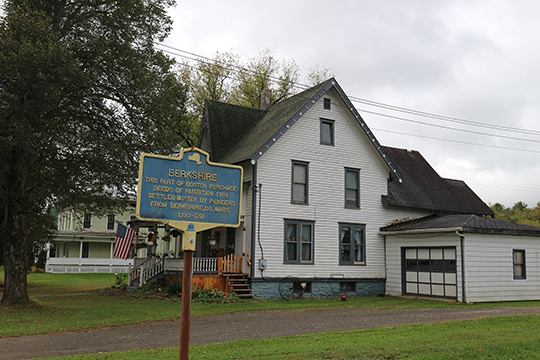 The Berkshire Village Historic District was listed on the National Register of Historic Places in 1984. Portions of the content on this web page were adapted from a copy of the original nomination documentation. [1]

The Berkshire Village Historic District consists of seventeen properties located south and west of the intersection of Main Street and Leonard Avenue in the hamlet of Berkshire. This intersection represents the principal crossroads of the hamlet, which itself is located near the geographic center of the township.

A total of twenty-five contributing buildings occur within the Berkshire Village Historic District including thirteen historic residences, one historic church building, one community hall and ten contributing outbuildings associated with these elements. There are also two non-contributing modern structures including the fire station and a house trailer. The Berkshire Village Historic District includes a mix of building types and architectural styles which partially reflects the historical composition of the hamlet. The buildings date from c.1820 to 1932 and individually represent vernacular interpretations of Federal, Greek Revival, Italianate, Victorian Gothic and Queen Anne architectural styles. They form a cohesive group due to a uniformity of scale, orientation, and the predominant use of frame clapboard construction. Although some of the buildings have been modified with the addition or deletion of minor details or materials, most of the buildings retain their essential architectural integrity. Likewise, the Berkshire Village Historic District retains its spatial integrity and historical character. It is still the focus of community activity for the township as it has always been and includes the public library, located in an historic house, the community hall and the fire station.

The Berkshire Village Historic District is a significant and cohesive concentration of buildings which reflect the historic settlement patterns, the architectural taste of the community, and the economic development of the hamlet and the surrounding township between 1820 and 1932. It is located at the principal crossroads of the hamlet and includes distinctive vernacular examples of domestic Federal, Greek Revival, Italianate and Victorian Gothic architecture, as well as an important Queen Anne style church designed by Elmira architects Pierce and Dockstader and completed in 1889.

The hamlet of Berkshire developed as a regional center of commerce, transportation, and industry as early as 1800. Development focused on the East Branch of the Owego Creek and the trail that ran beside it, now Route 38, or, in the hamlet, Main Street. The lands occupied by the hamlet formed part of lots 344, 345 and 347, parcels owned by Asa Leonard, David Williams, and Stephen Ball, who were active in establishing the town's first industries. There was a tannery in the hamlet in 1800 and by 1820 there was a sawmill, gristmill, carding mill, distillery, blacksmith, and harness shop. A frame schoolhouse was erected in 1807, and the first frame church was built on Main Street in 1827. It is probable that by this time the hamlet had taken shape roughly as it is today: a linear strip with a dual focus, the intersection of Glen Road and Main Street to the south, and the Leonard Avenue/E. Berkshire Road and Main Street crossroads to the north. At this northern intersection there was a corner store, and nearby stood several other shops, the first church, the gristmill and sawmill. The layout of the village, then as now, was unplanned detached residences randomly interspersed with commercial and institutional buildings, giving way to farmsteads on the side streets and edges of the hamlet.

As the town's farms prospered in the mid-nineteenth century, the hamlet began to play an increasingly important role, not only as a center for educational, religious and community affairs, but as an important commercial and market center, where raw materials and agricultural products were processed for transport to regional market centers. As farmsteads moved away from the complete self-sufficiency of the early years, the hamlet became increasingly important as a supply center for foodstuffs, clothing, hardware and agricultural implements. By 1860, the hamlet included three churches and thirty-four dwellings. Village residents included pastors, a doctor, teachers and numerous merchants and tradesmen. Residential buildings in the village ranged from modest one and one-half story Federal period cottages to stylish examples of Greek Revival and Italianate architecture.

The coming of the Southern Central Railroad in 1869 reinforced the importance of the hamlet by broadening agricultural markets and encouraging industrial expansion. A new neighborhood of industries and modest residences grew up near the railroad tracks. The town became increasingly less isolated during the late nineteenth century and more aware of current architectural trends and tastes. Thus, several houses in the hamlet were updated with large porches and stylish ornament and new houses were built in a restrained reflection of the Victorian Gothic mode. But it was in public architecture that the community best expressed its growing sophistication: The 1888 Berkshire School, an excellent example of Stick style design, and the Methodist Church and Congregational Church, designed in the Queen Anne style by prominent Elmira architects, exemplified the pride and prosperity of the period.

The twentieth century has brought economic decline to Berkshire as to other areas of rural New York State. Buildings from the 1930's, for example, the 1932 Harper's Playhouse, reflect a return to the modesty and simplicity of the earlier vernacular traditions, while post-World War II construction displays a total break from traditions in the ocean of mass-produced design and materials. Automobile travel now carries shoppers, workers and even school children away from the community but has also made it possible for Berkshire to exist as a bedroom community for workers in neighboring small cities. Most of the town's commerce and industry has been lost, and the town is increasingly residential. The 1888 school is gone, a modern firehouse taking its place, but the churches and library continue to occupy historic buildings and to hold a firm place in the life of the community.

The historic buildings which make up the Berkshire Village Historic District form the only extant grouping to reflect the prosperity of the community at the peak of its development. Always an important crossroads, it has gained added significance as the only portion of the historic hamlet to retain the integrity of feeling and association reflective of its nineteenth-century origins.