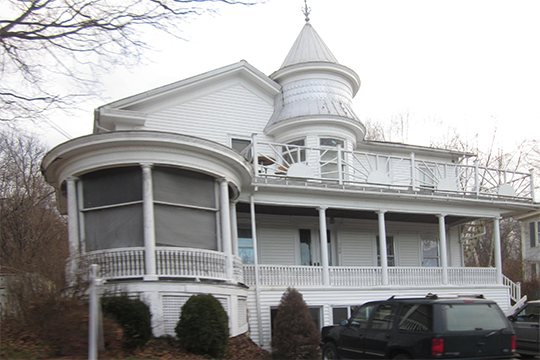 The Schodack Landing Historic District [‡] was listed on the National Register of Historic Places in 1977.

The topography along the river bank in this general area consists of a steep slope broken by many streams and gullies. A narrow, relatively flat strip along the river's edge contains the New York Central railroad tracks, Route 9J and the buildings of the hamlet. A very few homes are perched on the hillside. Most of the buildings are widely spaced and there are many trees. The hamlet is bisected by County Route 2 which leads eastward to the hamlet of Muitzes Kill. Because of the successive waves of development which occurred here, Schodack Landing's buildings were constructed during every historical period from the late eighteenth century onward.

Of the approximately 86 buildings in the Schodack Landing Historic District, 16 are thought to date from before 1790, 9 from between 1790 and 1830, 31 from between 1830 and 1880 and 18 from between 1880 and 1915. Ten buildings have been built since 1915 and there are 2 barns which have been converted to residences. In addition, the sites of several now demolished very early residences are known. Almost all the extant buildings are residences but there is also a post office, two churches, a nursing home, a tavern and a store.

The special character of Schodack Landing derives partly from the absence of modern intrusions, partly from its intimate relationship to the river and partly from the large number of early structures which retain their original simplicity despite the addition of modern sidings. The typical home from the earliest period of settlement is one and a half stories high with a plain gable roof and end chimneys. There are also two early gambrel roofed homes. Houses from around the middle of the nineteenth century are wood sheathed with the gable end facing the street and verandas with decorative brackets. There are a few more elaborate homes with mansard roofs or Italianate features. The modern dwellings are both modest and undistinguished and the new post office, which occupies the site of a now demolished Greek Revival period academy, is likewise nondescript.

In 1707, leases for land on the mainland beside Schodack Island were granted to four related "tenants in common" — one of them Jacob Schermerhorn — by Kiliaen Van Rensselaer. These Schodack Landing area farms and two others leased separately at about the same time seem to have been occupied between 1707 and the 1720's by five families, all closely interrelated as siblings or by marriage. The names are those familiar on maps of later years — Schermerhorn, Van Valkenburgh, Barheyt, Van Alstyne, and Jansen. In 1734, part of the Barheyt land was sold to another related family from Papskanee, the Van Burens.

That the families remained and increased is evident in Albany and Kinderhook church records of marriages and baptisms. Some baptisms also were made by the Kinderhook minister "at Schodack" in the 1740's. By the mid-1750's, enough of a congregation existed so that a mission of the Reformed Dutch Church was established at Schodack Landing and a minister was shared with Kinderhook. Even though Rensselaerwyck had been an English colony for nearly one hundred years, the church was still under control of authorities in Holland and the first records were kept in Dutch.

By the 1760's, Schodack Landing seems to have been firmly established in its village form, and its occupants, still Schermerhorns, Barheyts, Van Valkenburghs, and Van Burens, were making their living not by farming alone, but by trading, as merchants, or in occupations such as shoemaking and tanning. Boards were an important commodity.

After Crown Point was taken by the English in 1759, a new fort was built there, and, according to The Village of Nassau, (1969), by Paul Huey, "As this huge symbol of colonial security to the north initiated a new period of development in the Hudson Valley, the result was almost immediate in the valley of the Valatie Kill as well as in other more remote areas of Rensselaerwyck."

Schodack Landing's tradesmen and merchant families began to participate in this development with the establishment of inland mills, and by supplying inland taverns and stores with wares from the river trade. The community continued in this role for about twenty years, until Nassau, East Nassau, the Chathams, and other inland store locations developed into independent communities. Men of this community held influential memberships on committees functioning during the Revolution and during the setting up of the new Federal and State governments. Some, members of wealthy Albany families, were important merchants and bankers. Others held judgeships in Albany and Rensselaer Counties, or held elective office.

After the period of intense inland development to which the merchants and enterprises of Schodack Landing were so necessary, the village became an important export center for farm products. Long lines of farm wagons choked the roads to the dock and, later, to the railroad station. About mid-century, the effect of changed transportation patterns brought about by the railroads, and the development of mass production, as well as other cultural and economic factors, relegated Schodack Landing to the role of a quiet local freight depot.

In 1880, Sylvester's History of Rensselaer County characterizes the village in this way:

"Schodack Landing is a pleasant post-village in the southwest part of the town. It is situated on the Hudson River...directly opposite Schodack Island, and is a station on the Hudson River Railroad. It contains a Reformed Protestant Dutch church, two hotels, a number of stores, and about 400 inhabitants. In times past a large freighting business has been carried on from this point, and it is still an important shipping station."

A new burst of prosperity occurred in the late 1800's when the sale of river ice to the crowded cities, particularly New York City, became important along the reaches of the Hudson River below Troy and Albany. Large ice houses were built at Rensselaer, Staats Island, Castleton and Schodack Landing, as well as farther south. When need for ice dwindled, Schodack Landing became primarily residential. Practically no new building occurred during the twentieth century.

Among Schodack Landing's buildings are a number of architecturally and historically important eighteenth century Dutch brick houses. On other old houses, while siding has in some cases been covered, an occasional fanlight, classic window entablature, or simple Federal exterior gives architectural interest to the village. Particularly appealing, from the years of the mid-1800's and later, are porches trimmed with scrolls, brackets and cut-outs. A few representative imposing Victorian homes remain from the fleeting years of late prosperity. Lattice work, turrets, and gracefully turned railings extended the Victorian feeling into the 1900's.