Photo: Wyant-Talbot House, ca. 1870, 42 Clark Avenue, Cornwall-on-Hudson, NY. The house was built on property owned by L. N. Wyant, a local merchant about who little is known. By 1891, Mr. Talbot is shown as owning most of Clark Avenue. Talbot was also a local merchant, owning a store in the village. Listed on the National Register of Historic Places in 1996. Photographed by User:Daniel Case (own work), 2007, [cc-by-3.0 (creativecommons.org/licenses/by/3.0)], via Wikimedia Commons, accessed November, 2012. 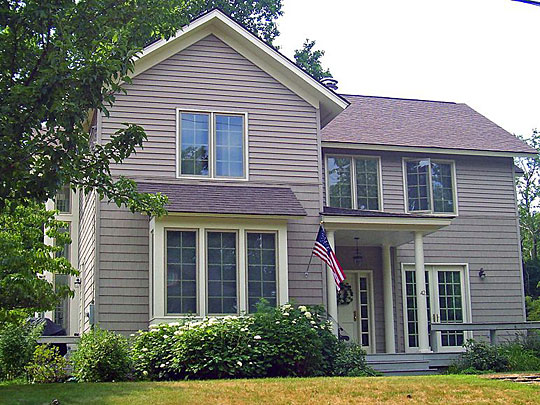 First-time passengers aboard the steamship Mary Powell in the early summer of 1899 surveyed the west bank of the Hudson River, where they would soon land, and were amazed to see spread out before them one of the busiest river ports in the lower Hudson Valley. Seymour Darling, a deck hand aboard the vessel called out, "Cornwall Landing!" Pilot Guernsey Betts smoothly brought the 300-foot long boat in toward the dock as Captain E. A. Anderson looked out at this scene he knew so well.

On the shore, a cluster of locals came to greet the arrival of this splendid craft. As one observer commented, 'She walks the water like a thing of life.'

Large brick buildings lined the shore and, further to the west, a giant jetty designed as a railroad-loading platform arrowed some 800 feet out into the river. Counting the mainline and its spurs, which led onto this trestle, there were 27 different tracks, perhaps not so surprising, since Cornwall was the major transfer point for coal that was destined to be delivered to communities all over the northeast.

Above this bustling industrial setting loomed Storm King Mountain, with its hotels and large boarding houses, the destination for many of the passengers who journeyed up from the city seeking cool breezes and clean air. Cornwall was a "safe harbor" in every sense far north of the tuberculosis and other diseases that were a constant threat to urban residents in the late 19th century.

Who Built This Home of Ours?

Isaac Tobias did. And Susanna Bartlett. And Michael Sayler. And Catherine Bogert. In 1788, New Cornwall Town was born, and these hardy settlers above, along with some 600 others, were here to be counted in the first official Census of 1790. This small enclave of New Cornwall Town changed little in the years to come. But when the Town grew commercially, people followed, and by 1840 Cornwall was stable and secure. In that year, Daniel Taft and Charles Mead opened their building construction business, an event that marked the beginning of prosperous times for manufacturing that would span several decades and lead well into the 20th century.

In fact, by the last quarter of the 1800's, Cornwall Landing had become well-known as the largest river-based coal transit location in the east, as well as for its position as gateway to a famous summer resort offering visitors from New York City and elsewhere, gracious hotel accommodations, unparalleled scenic beauty and clean country air. They stayed at the Cornwall Mountain House, and other resorts with the names of Smith, Elmer and Glen Ridge.

The Mary Powell left Cornwall Landing at 7:45 a.m. each morning and arrived at West 22nd Street in Manhattan at 10:30AM. The afternoon commuter voyage north left its Manhattan slip at 3:30PM, arriving back in Cornwall at 6:30 p.m. Trains of the Hudson River Railroad also made daily, round-trips to the city. Meanwhile, as the Landing became more active, residents and new homeowners sought living space away from all the riverfront bustle, and so they migrated up Dock Hill Road, creating a start to the Village we know today. Open fields were turned into new streets and building lots. Neighborhoods were formed. The place to go in Village Center after 1885 was a proud bandstand, which, 100 years later, was replaced by the current bandstand. Today the bandstand remains the setting for regular summer music programs on Village Square. At the same time, Mead & Taft built large homes. Calvert Vaux, who partnered with Frederick Olmstead in the realization of Manhattan's beautiful Central Park, designed at least one building in the Village, and the community's pioneering development at Matthiessen Park had already been constructed back in 1868. Cornwall-on-Hudson finally incorporated in 1884, and opened its first post office that year. Other 'firsts' for the Village included a small electric power company and local telephone service, which claimed four initial subscribers, and a fledgling water system.

As business blossomed, so did the Village population. The 1890 Census counts 760 residents. Just 10 years later, that number had risen to 1,966, reflecting increased employment at Mead & Taft, as well as on the docks and rails. But this jump was eclipsed even more impressively by 1910, when the Census counted 2,658 Village residents. Many of these newcomers were drawn here by a pair of large public works projects: early-stage work on the Catskill to New York water viaduct, and construction of Rte. 218, as the latter was dynamited into the eastern face of Storm King Mountain and Crow's Nest. (Interestingly, this picturesque country road around the mountains, completed in 1922, preceded by more than a decade, the construction of the Storm King Bypass (Rte. 9W).)