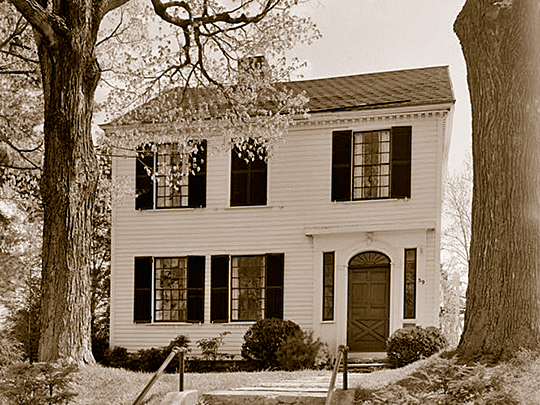 Situated between the cities of Syracuse and Auburn and a few miles from Otisco and Skaneateles Lakes, Marcellus was incorporated as a Village on June 4, 1853. Marcellus developed at the crossroads of two major transportation routes, Nine Mile Creek and Seneca Turnpike, at one time called the Great Genesee Road. The water power provided by Nine Mile Creek, an outlet of Otisco Lake, attracted a variety of individuals who built a number of mills (grist, saw, barley and woolen) on the creek and the products of these mills attracted even more individuals to the valley to work in the mills, as well as provide other services for neighboring farmers. Seneca Turnpike, an outgrowth of the Great Native American Trail that stretched across the State of New York, was a major highway in New York for people and products moving west. The original trail was practically a straight line through what would become Marcellus Village, but in 1802, when the (Seneca) Turnpike was laid out by New York State for improvement, the road-bed was changed to its present location on its way west out of the Village in order to avoid the steep climb.

Stagecoach lines operating on the turnpike would help the area, particularly the valley of the Nine Mile, to develop as a trading and manufacturing center. There were a number of business establishments on the Turnpike, including the famous Alvord House, built in 1815 and located strategically in the valley for servicing those who traveled the highway.