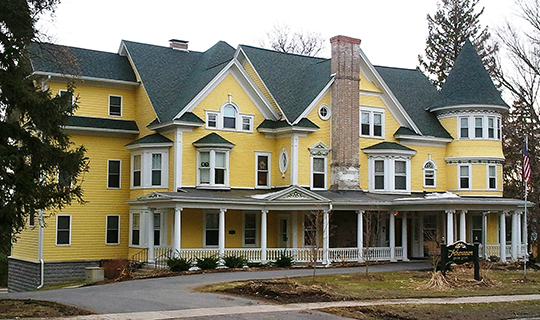 The Village of Skaneateles derives its name from the Indian phrase "Skeh-ne-a-lies" meaning "very long lake." Originally the hunting and fishing ground of the Onondaga, Cayuga, and Seneca of the Iroquois Six Nations, the land was divided into 41 military tracts granted to Revolutionary War soldiers as payment for their service. Abraham Cuddeback, his wife and eight children were the first settlers on the west shore of the lake in 1794, then known as the township of Marcellus. Two years later Jedediah Sanger purchased Lot 36, the site of the Village of Skaneateles, and soon afterwards Jesse Kellogg built and operated a dam and grist mill. The Village of Skaneateles was incorporated on April 9, 1833. Other mill, tannery, and distillery operations were quick to develop along the lake outlet, which was a major source of industry for the growing village until the 1890s when Syracuse began its siphoning drinking water from the lake.

Fertile farmland was another benefit of the lakeside location of Skaneateles. Teasel growing quickly became one of the most lucrative crops in town, persisting for over one hundred years after the first growers, William Nipper and John Snook, established the industry in 1835. Tobacco, cabbage, and dairying also became popular agricultural pursuits. The construction of carriages and sleighs making proved a profitable industry throughout the nineteenth century, and numerous boat building companies established Skaneateles as a well-known and respected name in the boating industry.

After the establishment of Skaneateles Lake as the Syracuse watershed in the late nineteenth century, industrial and agricultural pursuits declined, and Skaneateles became home to a thriving tourist industry. Early visitors arrived via stagecoach to visit establishments such as the Sherwood Tavern and Charles Kreb's Lake View House. By 1865, the Skaneateles Railroad connected the village to the Auburn branch of the New York Central Railroad, and from 1903-1930 a system of steamboat lines provided transportation between the Auburn and Syracuse Electric Trolley line. Today, Skaneateles is largely residential, yet it remains a popular destination for travelers looking to become acquainted with the natural beauty and rich history of the little village at the tip of a very long lake.