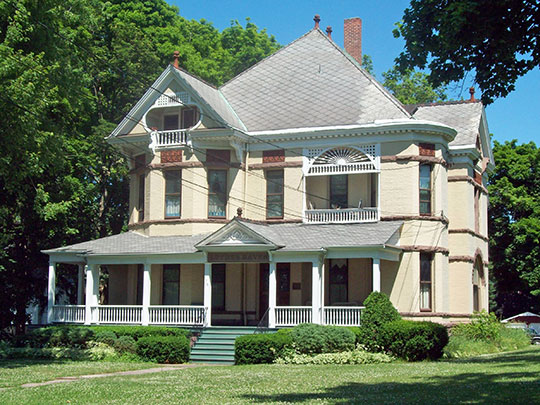 The Thomas Oliver House (175 Locust Street) was listed on the National Register of Historic Places in 1998. Text below was selected and adapted from a copy of the original nomination document. [1]

The Thomas Oliver House (Luther Haven) is located at 175 Locust Street in the City of Lockport, Niagara County, New York. The house is situated in a residential neighborhood, on an approximately half-acre parcel of land, located five blocks south of the city's main commercial district and the Erie Barge Canal. The property is bound on the south by a non-historic church, by single and multi-family residences on the west side of Locust Street, an altered nineteenth century residence on the north and by Mack Alley and a driveway which leads from Locust Street to a parking lot on the east.

Built in ca.1891-1892, the Thomas Oliver House is a two and one-half story brick Queen Anne style dwelling, which rests on a raised rusticated stone foundation with a watertable banding the house. It is characterized by asymmetrical massing, hipped roof with cross gables, slate shingles and finials, a recessed porch and projecting attic gable with Eastlake details and a wrap around porch. The southwest corner of the building, a six-sided two-story former tower had its third story and the conical tower removed in 1966 due to deterioration. Windows throughout the residence are tall double-hung one-over-one sash. Four Medina sandstone belt courses surround the building on three elevations and incorporate the window sills and lintels.

The west, or principal facade of the Thomas Oliver House features a three-sided projecting pavilion with a pedimented gable and capped with cresting and finial, which is supported by brackets and has a dentilicated cornice. A centralized entry beneath the porch accented with a pedimented gable and finial, leads to a pair of leaded-glass and oak paneled doors. The first story porch has a paneled railing, square posts and plain entablature supporting a shed roof. The second story has a recessed porch with Eastlake spindlework and is flanked by a six-sided corner.

The east elevation has a sixteen-foot gabled wing extending from the rear of the main block. The projecting molded gable has returns. A steel fire escape has been appended to the rear of the building and wraps around to the south elevation. A door has been inserted into an original window opening. Two rear entry porches exist, one on the extension with a shed roof supported by rounded brackets, while the other entry porch is attached to the main block with a shed roof and modern porch supports. A small frame shed is appended to the extension.

The north elevation also has a two-and-one-half story projecting pavilion with a pedimented gable with a centered chimney that pierces the roof-line. In 1942, a twenty-foot section of the wrap-around porch was brick enclosed to create an office and bathroom on the first floor.

The interior of the Thomas Oliver House is highly intact and retains its original design. Room configuration as well as a variety of historic fabric survives throughout the residence. The ground floor included an entry foyer, which leads into the main hallway providing access to six of the eight rooms on the first floor: sitting room, library, parlor, ladies lounge, dining room, kitchen, laundry room and den. Five sets of pocket doors separate the rooms on the first floor. All interior doors and windows are framed by hardwood fluted molding characterized by dentil brackets. The sitting room and dining room have matching quetzal lighting fixtures, original to the house. The main hallway is illuminated by a large hanging lamp with intricate filigree designs. Oak hardwood floors, some with parquet patterns, are found throughout the house. Oak wainscoting is evident throughout the house. There are four fireplaces on the first floor, which feature mosaic title with shepherd and shepherdess, grape leaf motif, and acanthus spinosus motif. All of the fireplace mantles are distinctive and three share the same cast iron grates with an embossed front depicting an oil lamp, volutes and griffins. Griffins are a recurring theme of the first floor and can be found carved into the sitting room mantle, the dining room mantle, and in the elaborate built-in dining room sideboard.

The main stairway to the second story features the original antique lighting fixture, which rests upon a wood, paneled pedestal with leaf-and-dart on cyuma reverse molding. The base of the fixture is a carved oak sphere decorated with acanthus. The north wall of the stairway landing, between the first and second floor, has a large colorful stained-glass window characterized by acanthus, anthemion, and rinceaux designs.

There are six bedrooms and one-and-one-half baths are found on the second floor. Oak wainscoting, molded woodwork and paneled doors continue throughout the second floor. The attic story is reached by the service stairs and includes three finished rooms, one full bath, and unfinished room and a large storage area.

The City of Lockport developed in conjunction with the Erie Canal during the first quarter of the nineteenth century. Speculators bought up land in the area along what was expected to be a canal route, and the first settlers including laborers, surveyors and engineers involved in canal construction. Main Street was laid out in 1819, connecting Lewiston Road at Cold Springs with the Upper Mountain Road in nearby Cambria; the remainder of the main streets were left un-built until 1820-21. In 1822 Lockport became the county seat of Niagara County, and in 1825, the year the canal opened, a jail and courthouse were erected. The village was incorporated in 1829. With the canal operating, the population of Lockport reached 2500. Additional growth was stimulated by a group of Albany capitalists who financed the diversion of water from the upper level of the canal to power factories below the escarpment in what became known as Lower Town. The construction of the Lockport and Niagara Falls "Strap" Railroad in 1836 through Lower Town furthered the development of that area and fostered a rivalry between it and Upper Town. This rivalry was further aggravated when the railroad was rerouted through the Upper Town in the mid-nineteenth century.

During the latter half of the nineteenth century, flour mills, limekilns, quarries and the Holy Manufacturing Company, which manufactured steam heating systems, formed the basis of the Lockport economy. Thomas Oliver and his brothers migrated to Lockport in 1887 from Saratoga County. For the first fourteen years, Thomas Oliver and his family resided on High Street, while his first business success in Lockport started with the manufacture of cider using a single press. A new stone mill was built in 1880 by Thomas and his brothers at the corner of Grand and Gooding Streets. The new mill consisted of five large presses that made up to 35,000 barrels of cider a year, from the apple orchards from the surrounding area. However, in 1893, the cider business was converted into the Oliver Brothers Brass Bedstead Manufacturing Company. The company became one of Lockport's most prosperous industries and soon earned a national reputation for producing the very best brass beds. Thomas Oliver was also a leading factor in the formation of the Lockport Business Association and was a founding trustee and major stockholder of the Niagara, Lockport and Ontario Power Company.

Thomas Oliver's keen business acumen and desire to see his home city thrive propelled him into politics. Winning the 1888 mayoral contest by a large majority, he was re-elected in 1889. In 1890, he promoted the idea of a Civil Service Law for public employees in the City of Lockport and after State approval, Mayor Oliver appointed a local board of commissioners.

In 1891, the Thomas Oliver House was purchased by Monford Holly, a prominent local attorney, who used it as his private residence. It was subsequently purchased in 1924 by a group of women led by Elizabeth K. Parker, and became a retirement home for eleven women, under the name "Locust Haven." The First English Lutheran Church bought the residence in 1966 and has used it as a parish house/church school.

As designed and built, the Thomas Oliver House is an outstanding local example of Queen Anne style residential architecture. This popular style originated in England in the 1860's. It was inspired by sixteenth and seventeenth century English vernacular architecture and was largely popularized through the work and writings of English architect Richard Norman Shaw (1831-1912). In this country, variations of the style gained widespread acceptance during the last two decades of the nineteenth century. The style is characterized by the eclectic and fanciful use of medieval and classically inspired ornament applied to buildings often characterized by picturesque asymmetrical forms and massing. The profusion of ornament, projections and materials create a picturesque effect that is decidedly anti-classical.

The Thomas Oliver House, with its intact form and floor plan, remains one of the finest residences in Lockport and is an outstanding, intact example of the Queen Anne aesthetic. The Thomas Oliver residence is an important local landmark and recalls the late nineteenth century history and development of the community.