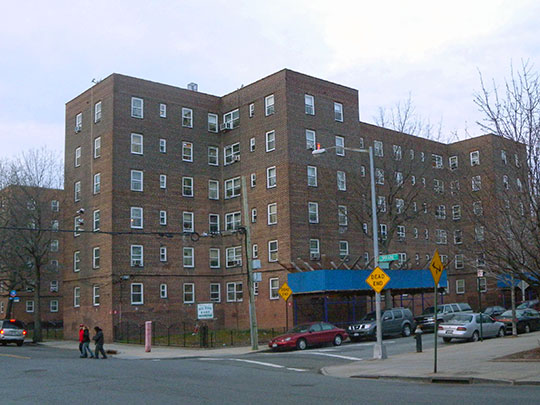 Brooklyn's Red Hook neighborhood has a large percentage of homes that were built ca. 1890-1930.

As Red Hook recovered from Hurricane Sandy, it continued to endure a contentious interplay between preservationists and developers planning the adaptation of abandoned industrial buildings into residential and mixed-use spaces. Comparatively inexpensive rentals attracted new residents at the beginning of the 21st century. [However, the "cheap" housing seems to be more and more a memory as current (2013) asking prices approach a median of approximately $1-million.] Red Hook's current residential population has increased almost 9% since 2000. Residents tend to be 5 years younger compared to the overall New York average. [1, 2]

Red Hook is defined by its proximity to water and roadways. Gowanus Bay, Erie Basin, and Buttermilk Channel form the Red Hook peninsula's southern and western boundaries, while the northern and eastern boundaries are formed by the Brooklyn Battery Tunnel, the elevated Gowanus Expressway, and Hamilton Avenue, an eight-lane thoroughfare running underneath the Gowanus Expressway. While critical to the movement of goods and vehicles, these waterways and transportation structures separate Red Hook from the rest of Brooklyn.

Red Hook prospered as a mixed maritime and residential community from the late nineteenth century until the 1960s, when the maritime industry shifted from labor-intensive break-bulk shipment to containerization. This new technology required fewer but larger port facilities with modern container ships, piers, warehousing, and distribution facilities. The Port Authority developed extensive port facilities on the New Jersey side of the harbor, which, unlike Red Hook, had sufficient upland area for container stacking as well as superior access to the nation's rail lines and interstate highways. The Port Authority undertook operation of the Red Hook Marine Terminal, Brooklyn's only containerized shipping terminal, to partially compensate for the significant employment declines experienced by Red Hook and other maritime-related neighborhoods.

Large-scale land speculation in Red Hook began in the 1830s, prompted by its location within an easy distance of the busy docks in Manhattan and the opening of the Erie Canal in 1825. The Red Hook Building Company, overseen by local Brooklyn developer Colonel Daniel Richards, acquired a large tract of land from the Van Dyke brothers. In 1838 the company proposed building hundreds of residences that would be serviced by a ferry connecting Red Hook to Manhattan. The housing plan and the ferry service were never realized and the Red Hook Building company folded. Before consolidation with New York City in 1898, Brooklyn was the fourth-largest city in the country, providing thousands of industrial jobs in waterfront factories and storehouses. The Red Hook landscape had transformed itself in fifty years from farmland to an industrial port center. Waves of immigrants from Ireland, Italy and Germany filed into South Brooklyn, settling near the docks and piers in search of employment. Most of the neighborhood residents were employed in port-related industries, holding titles such as fishermen, sailors, and dry dock laborers. Others held manufacturing positions as factory workers, carpenters, and iron workers.

Manufacturing firms that located to Red Hook during its industrial heyday included the Brooklyn Clay Retort and Fire Brick Company on Van Dyke Street; a steam pump manufactory near the northeastern end of the Atlantic Basin; the Esler and Company Boiler Factory near the southwestern end of the Atlantic Basin; and the New York Patent Felt Company on the corner of Van Brunt and William Streets. These firms, although not necessarily dependent on the shipping industry of the area, profited from their waterfront locations and often operated small piers from which they floated their goods to Greater New York. The Brooklyn Clay Retort and Fire Brick Company leased a small loading dock from William Beard at the Beard and Robinson Stores in the Erie Basin, just one block from their manufactory.

Historically, the residents of Red Hook worked on the waterfront and tolerated the noise and rhythm of industry because it was necessary for their jobs to exist. These residents walked to work on the docks and in the surrounding manufacturing areas. Commuters who work from nine to five may not tolerate the noise of industry, or, as rents rise, they may be less willing to tolerate the noise. Artists who moved into Red Hook also accept the noise from industry. The isolation and industrial interruption aspects of Red Hook kept their rents low. However, the isolation also limits job opportunities for residents of the public housing units.

Red Hook's waterfront is predominantly industrial in use, though clusters of historic housing abut the industrial buildings and vacant lots. Within the spaces are row houses and other residential structures from the later-nineteenth century that were grandfathered into the manufacturing areas. The physical proximity of the residential community to the water is an important element of historic Red Hook.