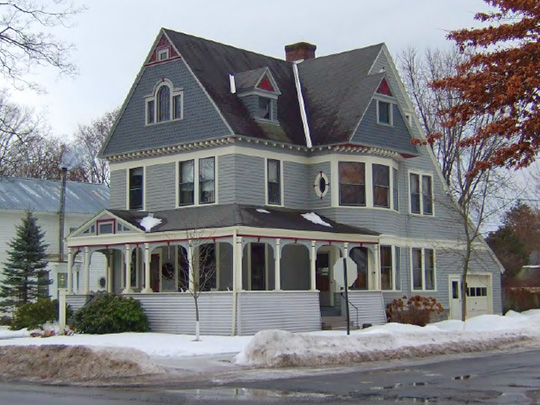 The Northville Historic District was listed on the National Register of Historic Places in 2014. Portions of the content on this page were adapted from a copy of the original nomination document. [‡]

The Northville Historic District is located within the boundary of the Village of Northville, Town of Northampton, in the northeast part of Fulton County. Northville is situated on a peninsula surrounded by the man-made Great Sacandaga Lake and is on the southern edge of the Adirondack Park. Historically, Northville was established in a valley bounded by the Sacandaga River on the west and Hunter's Creek on the east. To the north, the Adirondack mountain range extends into Hamilton County.

The historic district forms an L-shape, following Main Street from the southern terminus of the peninsula north to Bridge and Division streets; it then follows Bridge and Division streets to the western terminus of the peninsula. These streets comprise the village's central core and include its primary commercial and residential corridors. Northville retains its historic street plan; Main Street was laid out in 1797, and a grid plan was expanded to the west to accommodate new development.

Main Street, as the primary route through Northville since the early nineteenth century, developed into the principal commercial street in the village and the majority of resources in the district are directly related to the lives of the important merchants and major industrialists involved in the growth of the village. The Italianate style is predominant in the commercial core, which centers on the intersection of Main and Bridge Streets. The district provides many intact and well-preserved examples of fashionable nineteenth-century architecture, including 112, 132, and 192 North Main Street. The builder of 122 Main Street, constructed during the early twentieth century, blended the Italianate and Colonial Revival styles so the building would fit well within the existing commercial district. Examples of Northville's early residential architecture are also located along Main Street. Three examples of these early residences are the ca. 1825 Federal residence at 520 South Main Street, the 1819 Greek Revival residence at 331 South Main Street, and the ca. 1840 Greek Revival residence at 431 South Main Street.

Bridge and Division Streets developed primarily as residential streets during the post-railroad era of the village's history. The completion of the Fonda, Johnstown, and Gloversville railroad in 1875 spurred the growth of the village and resulted in a building boom along these corridors perpendicular to Main Street. Compared to the village's residential interior, the residences along the Bridge and Division Street corridors tend to be more architecturally impressive and have larger lots. The majority of the residences on corner lots in the district consciously address the corner; in many cases, their porches have a primary corner entrance highlighted by a small pediment on the porch roofline.

This higher level of architectural distinction, which is present in both residential and commercial structures within the district, reflects the public orientation of Main, Bridge, and Division streets. Among residential structures within the district, the Queen Anne and Victorian styles are most common. These vary from more high style examples, such as 141 North First Street (ca. 1910), 641 Bridge Street (1903), and 221 South Main Street (ca. 1880), to vernacular examples like 431 Division Street (ca. 1900). Though less widespread, the Italianate, Second Empire, Colonial Revival, Neoclassical, and Craftsman styles are also represented within the district. Many residential properties within the district still retain modest or large carriage houses. The predominance of these secondary buildings, and their association with residences built during the early twentieth century, points to a prolonged local reliance on travel by carriage, railroad, or stagecoach. The creation of the Sacandaga Reservoir in 1930 dramatically changed the physical and economic landscape— inundating many former Sacandaga River communities, and cutting Northville off from its railroad connection. The creation of the reservoir also offered locals an opportunity to reroute or alter the corridors of the village. They chose, however, to keep the historic orientation and built bridges on Water Street and Main Street to maintain the traditional way of traveling through the village. Both the commercial and residential buildings along these corridors self-consciously project a public face toward the road and maintain a consistent setback that unites the entire district. The district is also united by the use of sidewalks on both primary and secondary streets.

Architecturally, the district's buildings represent a range of styles varied by period and type. Integrity varies among individual properties, but, as a whole, the portion of the village within the boundary retains good integrity and many buildings retain notable architectural features and detailing. The massing and density of the streetscapes, despite a few intrusions, is characteristic mid-19th to early 20th-century.