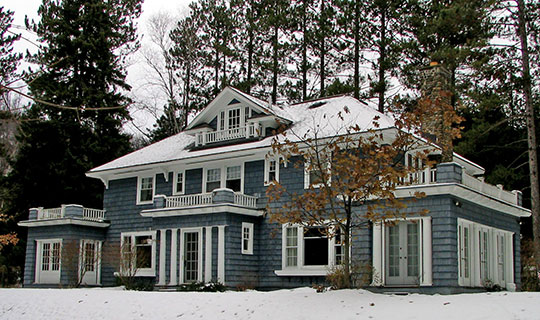 The Highland Park Historic District was listed on the National Register of Historic Places in 1992. Portions of the content on this web page were adapted from a copy of the original nomination document. [1]

The Highland Park Historic District extends approximately three blocks, in a northeast direction, along Park Avenue from its intersection with Old Military Road. It is located in the extreme northeast corner of the village of Saranac Lake, Essex County. The Highland Park Historic District is located on one of the few large expanses of flat land within the village, a broad tableland on the southeast side of Mount Pisgah. Structures within Highland Park share unparalleled views to the south and east, across the Saranac River valley and the village to the encircling mountains, which shelter Saranac Lake; Mount Baker in the east, and the Adirondack high peaks in the south. The Highland Park Historic District is bounded on the north by the property line of 170 Park Avenue, approximately 600 feet south of the Trudeau Sanatorium property; on the east by NYS Route 3 (Bloomingdale Avenue) and Grove Street; and on the south and west by Old Military Road and the property lines of 16 Old Military Road. Park Avenue, the main thoroughfare, is lined with trees and features broad, well-maintained lawns and sidewalks. All buildings are set back from the road at least forty feet on large lots.

The seventeen buildings within the Highland Park Historic District are all private single-family residences built between 1896 and 1930, the majority being constructed in the first ten years of the twentieth century, with another small construction boom in the 1920s. Many of the houses are architect-designed and display a high degree of stylistic integrity. The majority of the buildings are two and one-half stories of wood frame construction, with gabled or gambrel roofs, dormers, and wooden siding or shingles, with the notable exceptions of the stuccoed facades at 135 and 146 Park Avenue, and the half-timbering on 127, 142, 168, and 170 Park Avenue. Almost all of the residences within this district are known to have housed tuberculous individuals at various times and they all incorporate architectural features typical of the cure cottage, including second-story sleeping porches enclosed with sliding glass panels, extra-wide doorways, and call bell systems.

Highland Park Historic District is architecturally significant as an intact early twentieth century residential neighborhood designed and constructed as an upper-income enclave of single family homes, with cure related features. It was the largest and best-known of the three upper-class neighborhoods that were eventually built in the village. Among its residents were well-known local doctors, village trustees, and a number of millionaires who came to the area in search of a cure for tuberculosis, either for themselves or for a family member.

The land was originally the center of Ensine Miller's hop farm which extended for more than eighty acres across the tableland on the side of Mount Pisgah. Old Military Road, which crosses the property, is part of the route of the old Northwest Bay Road from Westport to Hopkinton. Miller had purchased the land in 1858 from the abolitionist Gerrit Smith, and he farmed it until his death in 1877. Orlando Blood obtained ownership of the parcel two years later, selling it to Dr. Edward L. Trudeau for use for his sanitarium in 1891. Not needing the additional space, Trudeau sold the property in 1894 to Dr. Ezra S. McClellan, who had moved to the area for the health of his daughter Daisietta.

The open, undeveloped land with its spectacular views and good location soon became a valuable commodity as Saranac Lake boomed in the decades around the turn of the century. McClellan began to develop the area by 1898, with the following deed restrictions:

-No building shall be erected nearer than forty feet of the street line.

-No building shall be erected that shall cost less than $2,500.

-That the property sold shall be used only for residential purposes.

[Minutes of the Meeting of the Board of Trustees, Village of Saranac Lake, December 22, 1906]

Lot sizes within the development were generally large, and the minimum construction cost was high for the time. The most unusual feature of the neighborhood was its specific exclusion of commercial enterprises, designed by McClellan to keep out private commercial cure cottages such as those already beginning to fill Helen Hill.

Frederick Seaver, a historian describing the village in 1918, made special mention of the rapid growth and exclusive nature of Highland Park:

"Park Avenue in particular is as a whole the handsomest street that I know of anywhere in a place of this size. It has been built up in the main by those who have located here either in pursuit of health for themselves or for some member of the family. Land along it which sold a few years ago at a hundred dollars an acre now commands from three thousand dollars to ten thousand dollars per building lot, some of which have only a hundred feet frontage; and realty valuations generally of two generations ago were less than the charge now often made and willingly paid for a single quarter's rental of a large and well furnished cottage. One such property was recently taken from a reluctant lessor at four hundred dollars per month, and rentals for property smaller in size or less desirably located at one hundred and fifty to two hundred and fifty dollars are not uncommon." [Historical Sketches of Franklin County, 1918, p.384]

Dr. McClellan sold the first lot out of his original parcel, 143 Park Avenue, in 1898 to George V.W. Duryee, a broker from New York City who came to Saranac Lake for his health in 1892. Duryee established an extremely successful real estate business in Saranac Lake. Duryee also served the local community as Village Trustee, a member of the School Board, and the first president of the Saranac Lake Free Library. Another early resident was Dr. Lawrason Brown, medical director at the Trudeau Sanatorium, who built his house at 142 Park Avenue in 1902. It was under Brown's supervision that the outdoor sleeping porch was developed and refined, and his own personal cure porch embodies such developments. Thomas B. Aldrich, prolific author and talented editor of the Atlantic Monthly, moved to Saranac Lake in 1901 with his tubercular son Charles, building 147 Park Avenue the following year to house the whole family. By 1910, more than half of the buildings within the Highland Park Historic District had been constructed. After Dr. McClellan died in December 1911, his daughters continued to sell the last few parcels of land within the district through the 1920s.

The Highland Park Historic District derives significance in the area of architecture as an intact collection of late nineteenth and early twentieth century, private, single family, cure cottage architecture. Cure cottages are structures that were commercial, residential or institutional in scale and expression. Many were built specifically to function as private commercial sanitoria, multiple unit dwellings, boarding houses, or private homes. Equally large numbers of cure cottages were adapted for that use from vernacular single family dwellings. All cure cottages display certain architectural features that were necessary for specific functions in the process of curing tuberculosis outdoors. Whether added at a later date or incorporated into the original building design, these features can include multiple-storied cure porches, sliding glass panels, call bells and wider-than-usual doorways without sills.

Many of the residences within the Highland Park Historic District were designed by local architects who incorporated characteristic curing features with representative examples of domestic architectural expressions popular in the late nineteenth and early twentieth centuries.

Craftsman stylistic influences can be seen in the wide eaves and exposed rafter tails of the Todd/Carl Palmer Cottage, 157 Park Avenue (1906), but the original stucco facade was covered with cedar shingles in a series of alterations and additions during the 1920s-30s. More Teutonic design influences can be seen in the clipped jerkinhead gable of 134 Park Avenue (1930), and on the Wilson Cottage, 146 Park Avenue (1904), which is said to be modeled after a tuberculosis sanitarium chalet in Davos, Switzerland, where the wife of the first owner attempted a cure before moving to Saranac Lake.

A rare local example of Mediterranean Revival style architecture stands at 135 Park Avenue, known variously as the Charles Palmer House or the Pink Palace. The result of extensive additions and remodeling in 1927, the building has smooth stucco walls, tinted pink, a classical rooftop balustrade and an arched entrance porch with broad, overhanging eaves.