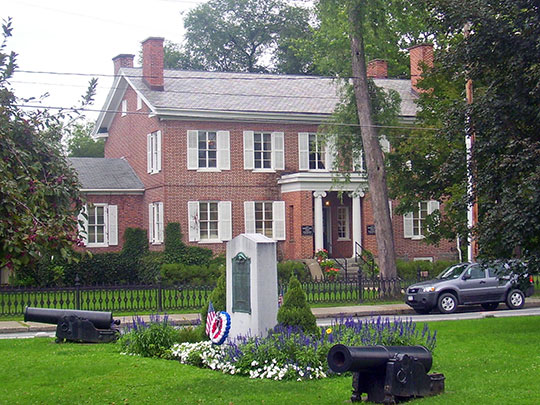 The Kinderhook Village District was listed on the National Register of Historic Places in 1974. Portions of the content on this web page were adapted from a copy of the original nomination document. [‡] Adaptation copyright © 2010, The Gombach Group.

Kinderhook Creek rises in eastern Rensselaer County and flows in a southwesterly direction through a part of Columbia County where it empties into the Hudson River. At a bend in the creek about five miles inland from the Hudson River are a stretch of fertile flatland and, situated on a plain west of the creek and slightly higher in elevation, the village of Kinderhook. The Kinderhook Village Historic District comprises the heart of the village, extending roughly north-south along U.S. Route 9 (Broad Street and Chatham Street), the Old Post Road, and east-west along County Route 21 (Albany Avenue and Hudson Street). Included within this area are Sylvester Street, Church Street, William Street, Kinder Knoll Road, Maiden Lane, Jarvis Lane, Railroad Street, and a portion of Sunset Avenue.

The Kinderhook Village Historic District contains approximately 250 structures of which about 200 predate the 20th century. Approximately a dozen 18th century buildings remain, while the majority of the rest date from the first half of the 19th century. The predominant building materials were clapboarded wood frame, and brick. Ranging for the most part from 1 to 2-1/2 stories in height, the structures within the Kinderhook Village Historic District are harmonious in scale. Coupled with a wide range of building functions, the diversity of building styles — in several instances attaining a striking degree of sophistication lend to the district a singular vitality.

The earliest remaining structures are those which date from the village's predominantly Dutch period. The wood-frame Cornelius Schermerhorn House (33 Broad Street), built in four sections between c.1713 and c.1770, illustrates the one-and-one-half story five bay, gable-roofed building form common to farmhouse design in the Dutch Hudson Valley. By the middle of the 18th century the Dutch in this area were using the gambrel roof, represented in Kinderhook by the one-and-one-half story John Pruyn House (26 William Street) and the one-and-one-half story dwelling at 15 Hudson Street, distinguished by its brick front and clapboarded sides. The former, dated 1766 by glazed-brick headers inlaid on the side walls, is a particularly large house, of special interest for its muiztander brick pattern on the gable end and steep lower slope of the roof.

David Van Schaack's two-story brick residence, (24 Broad Street) described as "a house like a castle: when it was built in 1774, possesses the substantial dimensions and restrained neo-classical formality typical of a gentleman's elegant rural residence of the last half of the 18th century. Four interior end chimneys, a hipped roof, and a Palladian window further characterize this example of the style.

The major embodiment of the architectural style characteristic of the federal period is the James Vanderpoel House (16 Broad Street), designed in 1810 by Barnabus Waterman of Hudson. A two-story, five-bay-by-three bay, gable-roofed, brick residence, the Vanderpoel House possesses the smooth wall surface, elliptical forms, and delicate classical motifs characteristic of the style. The popularity of this style throughout the village is evidenced by the abundance of exterior and interior trim executed in this mode — for example the small dwelling at 29 Hudson Street.

Present but visually less prominent are the revivalist styles of Greek Revival and Gothic Revival; the former today best represented by the two-story, wood frame pilastered dwelling at 29 Broad Street, and the latter by the board and batten cottage at 28 Albany Avenue and St. Paul's Episcopal Church (8 Sylvester Street). The substantial two-story brick dwelling at 4 Albany Avenue might once have born Greek Revival trim but today is ornamented with the more elaborate detail associated with the bracketed styles of the mid-19th century. The popularity of these styles is clear from the profusion of ornament and outline commonly associated with this architectural period. The rectangular flat-roofed building form is illustrated by the wood-frame residence at 14 Sylvester Street, the brick Post Office (a former bank, 2 Broad Street), and the far simpler wood-frame residence/store at 24 Hudson Street. In the large residence at 46 Hudson Street are combined such features as asymmetrical outline, variety in silhouette, round and round-headed windows, and an imposing square tower covered by a mansard roof.

Construction during the last half of the 19th century appears to have been largely confined to simple dwellings and commercial structures at the village center. The former are plain, wood-frame rectangular, gable-roofed buildings, sometimes two such forms set at right angles as in the case of 31 Albany Avenue. The row of commercial structures on Hudson Street at the village center replaced a series of clapboard wood-frame buildings destroyed in a major fire on May 9, 1880.

The survival of a variety of "dependencies: lends to the Kinderhook Village Historic District — replete with residential and religious structures — a special dimension. In addition to the cluster of 19th century commercial buildings at the main intersection, there are throughout the Kinderhook Village Historic District structures such as: a 19th century livery stable (3 Hudson Street), a Dutch Barn (Broad Street), a false-front grain storage barn (22 Hudson Street), a small stone smokehouse (Broad Street), a former forge (3 William Street), and a small, one-story, gable front shop once a hoop skirt factory and once a harness shop.

Still bordered by the rich flatlands of Kinderhook Creek that sustained the community's agricultural prosperity for almost three centuries, Kinderhook Village contains an exceptional collection of 18th century and 19th century architecture — both domestic and commercial, simple and pretentious. The present Kinderhook Historic District, comprising the heart of the Village is distinguished for the quantity and quality of its architecture as well as its illustration of the development of an early Dutch community over a period of three centuries.

Attracted by the low, wet flatland along Kinderhook Creek, Dutch farmers from the Fort Orange settlement (Albany) to the north first settled at Kinderhook during the 1650's and 1660's. The first roads appear to have followed the edges of the rich flatland, and the early dwellings were erected on the ridge overlooking a bend in the creek. A settlement of 15 houses and a Dutch Reformed Church in 1763, by 1813 the village of Kinderhook contained "20 or 30 dwellings, several of which, in the style of county seats are very elegant, several stores, shops, etc., a church and an academy."[1] Agricultural prosperity generated a network of roads, luring the Kings Highway or Post Road inland, and necessitating a major route to the river landing from which produce, especially wheat, could be shipped south to New York City by sloop.

The considerable agricultural capacity of the land produced a period of considerable growth during the 1820's — evidenced by the quantity of domestic architecture from this period. Described as "one of the most important business places in the county," Kinderhook in 1836 — two years prior to incorporation — contained three dry goods stores, two groceries, one stove and hardware store one wool warehouse, hat factory and store, a furnace for castings, a mill Wright shop, two carriage makers, three smiths, two tailors, three shoe makers, one saddle and harness maker, plough maker, painter and glazier, a watch and jewel store, a printing office, book store, three public houses, four lawyers, and four physicians. In addition to two churches, an academy "in much repute," and "one district and two select schools for misses," the village had a total of "86 dwellings, distributed upon seven streets, some of which, large and remarkably neat, are surrounded with pleasant lawns, adorned with shrubs."[3] Seven years later the population stood at 1400, and the dwellings at about 200, figures which would seem to support the contention that in 1843 "no place in the vicinity of Hudson exceeds this village for its beautiful location, and the salubrity of its climate." — and, one might add, its economic health.[4]

Although the village throughout much of its history produced a number of political figures on the local, state, and national scenes, the best known, Martin Van Buren, achieved prominence at this period, serving as Vice-President under Andrew Jackson and 8th President, 1836-1840. Born and raised in Kinderhook where his father was a farmer and innkeeper, Van Buren retired to Lindenwald, a country seat south of the village which he had purchased in 1859.

With the construction of rail lines in the 1850's and 1860's, most commercial and industrial enterprise was diverted westward to the rail depots and the village of Kinderhook retained for the most part only its agricultural base on which to depend.[5] However, the settlement's visual and salubrious appeal remained unimpaired for Kinderhook in the 1870's was "known chiefly as being the home of a large and respectable class of people whose means have permitted them to retire to this place to enjoy the refinement and culture it affords.

The village today continues as a largely residential community of landed farmers and professionals. The latter are both retired and active for the popularity of the horseless carriage and the improvement of roadways has brought Kinderhook within commuting distance of the urban Capitol District to the north. In anticipation of future growth the Village Government has adopted a Comprehensive Development Plan including an ordinance to protect the Kinderhook Village Historic District.

The historic resources within this district are outstanding both for the quantity and quality of 18th and 19th century structures still present. Twentieth century intrusions are minimal at the heart of the district and for the greater part of its outer reaches. The visual character of the community is therefore unusually "historical." This consistency is match in distinction by the range and high quality of both modest and pretentious vernacular architecture — in some respects common to the period, in others unique to the Dutch settlements once scattered in the Middle Atlantic States. What distinguishes Kinderhook Village from others is the remarkable survival in their agricultural setting — of structures representing a diversity of architectural styles and community functions, illustrative of a very prosperous inland village during the 18th and 19th centuries.