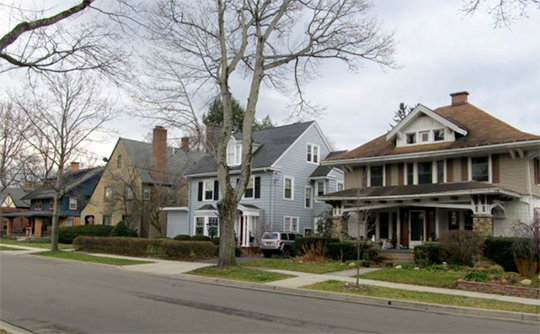 The Lakeview Avenue Historic District was listed on the National Register of Historic Places in 2017.

The district is a predominantly residential neighborhood composed mainly of single-family houses built from the 1850s to the 1950s as Jamestown's population grew and spread outward. Buildings in the district, most of which were built as single-family houses, exemplify the range of domestic architectural styles that were popular from the mid-nineteenth to mid-twentieth century, with most built between 1891 and 1930 when the neighborhood was served by an electric streetcar line. Lakeview Avenue, running north-south, forms the spine of this linear district and was historically one of the most architecturally sophisticated streets in Jamestown, where many of Jamestown's leading business owners and professionals built spacious, fashionable houses. Side streets perpendicular to Lakeview Avenue began to develop later in the nineteenth century as Jamestown's population spread outward; some side streets east of Lakeview Avenue are included in the district as these display comparable development patterns, architectural quality, and integrity. The district also includes Lake View Cemetery and the Old Catholic Cemetery, mid-nineteenth rural cemeteries that were popular destinations for Jamestown residents; an important impetus for the inauguration of the Lakeview Avenue streetcar line, the first electric streetcar route opened in Jamestown, was to facilitate cemetery visitation. The historic pattern of development along Lakeview Avenue and surrounding streets remains visible in the historic fabric of the district, with buildings and streetscape characteristics illustrating the transition from rural road to fashionable suburban boulevard to Streetcar Suburb.

The majority of properties in the Lakeview Avenue Historic District are residential. The neighborhood developed as an area of single-family suburban houses, some of which have been divided into multiple apartments; a handful of historic buildings in the district were built as double houses, and there are also a few multifamily apartment buildings constructed in the late twentieth century, after the period of significance. There is one church in the district, Christ First United Methodist Church at the southwest corner of Lakeview Avenue and Buffalo Street, and one building constructed as a school, the former Euclid Avenue School on Euclid Avenue. The district also includes Lake View Cemetery, a rural cemetery dedicated in 1858, which extends from Lakeview Avenue west to Main Street and from Buffalo Street to Marvin Parkway, and the Old Catholic Cemetery, surrounded on three sides by Lake View Cemetery.

Streetscapes in the district are consistent with late nineteenth to early twentieth century suburban streetcar-oriented development, characterized by rectilinear lots that are deeper than they are wide, sidewalks parallel to the street, and relative consistency in setback, orientation, and massing of the houses. Although these general characteristics are consistent throughout the district, there are differences between the older streets (Lakeview Avenue, Winsor Street, Crossman Street, and Van Buren Street) that were created in the mid-nineteenth century, and the newer streets (Spruce and Chestnut) that originated at the end of the nineteenth century and were developed in the early twentieth.

Houses in the Lakeview Avenue Historic District vary widely in architectural character, displaying great diversity of form, style, and materials; this variety reflects the long period in which this neighborhood developed, during which architectural fashions and building techniques changed considerably. The most consistent architectural characteristic is height, with most buildings two or two-and-one-half stories tall plus an attic. One-story houses, dating to the 1950s, are typically one story in height and occur mostly around the intersection of Lakeview Avenue and Newton Street and at the east end of Spruce and Chestnut Streets. The tallest structure in the district is the steeple of Christ First United Methodist Church.

Houses in the district represent a range of popular domestic architectural styles from mid nineteenth century Greek Revival to post-World War II Minimal Traditional and Ranch. Styles that were popular from the 1890s to the 1920s are particularly common, including Queen Anne, Colonial Revival, Tudor Revival, and Craftsman. In general, most high-style architectural examples, including architect-designed houses, occur on Lakeview Avenue and Winsor Street; houses on the side streets tend to be more vernacular interpretations of the styles. Although the city generally developed from south to north, Lakeview Avenue does not reflect this progression, as mid-nineteenth century farmhouses and late-nineteenth century suburban estates are interspersed with houses dating to the early twentieth century. Houses on Spruce and Chestnut streets, most of which were built between 1900 and 1930, are more consistent in architectural character and style, representing vernacular interpretations of Craftsman and Colonial Revival motifs.

When the Jamestown Street Railway Company expanded its downtown horse-drawn streetcar route into an extensive network of electric streetcars, starting with the "Lakeview Avenue and Cemetery Belt" in June 1891, Lakeview Avenue became the spine of streetcar-oriented residential development as Jamestown's rapidly growing population spread beyond the downtown core into the surrounding area. Real estate investors like Edward Morgan subdivided and marketed suburban tracts adjacent to the streetcar line as healthy, attractive, and convenient locations for family living, and a new wave of prosperous residents moved into the neighborhood as the ability to commute via streetcar made life along Lakeview Avenue feasible for a broader spectrum of residents. The construction of a new school in the neighborhood in 1911 was evidence that this once-remote section of Jamestown was a booming residential section.

As automobile ownership, a novelty in the first few years of the twentieth century, became more common among the Jamestown's most prosperous citizens, residents of Lakeview Avenue built garages and petitioned for the paving of the avenue, which was accomplished in 1908. Many houses along the side streets, particularly at the north end of the district, were built with garages in the 1910s and 1920s, when car ownership was an expectation rather than a rarity.

The 1930s saw both the end of the streetcar era and the start of a long period of economic decline in Jamestown. Lots in the Lakeview Avenue area that had not been filled by the onset of the Great Depression generally sat empty until after World War II, when a flurry of new activity brought the construction of new houses and a sophisticated mid-century modern church, now Christ First United Methodist Church, in the district. New construction after the early 1960s in the district has consisted of a few multifamily apartment buildings on large lots formerly occupied by mansions.

The district is also an outstanding intact collection of nineteenth and early twentieth century residential architecture in Jamestown that documents the transformation of the corridor from remote rural outskirts to fashionable suburban enclave, then to a convenient commuter suburb, a process that occurred in tandem with Jamestown's decades of peak prosperity and growth. Houses in the district include high-style and vernacular Greek Revival-style farmhouses built in the mid-nineteenth century, late nineteenth and early twentieth century examples of high-style domestic architecture designed by notable architects, and more modest interpretations of popular styles designed by builders. The cemetery also contributes to the district's design significance, as an excellent example of the nineteenth-century rural cemetery movement.

The street now known as Lakeview Avenue appeared on early maps as one of two north-south routes from downtown Jamestown into the city's outskirts and beyond. It was originally known as Henry Street, named for Henry Baker, who had purchased extensive property from James Prendergast in 1836; the name of the road was officially changed to Lake View Avenue in 1865. Baker is said to have planted street trees along Henry Street, but otherwise the road was in rough condition until at least the 1860s. By the middle of the nineteenth century there were just a handful of houses along the entire length of Henry Street, which extended from Sixth Street north to Oakhill Road, north of Buffalo Street. Henry Street ran parallel to "Fredonia Road" (now North Main Street), one of a number of plank roads established in Chautauqua County in the mid-nineteenth century to improve the primitive road conditions. Lakeview Avenue functioned as a toll-free alternative to the plank road: travelers headed for Jamestown were able to bypass the toll booth by turning west on Oakhill Road, which continued through what is now the north half of Lake View Cemetery (the diagonal alignment of the road is still easily visible in the cemetery's road system) and continuing south along Henry Street.

In the mid-nineteenth century, few residents of Jamestown lived as far north as Sixth Street. The Crosby family was one of the first to move to this part of the village. Samuel C. Crosby, a native of Vermont, came to Jamestown in 1833; he worked in the post office for a few years and in 1838 opened a general store. He married Mary Ann Foote, daughter of Dr. Eliel Foote, in 1841. In around 1849, Dr. Foote deeded to his daughter five acres of land at the intersection of Sixth Street and Lake View Avenue; Samuel and Mary Ann built their house there. The Crosby property extended from Sixth Street past what is now Eighth Street, and from Lakeview Avenue to what is now Liberty Street (historically Crosby Street). The 1867 map of Jamestown shows the Crosby house set well north of Sixth Street close to Lakeview Avenue; her father's house can be seen farther east on Sixth Street.

In the last quarter of the nineteenth century, Lakeview Avenue transformed from a rough rural road into a fashionable suburban boulevard as owners of large properties, including the Crosbys and Butlers, subdivided them into residential lots. In comparison to the increasingly crowded and industrializing city center, Lakeview Avenue and other locations in the city's hilly outskirts offered more space and cleaner air; as its name suggests, Lakeview Avenue (like the cemetery for which it was named) also offered views of Chautauqua Lake. These qualities made the avenue a desirable location for Jamestown's prosperous citizens who could afford a suburban lifestyle.

Many of the names of property owners along Lakeview Avenue on the 1867 map of Jamestown are those of the extended Price family: Wilson and Addison Price both owned property on the east side of Lakeview Avenue, as did Abel Kimberly (married to Eunice Price). Phineas and Caroline (Price) Crossman's house was on the west side of the avenue, as was that of Reuben Green (married to Anna Price). Abel Kimberly, like Wilson and Addison Price, was listed in city directories as a carpenter, and like them he may have also been a builder. At least three members of the next generation, Addison's sons Fred, Henry, and Oscar, were also involved in building and real estate. Oscar was also the first mayor of Jamestown.

Phineas Crossman's real estate ventures in the second half of the nineteenth century were extensive. The 1870 census indicates the value of his property was $47,000; his wife Caroline also owned $10,000 worth of property. (By comparison, his brother-in-law Abel Kimberly's property value was valued at $2,000.) One issue of the Jamestown Journal, dated December 25, 1868, listed 17 recent houses "built by Phineas Crossman on or near Lake View Avenue." These ranged in price from $300 to $2,000 and included one for A.N. (Adam Neff) Price, another of Charles and Mary's children. Twelve of the 17 were built for specific owners, with five built on speculation. Cross-referencing the named purchasers against the 1875 city directory shows that Crossman's houses were built on Fulton, James, Crossman, and Kent streets in addition to Lakeview Avenue; his land holdings appear to have been mostly on the west side of Lakeview Avenue.

In an ad that ran in the Daily Journal in 1873, Phineas Crossman advertised 240 village lots, to which he ascribed a total value of $110,000, including properties on Lake View Avenue, Kent, Crossman, and other streets. The ad noted that property values were certain to increase due to the advent of the Buffalo & Jamestown Railroad (incorporated in 1872) and construction of new factories; it went on to describe the "sacred duty" of every man to put aside money to provide his family with a comfortable permanent home.