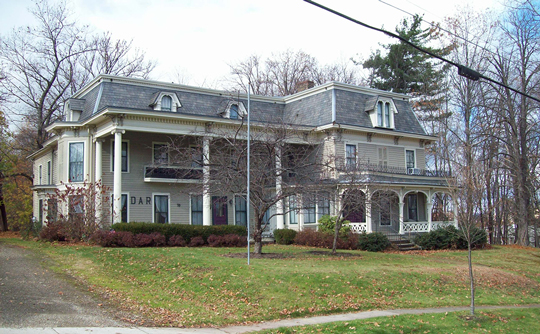 The early settlement of the City of Jamestown, started on the north side of the Chadakoin River known as "The Rapids," was purchased from the Holland Land Company in 1809 by the Prendergast family. In 1810, John Blower built the first log house at "The Rapids," in which he operated a tavern for keelboatmen, who sold their goods between Pittsburgh and Mayville. The following year, James Prendergast built a long house saw mill and mill dam on the north bank of the river. By 1815, the year the settlement officially received its name, Jamestown consisted of a clearing of about sixty acres with only thirteen families in residence. Jamestown, at this time had a general store, a blacksmith shop, a sawmill, a gristmill and a wool carding business. Many of these businesses were located on the north side of the river, along Main Street between First and Fourth Streets.

The initial growth and development of the settlement was spurred on locally by the abundance of natural resources. The lumber furniture, and textile industries were established. The Chautauqua Lake Outlet supplied the waterpower for the mills and machinery, and the Allegheny River provided transportation for the distribution of manufactured goods to outside markets. The developing furniture industry would always play an important role in Jamestown history. Phineas Palmiter, emigrated from Rhode Island and established himself as Jamestown's first furniture maker. He was a carpenter, joiner, millwright, machinist, and metal worker, but James Prendergast first employed him in the erection of buildings for the expanding village. In 1827, Palmiter established a chair factory on East First Street. At this early stage, furniture was produced for local sale only, but by 1825 Royal Keyes was shipping furniture to southern markets. Between 1814 and 1823 the woolen industry began with a wool carding establishment, the first woolen mill and wool-weaving factory. In the fall of 1835, Joel Partridge, a local carpenter and joiner, bought a half interest in a pail and tub factory, which became known as the Wood and Partridge Company.

The early roads of Jamestown were primitive, but a wooden bridge, built in 1814, at the foot of Main Street connected the south side of the village. The poor road condition of the first half of the nineteenth century in the Chautauqua County region of the Holland Land Company made water travel a key mode of transportation for Jamestown. Locally manufactured items were shipped on boats for sale down the Chadakoin River and Conewango Creek to the Allegheny River and the Ohio River in flat and keelboats. Water transportation was most important until the advent of the railroads in 1860.

The railroad presence encouraged further expansion of industry by providing a reliable network for distribution of goods. Jamestown's first railroad was the Atlantic and Great Western Railroad, which arrived in 1860. This line was later operated by the Erie Railroad that offered both passenger and freight services between New York and Chicago and operated another branch from Jamestown to Buffalo. The railroad paralleled the Chadakoin River and helped to greatly expand the industrial corridor in the heart of the city. Jamestown's population increased dramatically after the introduction of the railroad, from 3,155 residents in 1860 to 15,000 residents in 1886, the year in which Jamestown achieved city status.