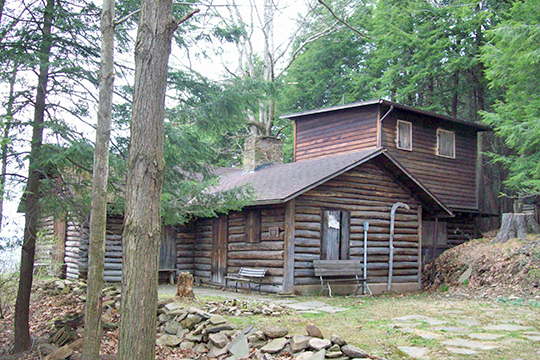 The Town of Portville [1] is located in the southeast corner of Cattaraugus County in the State of New York, bordered by Pennsylvania on the south and Allegany County on the east. Until 1837 it was located in the Town of Olean. When white men began arriving in the early 19th Century, they found settlements of Native Americans. The Senecas were a subdivision of the greater Iroquois Confederacy. Southwestern New York was one of the last undeveloped areas in the state in the early 19th century. Virgin pine, hemlock and deciduous trees covered the hills and valleys.

The first settler was James Green, who built a saw mill on Haskell Creek in 1805. In 1813 Alfred, Daniel and Lynds Dodge purchased a large track of land that encompassed what is presently the Village of Portville. They built a saw mill on the waterway that became known as Dodge Creek. It flows southeast through Portville into the Allegheny River and benefits from the tributaries of Deer and Wolf Creeks. That made it an ideal place to build a water mill in what is known as Mayville, an area in the northeastern part of the Town. Another early settler and lumberman was William Pinkerton Jr. who purchased over 500 acres in the area.

The abundant pine forest soon came to the notice of a lumberman from Deposit, NY who had operations in the Delaware River Valley. Forming the company of Dusenbury, Wheeler and May, they purchased the mill and land owned by the Dodge family in 1833 and expanded the operation. Soon rafts of lumber were sent down the Allegheny River in the spring of the year to markets in Pittsburgh and beyond.

Rough log cabins and a boarding house were built for the lumberman and workers who arrived. They also built a gristmill to grind grain when more families moved into the area. A store was built and Dusenbury began stocking it with merchandise he brought from Deposit. Other large lumber operations soon arrived in Portville. These were mills located on the banks of the Allegheny operated by the Weston Company in Weston Mills and the Mersereau Company in the eastern part of the Town.

By 1850, most of the large pine trees had been felled. Allied industries began to spring up utilizing the lumber from the maple, hickory, basswood, cherry, and ash trees. Among these were basket, shingle, veneer, sash and lathe and kindling wood mills and factories. Good quality lumber could not be cut from the abundant hemlock trees. However the bark of the hemlock was necessary for the tanning of hides. Two large tanneries were established.

In 1856 the Genesee Valley Canal was extended to Olean and Portville connecting the Allegany River to the Erie Canal. Its use was short lived with the coming of the Western New York and Pennsylvania Railroad in 1874.

After trees were cut, land was cleared in the valleys for cattle and dairy farms, sheep farms and the production of maple sugar. Population grew and a cluster of stores selling food, shoes, dry goods and all the necessities of life centered on what is today the Village of Portville, incorporated in 1895. A post office and company store was built in Weston Mills.

A water supply for the Village was funded in 1896. Previously water wells supplied the water and still do for people who live in the Town. A fire department was formed the same year. Later a fire department was built in Weston Mills. Fires had destroyed the business block in the Village in 1875 and 1885 and the Presbyterian Church in 1895.

An association in 1898 established the Chestnut Hill Cemetery. Earlier cemeteries were the Old Portville Burying Ground on Pine Street, East Portville Cemetery in Main Settlement and the Oakley Cemetery in Weston Mills.

In the 1890's gas for illumination purposes was supplied for houses and streetlights. Electricity arrived to power the trolley of the Olean Street Railway Company. It was extended to Portville and later south and east to other towns when a new plant in Ceres, PA boosted the power. Electricity later became available for houses and businesses. In 1901 The Pittsburgh, Shawmut and Northern Railroad began constructing tracks and bridges, utilizing the towpath of the canal for the railroad bed.

The first one-room schoolhouse was built in 1830 followed by nine others throughout the town. In 1875, a large frame schoolhouse was built in the Village followed by a brick school in 1904. In 1952, the Portville Central School building was formerly opened for elementary and high school students. Pioneer Memorial Park was built in the Village in 1938. The gazebo there honors early settler John Morris. Another park with a playground for children and picnic facilities is located along Dodge Creek in the Town. It honors former Police Chief and Village Superintendent Lyman Baker.

Portville contributed and lost its sons during the American Civil War, Spanish American War and World War I and II. Memorials in the cemetery and Pioneer Park honor all of these men and women.

The Portville Free Library and the William E. Wheeler House in the Village and Bedford Corners in the Town are listed on the State and National Register of Historic Places. During the 20th Century, employment opportunities in Portville declined while those in the neighboring city of Olean grew. At the same time transportation improved and allowed people to easily travel to work, and for shopping and medical care. As a result, many services and businesses in Portville closed.

Today Portville is a quiet, walkable community located along the Route 417 bike trail. The dyke system that was constructed after the 1942 flood provides another hiking option for our residents who love the outdoors.