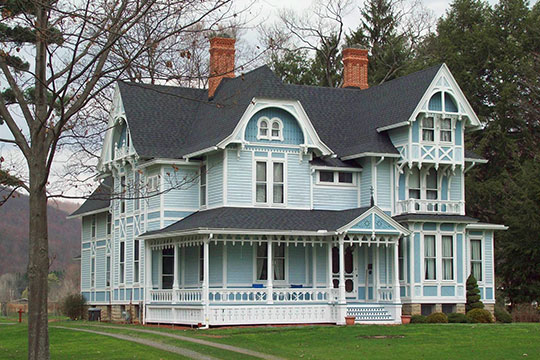 Portville was incorporated as a village in 1895.

Prior to the arrival of white settlers, this entire area of Cattaraugus and Allegany counties had been the home of the Iroquois Indians, who ceded the land to the Holland Land Company in 1797. In the following year, the first white settlers arrived in what is now Cattaraugus County: a group of Quakers sent by the Philadelphia Yearly Meeting of Friends on a mission to the Seneca Indians.

European-American settlement in the area occurred slowly during the first years of the 19th century, and what is now the Town of Portville. It was first settled in 1898. A saw mill was constructed in the following year by Gideon Haskell, and three years later, the Dodge brothers arrived and settled on Dodge Creek, a tributary of the Allegany River that provided hydropower for Portville's industries during the 19th century. One of the Dodge brothers is credited with building the first frame house in the Village of Portville in the 1830s.