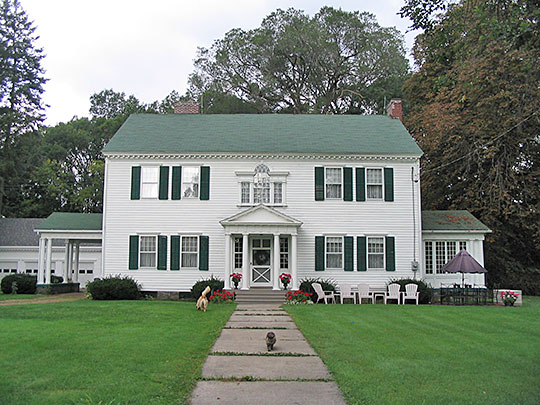 Broome County was formed from Tioga, March 28, 1806, and named in honor of John Broome of New York, who was then Lieutenant Governor of the State, and who acknowledged the compliment by presenting the County with a handsomely executed silver seal, appropriately designed by himself, emblematical of the name. Berkshire and Owego were annexed to Tioga County, March 21, 1822. It is situated near the center of the south border of the State, centrally distant 110 miles from Albany, and contains 706 square miles. Its surface is greatly diversified, consisting of rolling and hilly uplands, broad river intervales and the narrow valleys of small streams. The hills extend from the Pennsylvania line northerly through the County. They are divided into three general ranges by the valleys of the Susquehanna and Chenango rivers. The first range, lying east of the Susquehanna, forms the east border of the County. Its highest summits are 400 to 700 feet above the Delaware, and 1,400 to 1,700 feet above tide. The declivities of the hills are usually steep, and the summits spread out into a broad and hilly upland. This ridge is divided by the deep ravines of a large number of small streams, and in several places it rises into peaks. The second ridge lies in the great bend of the Susquehanna, and is bounded by the valleys of that river and the Chenango. The highest summits are 300 to 500 feet above the Susquehanna, and 1,200 to 1,400 feet above tide. The hills are generally bounded by gradual slopes, and the summits are broad, rolling uplands. The southern portion of this ridge is high above the valleys ; but towards the north the hilly character subsides into that of a fine rolling region. The third ridge lies west of the Chenango and Susquehanna rivers. Its summits are a little less in elevation than those of the second ridge ; and the general characteristics of the two regions are similar. The wide valley of the Susquehanna divides it into two distinct parts, the southern of which is more hilly than the northern. The hills in the central and western parts of the County are rounded and arable to their summits. The narrow valleys that break the continuity of the ridges are usually bordered by gradually sloping hillsides.