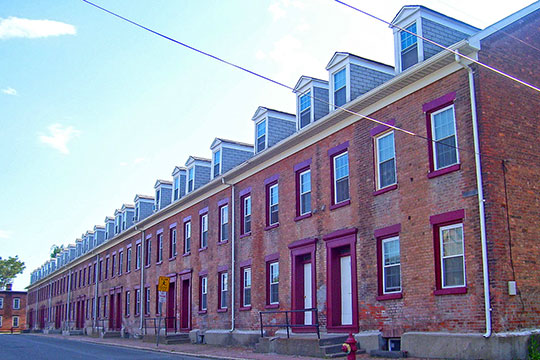 The Olmstead Street Historic District was listed on the National Register of Historic Places in 1973. Portions of the content on this web page were adapted from a copy of the original nomination document. [‡]

Curving along a line determined by an arm of the first Erie Canal (1836-44) later used as a power canal, the Olmstead Street row houses look over the canal and face the monumental Ogden Mill. Together, mill and tenements form the Olmstead Street Historic District, and the district boundaries, encompass their rear property lines. Today the canal which divided the living and working world of the district's 19th century residents has been filled in, and the space is being made into a park with a fountain through a Model Cities Program.

The over-all effect of the row houses is one of uniformity of material, design and scale; however, each of the three housing blocks (#1-27, #29-37, #39-49) has some individual characteristics probably reflecting a difference in construction date. The block including #39-49 on the northwest corner of Ontario Street and Olmstead Street is three stories. It is brick with a rubble base, eighteen bays wide on the front (east) facade and four bays wide on the south (Ontario Street) side. The rowhouses have a gable roof, seven chimneys and a corbelled cornice along the front. The windows have stone trim and sills and the paired doorways which open onto stoops have wooden trim with a three-panelled front door and single transom above.

#29-37 Olmstead Street is attached to #39-49 on a slight convex angle to the street. It is two stories high, brick with a regular ashlar base, 15 bays wide on the front (east) facade and 3 bays deep on the side (north). It has a flat roof, simple cornice and the windows are larger than those at #39-49 with wood trim.

On the northwest corner of Olmstead and Van Vechten Streets #1-29 is the longest of the Olmstead Street rows — 42 bays wide on the front (east) facade. It is 2-1/2 stories high with dormers. Many details are similar to those of #39-49 which was apparently built at the same time. The windows have stone trim, the foundations are rubble stone, and the doorways have the same pedimented lintels and are paired with cement stoops.

The mill is located on the east side of the old canal bed. The north and south sections of the mill (1846 and 1844 respectively) are 3-1/2 stories high with gable roofs and corbelled brick cornices. A square four story tower is centered on the 24 bay wide west facade of each section. The window openings have simple stone lintels, and most windows have twelve-over-twelve sash. The 4-1/2 story central portion (1859) is seven bays wide and juts out on the east and west facades. This section has a low pitched gable roof and a cornice with modillions. All windows on the fifth floor are trimmed with brick arches and those on the first four stories of west and east facades with segmental arches.

To the east of the mill are two brick, one-story, outbuildings: one is a garage and the other an eight bay wide structure with two arched doorways.

The mill parallels one of the city's major streets, Remsen Street, and is approached at the terminus of Oneida Street beside the Cohoes Music Hall which is already listed on the National Register.

A microcosm of mid-nineteenth century industrial history is embodied in the grouping of mill, canal, and mill housing in the Olmstead Street Historic District located in the center of Cohoes. The Olmstead Street Historic District still retains the sense of a cohesive community, detached from the city which surrounds it, as the rows of tenements and massive mill look inward toward each other across the remains of the canal which is now a park.

Cohoes's industrial development into a major textile center began early in the nineteenth century with the harnessing of the 86 foot high falls in the Mohawk River just north of the city. The Cohoes Company, the forerunner of a modern utility company, built the dam across the falls and also constructed a network of power canals which formed the physical framework of the future development of the city. Manufacturers of cotton, woolen and iron products purchased rights along the canals and constructed mills.

The Erie Canal, also, ran through the city and by 1844 the volume of traffic on the canal necessitated its enlargement with double locks and led to the relocation of the canal to the west of the growing city. An abandoned section of the Erie Canal terminating at Ontario Street was incorporated into the Cohoes Company power canal system and that year along the east side the company built a cotton mill. Two years later a second mill, similar in almost every detail, was built sixty feet north of the first. These two structures known as the Odgen Mills are the north and south sections of the present-day mill. Two brick blocks of tenements were also built across the canal on a street named for Charles A. Olmstead, the Cohoes Company agent and the former supervisor of the power canal construction.

A reversal of the relative positions of these two companies occurred in the next twelve years. In September 1849 workers struck at the Ogden Mills over a 15% reduction of wages which was settled when "Agent Mr. Charles A. Olmstead advertised at once for outside help which was procured and work resumed after a stoppage of three weeks."[2] In 1851 the Ogden Mills failed, and the buildings once again became the property of the Cohoes Company. The pair of mills changed hands several times before they were bought by the Harmony Company which had been expanding over the past decade with the construction of a new mill in October 1853. The Harmony Company enlarged the former Ogden Mill buildings with the four and a half story central portion joining the two earlier sections. The immense mill was considered in 1886 to be "the most complete in all its appointments of any cotton mill in the world."[3]

Today the mill is owned by a shirt company and the row houses by various owners, hence the Olmstead Street Historic District is no longer dominated by a single company as it was originally but the elements of a well integrated industrial complex still linger in the well-preserved row houses, the massive mill, and the crooked street patterned on the route of the power canal.

Bean, William. The City of Cohoes, Its Past and Present History and Future Prospects, Its Great Manufactories. The Cataract Book and Job Printing Office, Cohoes: 1873.

Masten, Arthur Haynesworth. The History of Cohoes, N.Y. From its Earliest to the Present Time. Joel Munsell, Albany, 1877.