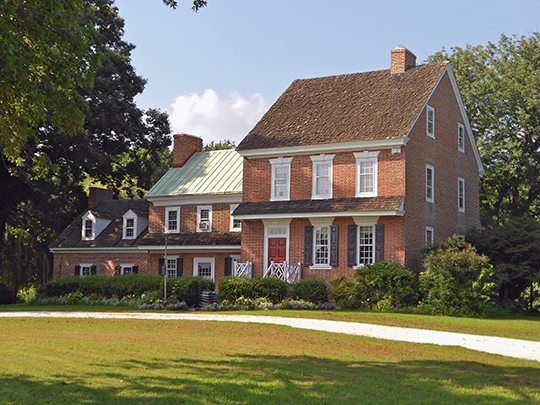 In 1675, just 7 years before William Penn came to the opposite shore of the Delaware River, John Fenwick and a group of English Quakers settled the region and founded the city of New Salem, the first permanent, English-speaking settlement on the Delaware. Previous settlements had been made by both the Dutch and the Swedes, many of whom subsequently moved father inland.

The settlers who came with Fenwick were imbued with ideals of religious freedom and self-government. Others of like mind were soon attracted. Within two years the land had been bought from the Indians and divided into lots. By Royal Commission in 1682 the city of New Salem became a port of entry for vessels. Trade and industry prospered in the 100 years before the Revolution and new towns sprang up about the original village.

The early Quaker settlement was swathed in litigation. For the sum of 1,000 pounds, the undivided half of New Jersey, later known as West Jersey, was conveyed to Fenwick by Lord Berkeley, who had received it as a grant from the Duke of York. Later, in a trial umpired by William Penn, Fenwick lost title to nine-tenths of the property on the ground that it had been purchased with funds advanced by Edward Byllynge. On the remaining one-tenth, which included the site of Salem, Fenwick had given a mortgage. The mortgagees and William Penn deprived Fenwick of his title to this land, too. The fact that Fenwick had been a major in Cromwell's army may have had something to do with his frequent troubles with Royal favorites.

The settlement was on the whole law-abiding, but the spirit of Quaker friendliness was not all-pervasive. The court record is illuminating:

Early records name Thomas Lutherland as the only known Salemite tested by the medieval Ordeal of the Bier, by which a suspected murderer was judged guilty if the corpse flowed or spouted blood when the suspect's hand was extended toward the body. After a jury trial, Lutherland was hanged in Salem, February 23, 1691. More cruel was the execution of a Negro woman named Hager. She was burned at the stake in 1717 for the hatchet murder of her master, James Sherron, high sheriff. It was customary for the courtroom crowd to vote as to whether the death penalty should be invoked.

The American Revolution started Salem's decline as a river port. British was vessels in the Delaware River throttled shipping, while the British occupation of Philadelphia drew attention to that city's superior advantages as a deep-water port.

At the end of the century the soil turned sour after 150 years of unscientific planting, and many Salemites moved west. Zadock Street left Salem in 1803, founded Salem, Ohio, and then Salem, Indiana, a few years later. His son, Aaron, established Salem, Iowa. The parade ended at the Pacific Ocean with Salem, Oregon.

By 1840 the general appearance of Salem was "thriving and pleasant," according to the contemporary historians, Barber and Howe. The town had a bank, a market, 8 churches, 2 fire engines, 2 libraries, a newspaper printing office, 3 hotels, and about 250 homes.

During this period the office of high sheriff was still an important position. Salem County's sheriff was especially proud of his work in hanging Samuel T. Treadway, who had shot his estranged wife and was convicted in a much publicized trial. Shortly afterward the sheriff went to Philadelphia, it is said, and applied for a hotel room. The clerk informed him that all the rooms were taken whereupon the sheriff leaned over the desk and said: "I am the high sheriff of Salem County, I hung Treadway, and I want a room in this hotel."

"Sir, the clerk answered coolly, "if you were sheriff of hell and hung the devil it wouldn't make any difference to me. There are no rooms in this hotel."

The reputation of the Quakers as Abolitionists spread throughout the South by grapevine telegraph just before the Civil War, and many escaped Negro slaves made Salem a stop on the Underground Railroad.

Industry became more firmly established in 1863, when a railroad reached the city, which had lost its status as a village by incorporation in 1858. With industry came a steady increase in population.