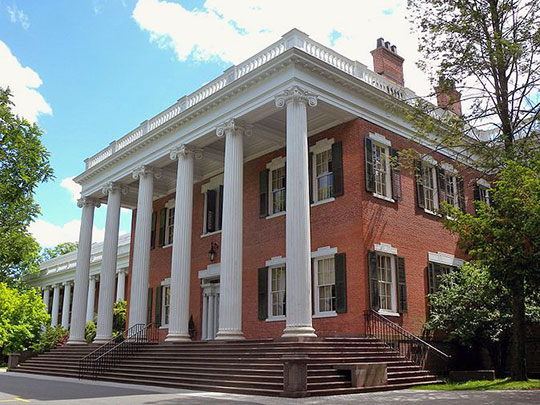 Madison, a solidly built, suburban town with a rich historical background, could pass for a New England village. It is enlivened by the presence of Drew University and Mrs. Marcellus Hartley Dodge. Madison's million-dollar municipal building, on the other side of the Lackawanna Railroad embankment, is the gift of Mrs. Dodge who is the former Geraldine Rockefeller, daughter of William Rockefeller and a niece of the late John D. Rockefeller. The building is a memorial to her son, Marcellus Harley Dodge; its interior is finished in colored marbles and its rest rooms for policemen and firemen rival those of exclusive clubs. Madison is known as the "Rose City" because of its many greenhouses. Before 1834 it went by the plainer name of Bottle Hill. Some residents contend that the name was Battle Hill since the town site is said to have been the scene of two Indian skirmishes; but historians agree that the town took its first name from the nearby tavern.

The Sayre House, Ridgedale Avenue, built ca. 1745, was "Mad Anthony" Wayne's headquarters while his army encamped in the Loantaka Valley.

On the western outskirts of town are the buildings of Dew University. In 1929 its theological seminary received a real estate endowment of $5-million from the $40-million fortune of Manhattan's Wendell sisters. The institution was founded by the Methodist Episcopal Church as a theological seminary in 1867, the centenary of American Methodism, on ground donated by Daniel Drew, a stock-market speculator.