Photo: Homes in the Pitman Grove Historic District, Gloucester County, NJ. The Historic District was listed on the National Register of Historic Places in 1977. Photographed by User:Smallbones (own work), 2010, [cc-by-1.0 (creativecommons.org/publicdomain/zero/1.0/deed.en)], via Wikimedia Commons, accessed September, 2016. 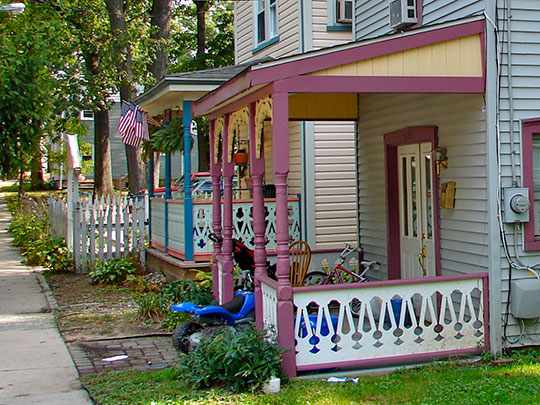 The Pitman Grove Historic District was listed on the National Register of Historic Places on 1977. Portions of the content of this web page were adapted from a copy of the original nomination document. [‡]

Pitman Grove is a good surviving planned community from the 19th century. It was also a camp meeting town, and represents a form of religious practice which was quite widespread in its time.

There were a number of such communities in New Jersey, including Ocean Grove, Island Heights, and Mount Taber, but these all had fairly ordinary plans based upon a grid. Of New Jersey's camp meeting towns, Pitman Grove's plan with its spoked wheel configuration is the most interesting and unusual.

Although the buildings lack individual distinction, their high pitched roofs, simple massing, and doll house scale give the Grove charm. In addition, the radial pathways set up vistas whose rhythmic progressions of gables are made more interesting by subtle variation in height. Moreover, Pitman is a surviving 19th Century environment, complete with most of the styles which were popular from 1870 to 1900. It demonstrates the ways in which these styles were burlesqued to produce picturesque effects on ordinary buildings.

In the 19th Century camp meetings constituted the frontiersman's sabbath. This was the cultural base of early Methodism. With improved transportation and urbanization the church changed. The camp meetings enjoyed a resurgence after the Civil War. This resulted from renewed interest generated by the Centenary of Methodism in America, in 1866. The centenary camp, at nearby Barnsboro, employed a circular plan with radiating streets lined with tents. By the summer of 1869 the camp meeting attracted thousands of visitors. But the camp could not be expanded owing to adjacent marlpits, whose mining possibilities precluded any other use. In June of 1871 a group, which included a number of officials of the Centenary camp, formed the New Jersey Conference Camp Meeting Association, which had authority to adopt ordinances governing people within the bounds of the area. Shares were sold to raise money. Seventy acres were purchased near the Railroad line in the present location of Pitman. At this time, a close relationship was established with the Ocean Grove Camp Meeting Association. Dr. A. E. Ballard was an officer in both groups. It was felt that a rural resort like Pitman, would be an excellent complement to a seaside resort like Ocean Grove. The association decided to name the new camp meeting after Reverend Charles Pitman (1796-1854) whose religious oratory was renown in his time. Pitman was a native of New Jersey who spoke at many camp meetings during the first half of the 19th Century.

At the Association Meeting in April 1871 "Brother Perry stated that the plan for the camp ground was in the process of preparation by Mr. Sloan, an architect of Philadelphia, but was not ready for submission." There is speculation that this referred to Samuel Sloan, a prominent architect, writer and editor of Architectural Review. It is not known if Sloan's plan was adopted but if it was, the execution was inept. This is suggested by the fact that the disposition of the radial pathways is irregular, and the fact that the auditorium is not quite central. This result can also be explained by the theory that Pitman's plan was taken from the plan of the Centenary Campground.

Concessions were sold to merchants for the privilege of selling provisions and services to campers. This resulted in a number of squabbles between local farmers and those who had purchased concession rights. Another perennial problem was the proper observance of the sabbath. The railroad had made an agreement with the Directors of the Camp Meeting not to stop at Pitman on Sundays, during camp meetings. This caused considerable inconvenience for the growing number of permanent residents. This resulted in periodic friction between the Camp Meeting Association and local residents.

The appeal of the Camp Meeting was twofold. For the city residents, the rural camp meeting helped to stave off the summer "back sliding" away from religion. For the farmers the camp meeting offered a social and exciting experience which was in sharp contrast to their somewhat boring lives.

Amenities began to appear at Pitman. During the Camp Meeting of 1878 a visitor noted, "no longer were there white tents among the brush wood trees," furnished with haunches for seats and straw for beds." Instead there were graveled walks, a large store, 4 restaurants, a barbers shop, an ice cream saloon and about 300 cottages. Two weeks prior to the opening of the camp meeting strings of wagons delivered supplies, six trains per day arrived, and the cottages filled up. Services were held continuously from 5 a.m. to 10 p.m.