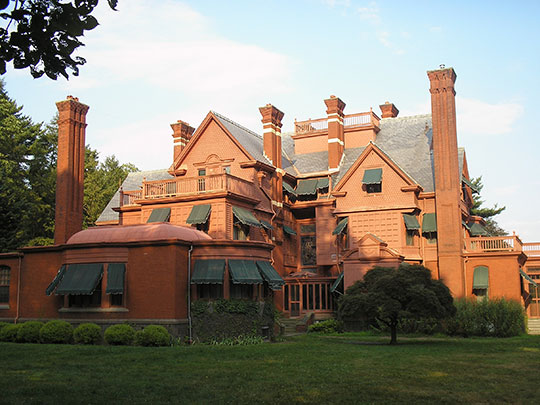 The town of West Orange was established on March 11, 1862 and named West Orange in 1863. There are two mountain ranges which run through the township like spines, both running from northeast to southwest, parallel to each other. The main road which ran through the valley was appropriately named Valley Road, now partly renamed Main Street.

Shoe making long remained a prominent industry in the area. This, however, was overshadowed in the 1840s by numerous hat manufacturers and by the late nineteenth century, West Orange had become one of the "leading hatting centers of the country." As many as thirty-five firms and two-thousand workers relied on this industry at its peak. These industries known as "Valley shops," forced the construction of rows of small houses on White and Beaver Streets and became the primary force in the early growth of the city.

By the time of Edison's arrival in 1887, an industrial center was extant along Valley Road, served by railroads of the Morris and Essex line which ran parallel to the roadway. But Edison established his laboratories and factories farther east than along Valley Road, in a part of town that had consisted mostly of grand estates.

At its peak, in the 1910s and 1920s, the Edison Corporation complex consisted of dozens of structures for manufacturing and administration. Edison's operations at his labs and factories promoted the sudden growth of the city of West Orange at the turn of the century. Workers' housing was constructed by developers outside Edison's organization to accommodate the new work force. New housing, along with churches, stores, and trolley lines sprang to life in West Orange in response to the growth of the Edison industrial empire. It was recorded in 1937, after Edison's death, that, "One of the primary reasons behind the extension of the car line into West Orange was the growth of the Edison industries."

The development of Edison's industrial complex beginning in 1887 and continuing until the 1920s dramatically transformed West Orange. With the large factory complex, Edison became the area's most prominent employer, hiring 3,000 in 1900 and 8,000 in 1914. By 1922, Edison's complex was quoted as "the largest establishment in the Oranges devoted to industrial pursuits." In 1937, the town of West Orange noted a seventeen-fold growth of its population in the seventy-five years since the town's founding in 1862.

The factories brought large-scale employment opportunities to the community and attracted recent immigrants to the area. Employees including laboratory workers in the nineteenth century were predominantly from northern Europe while in the twentieth century, the working hands became Mediterranean. Looking through the payrolls of the 1920s, the surnames of factory workers represent countries all over Europe, including Greece, Italy, Ireland, Germany, Poland, and England.