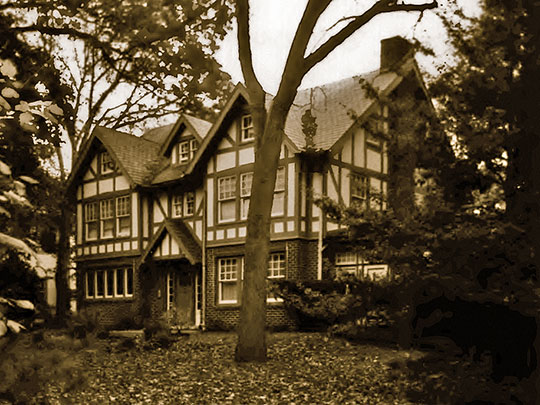 The Oaks Historic District was listed on the National Register of Historic Places in 1997. Portions of the content on this web page were adapted from a copy of the original nomination document. [‡] .

"The Oaks," located in Merchantville, New Jersey, is a planned neighborhood of upscale, early-twentieth century suburban houses envisioned by landscape architect George E. Rhedemeyer and developed by the Oaks Realty Company which he formed in 1910. Designed during the early years of the automobile age and for the most part, before the First World War, The Oaks became Merchantville's twentieth-century showcase and its gateway for vehicular traffic entering the Borough from Wellwood Avenue, later renamed Browning Road. The Oaks Historic District contains an assemblage of the period's revival styles, several representatives of which were designed by Arnold H. Moses, long-time Merchantville resident and the Borough's most prolific architect during the first quarter of the twentieth century. Because The Oaks contains a concentrated group of Merchantville's most fashionable residences associated with the automobile age of the Borough's developmental history, and the resources reflect the discrete plan laid out by Rhedemeyer and the architectural work of Moses, the district is eligible for the National Register of Historic Places. The period of significance begins with Rhedemeyer's acquisition of the land in 1909 and terminates around 1937 when the last of the initial homes in The Oaks was built.

Merchantville is a small borough of 395.8 acres inhabited by approximately 4,000 residents. Its history is a history of suburbanization, a phenomenon which began in nineteenth-century America just as soon as new forms of transportation created the opportunity to distance workplace from residence. At first, this opportunity largely was restricted to the more affluent class who may have used their suburban home as a summer residence. But starting in the third quarter of the nineteenth century, the ambitions of railroads, real estate speculators, developers, builders, and financial institutions made year-round suburban homes accessible to the middle class, while the values instilled by Victorian popular culture made them desirable. This was clearly the case in Merchantville.

The railroad put Merchantville on the map in the 1860s and 70s. Beginning in the late 1870s and continuing to the turn of the century, the first significant residential development took place just north of the railroad tracks that linked Merchantville to Camden and Philadelphia. This was the National Register-listed Cattell Tract [see Cattell Tract Historic District], which attracted many of Camden and Philadelphia's new industrial entrepreneurs. However, it was the automobile that triggered the largest residential and commercial development of the Borough. Roughly 50% of Merchantville's extant buildings were constructed between 1910 and the Second World War. Even before plans for the Delaware River Bridge in 1914 would accelerate real estate speculation and development in Camden County, Merchantville's west end — accessed by roadways — started to undergo subdivision and construction. One of the visionaries and investors behind this new chapter in Merchantville's history was George E. Rhedemeyer.

George E. Rhedemeyer (1860-1917) may be best known in Merchantville for The Oaks, but in Camden, he is most famous for shaping the landscape of Harleigh Cemetery. Educated in Orange, New Jersey, Rhedemeyer learned about landscape gardening from a family friend in Brooklyn. Much of his early experience was acquired in Ohio, where he was in charge of the grounds at the state insane asylum at Athens. Rhedemeyer moved to Camden around 1892 and became Harleigh Cemetery's second superintendent. In this position he was credited with establishing the cemetery's conservatory and significantly improving the landscape. During the early 1900s, he and three partners acquired ownership of the Meadow Land and Improvement Company which held an extension of land to Harleigh Cemetery. In exchange for the land, the owners received half the income from the sale of burial lots. Presumably, the proceeds from his stock shares enabled Rhedemeyer to purchase 38 acres in Merchantville near Wellwood Avenue (now Browning Road) and Maple Avenue in July, 1909 for $12,250.

Rhedemeyer acquired his undeveloped wooded land from Arthur Dorrance. Previously, the land had belonged to the Estate of Dan Cooper and before that, the Estate of Sarah Fisher. Rhedemeyer filed his initial subdivision plan for The Oaks in September 1909. He carved out Volan Street and Oak Terrace, and laid out thirteen irregularly sized and shaped lots, some of which subsequently were merged or reconfigured. He held the large Maple Avenue parcel for himself and sold the others under the rubric of the Oaks Realty Company, which he incorporated with Camden attorney William Clayton Jones on November 19, 1910. The lots, of various sizes, sold from approximately $1,500 to $3,500. Deed restrictions abounded, including minimum dwelling costs ranging from $4,000 to $6,500, depending upon location, and setback requirements for the houses and outbuildings. The deed also prohibited a long list of uses including a hotel, drinking saloon, blacksmith, carpenter, wheelwright, steam mill, tannery, slaughter house, skin dressing establishment, livery, stable, and glue, soap or starch manufactory, and reserved the Oaks Realty Company the right to tear down any buildings in violation of the deed. In 1916 Rhedemeyer amended his subdivision to include the south side of Volan Street — forming the 8.1 acres of The Oaks Historic District — although the Oaks Realty Company had already begun to sell off those parcels in 1911. Beginning in 1916, Rhedemeyer sold off the balance of his initial 38-acre purchase, which ultimately was subdivided into smaller lots.

Most of the properties were sold during the 1910s to residents of Merchantville, West Collingswood, Camden, and Philadelphia. Just as Maple Avenue and the Cattell Tract had been the Victorian enclave for the upper middle class — primarily industrialists — so, too, did The Oaks become the fashionable address for Merchantville's automobile age denizens. In addition to Rhedemeyer, the first generation of Oaks residents included the secretary of the Oaks Realty Company, a civil engineer, a worsted yarn manufacturer, a wholesale grocery merchant, a produce broker, and a bookkeeper. By 1920 a lumber merchant, a soap manufacturer, and the President of the Stove and Range Company resided in The Oaks.

The first house to be built in The Oaks was Rhedemeyer's Italian Renaissance Revival-style mansion at 320 West Maple Avenue, completed in 1910. Two others built by 1911 were 111 Browning (since demolished and rebuilt as 101 Browning Road), a gambreled sub-type of the Shingle Style, and 121 Browning, a Neoclassical residence. Others were soon to follow, introducing the Tudor and Colonial Revivals to the neighborhood. As a group, they form a nucleus of fashionable upper middle class architecture, the only such twentieth-century concentration in the Borough. By their size, scale, and level of architectural sophistication, they stand apart from the other period housing in Merchantville, which is primarily comprised of 1910s and '20s modestly-scaled, builder-designed or pattern book Craftsman, Colonial Revival, and Dutch Colonial Revival homes.

Of the twelve contributing resources in The Oaks Historic District, three (129 and 131 Browning Road and 310 Volan Street) are documented to have been the designs of the English-born architect Arnold H. Moses (1862-1934), who resided in Merchantville throughout his career. Moses received his architectural training in the office of T.P. Chandler and subsequently opened an office in Philadelphia with partner Guy King. One of Moses' first important commissions was the addition of a Senate Wing to the New Jersey State Capitol at Trenton, completed in 1904. While Moses was to develop a substantial statewide and Philadelphia-area clientele, it was in his hometown that he most clearly shaped the architectural streetscape. Moses executed more commissions in Merchantville than any other architect. This role is understandable considering his prominent role in community affairs. Not only was he the son of Reverend Richard George Moses, Rector of Merchantville's Episcopal Church, but also, he was a leader in church activities himself. This association likely introduced him to several clients as did the positions he held early on in his career as Councilman, Plumbing Inspector, and a Director of the Merchantville Building and Loan Association. During the late 1880s, Moses and King were designing frame cottages in the National Register-listed Cattell Tract, the initial Victorian residential enclave in Merchantville. The partnership between Moses and King was dissolved in 1890 for a partnership among Moses, King, and engineer George F. Ferris that lasted until 1892. Moses had well-established his independent practice by the time he executed his first of several documented commissions for The Oaks in 1912. In addition to his prolific career as a residential designer in Merchantville, Moses was also responsible for most of the Borough's major civic and commercial architecture. These works included an electric light plant (1889), a clubhouse for the Merchantville Country Club (1917), First National Bank (1921), Merchantville High School (1926), and Borough Hall (1928).

Another architect credited with a commission in The Oaks Historic District is Charles R. Peddle, who designed the Colonial Revival-style residence at 2 Oak Terrace. Educated at the Pennsylvania Museum and School of Industrial Art, Peddle opened a practice in his residence in Woodbury, New Jersey, in 1897, and subsequently a second office in Philadelphia. Nearly all his work was executed for South Jersey clients and consisted of residential, commercial, and civic buildings.

In summary, The Oaks Historic District stands out as a well-preserved, stylish residential enclave within a suburban landscape laid out by developer and landscape architect George E. Rhedemeyer. As a group, the houses reflect a distinct era in Merchantville's history of suburbanization and document a range of early-20th-century domestic architecture, while individually, several of the resources illustrate the work of Arnold H. Moses, the Borough's singularly most influential architect.