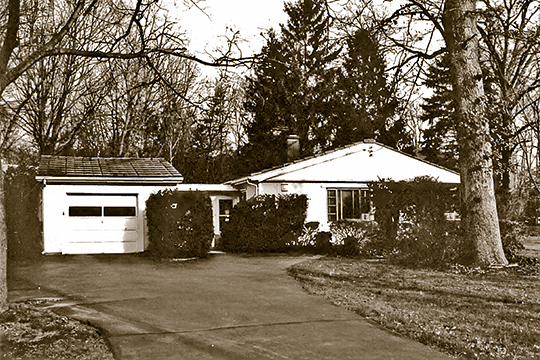 The Harold Hess Lustron House was listed on the National Register of Historic Places in 2000. Portions of the content on this web page were adapted from a copy of the original nomination document. [‡]

The Harold Hess House was built in 1950 and is located at 421 Dune Avenue, Closter, Bergen County, New Jersey. It is an example of the two-bedroom Westchester Deluxe model with attached breezeway connecting to a one car garage. The house which measures 1,085 square feet, 31' x 35', is constructed entirely of prefabricated porcelain enameled steel. The structural steel panels rest on a concrete slab foundation. The rectangular yellow enameled steel house with dark gray tile roof was one of 2,498 manufactured and sold in the United States by the Lustron Corporation between 1948 and 1950. The house is located in a suburban residential neighborhood and the property retains a high degree of historic integrity and is in excellent condition.

The Westchester Deluxe model was the most popular of all Lustrons manufactured and this is a good example of the most common two-bedroom type. The two-bedroom Westchester is distinguishable from all other Lustrons by the 6' x 12' cutout located on the gable front projection for a washcloth in the shower, swiveling tooth-brush holder, and built-in tissue holder. All that was needed from the owner was a refrigerator, stove and furniture.

The interior doors are enameled steel, sliding pocket doors, which continues the streamline appearance and decreases the need for the space a swing door requires. The original floor covering was resilient asphalt tiles and these have been replaced in the Hess house by linoleum and a new asphalt tile floor in the kitchen. Because of the durability of the enameled steel, the majority of the original features have been retained in the Hess House. The most significant alteration has been the application of yellow paint to the exterior panels and a light coat of black spray paint to the roof tiles. However, just as the porcelain-enameled panels were intended to shed dirt they are now causing the paint to peel. Almost all the applied paint will soon disappear with no harm to the enamel coated original panels. All of the original gutters and down spouts have been replaced.

The house is a one-story, side gabled, ranch type erected on a concrete slab. The exterior of the house contains very little ornamentation. However, the exterior porcelain-enameled yellow steel panels, which measure 2' x 2', the brown enamel tile roof, enameled steel chimney panels, living room bay window and decorative spiral porch roof support in the cutout, give this house its distinct appearance. Gable ends have 1' wide panels placed vertically. All windows have their original aluminum sashes and have been retained. They are operated by small crank windows. All enamel window surrounds and curved lintels are extant. There are two original gray doors with glass inserts, and original locks. The original entrance porch lamp also remains.

The present front facade faces southwest and features a picture window in the dining room and the inset entrance cutout. This door which was traditionally the main entrance to the living room is not used and the primary entrance is through the intended rear door through the breezeway and utility area on the northwest side of the house. Generally Lustron site suggestion plans show what is the southeast side in the Hess facade as the main side facing the street.

The side or northwest (traditional rear) facade features one window in the second bedroom and two, smaller, symmetrically-placed aluminum windows for the bathroom and kitchen, flanking the door. This side has the breezeway attachment to the garage and this is used as the primary entrance. The interior is also covered with porcelain enameled steel panels measuring 2' x 8'. The panels are vertically scored to give a paneled appearance. The kitchen and bathroom panels are yellow and all other wall panels are a light gray. Ceiling panels throughout measure 4' x 4' and are white. Panels in the kitchen, utility room, and bathroom are yellow and measure two-feet square. All cabinets in the kitchen, bedroom and bathroom are light gray.

The two bedrooms and bathroom have their original steel porcelain-enameled flush gray pocket doors which slide and roll on overhead tracks. All closet and storage doors are of the bypass sliding type. All doors and cabinet hardware throughout the house is original. The bathroom retains the original stamped steel bathtub measuring 5-1/2' built-in three drawer counter, mirror and light fixtures, soap dish and other fixtures. The sink and vanity have been replaced and shower doors installed. All of the kitchen cabinets and hardware are original. Only the original dishwasher-clothes washer was removed. The kitchen sink which was attached to this machine was likewise removed. The original gas Tappan range from 1950 still functions.

In the utility room the original Lustron hooks for drying laundry are still in place. The most often changed item in a Lustron house is the heating system and it has been replaced in the Hess House with a gas burner which connects to the old radiant heating system. The original system consisted of a small generator and furnace supplying radiant heat through duct work contained in the attic space located directly above the ceiling panels and through a plenum chamber radiates the heat into the interior of the house after heating the ceiling panels. The wall identification tag or builder's plate (similar to auto serial number plates) is extant but presently obscured behind new cabinets attached to the utility room wall above the washer and dryer units.

The Hess house is sited diagonally on a corner lot with main facade facing the intersection of Legion Place and Durie Avenue. The main facade is in line with the breezeway and garage. Also because the rear of the house is now the side the breezeway and garage are also on the side. The standard planning guide always recommended placing the garage at the rear of the house.

An aluminum storage shed is located on the north side of the property line at the rear of the house and is painted yellow. This structure is non-contributing. The lot size is two thirds of an acre and the property is very threatened as a subdividable lot. The Hess House is located in close proximity to the Closter Historic District, a pre-automobile late nineteenth and early twentieth century railroad suburb of New York City. The Harold Hess House is an excellent example of the Westchester Deluxe model which was manufactured by the Lustron Corporation and built in 1950. It is significant under criteria A as a representation of the mass production of post-World War II housing. It is also significant under criterion C as an example of a new construction method for residential housing with its entirely enameled steel frame and body as well as its modern design and Ranch-type open layout. In its day the Lustron house was touted as the most technologically advanced answer to the housing shortage after World War II.

According to Lustron Corporation sales records only sixteen houses were sold in New Jersey and all of these were probably the Westchester Deluxe models. Only 11 of these have been identified to date in the State and three are known from Bergen County. In 1998 the Lustron at 22 Division Street in Closter was demolished and only the Hess House at 421 Durie Avenue in Closter and the Hiorth House located at 19 Dubois Avenue in Alpine, Bergen County, remain. Both of the Bergen County Lustrons were purchased from the North Jersey Better Living Homes Company in Maplewood. This Lustron franchise was owned by Arthur Padula, a Newark builder, and it was the first and most important dealership in New Jersey.

The Harold Hess House retains almost all of its original historic fabric and it is an excellent example of the Westchester Deluxe model. Features such as the front bay window, easy-care enameled steel panels, spacesaving shelves/bedroom vanity are some of the many architectural features used to create a comfortable, spacesaving and modern home.

In 1949, Mr. Harold Hess, a returning World War II veteran and recently married, saw the Palisades Amusement Park model of the Lustron. In 1950 he purchased the "Westchester Deluxe" model with attached breezeway and one-car garage from Art Padula, owner of the Better Living Homes Lustron franchise in Maplewood, New Jersey. Originally he wanted the three bedroom, two-car garage models but felt fortunate to receive what he got, since the company was already headed into bankruptcy.

Mr. Hess, with Lustron engineer Jim Mortimer, faced 6 months (between the fall to spring of 1949-50) of endless planning and zoning board meetings in Fort Lee. They failed to obtain a permit and Hess turned to the northern sections of Bergen County which were less developed and relaxed building codes provided opportunities to build the novel construction of the all-metal, prefabricated house. Hess never lost faith and is still the proud owner in the year 2000. Having raised his family here he remains quite pleased with the house. Only noting that there were some adjustments, such as finding people with enough problem solving creativity to make repairs to a steel house. Other minor matters such as hanging family portraits with industrial magnets and interior spring cleaning with automobile wax were more easily solved.