Photo: House on East Drive in the Marven Gardens Historic District. The District was listed on the National Register of Historic Places in 1990. Photographed by User:Smallbones (own work), 2011, [cc-by-1.0 (creativecommons.org/publicdomain/zero/1.0/deed.en)], via Wikimedia Commons, accessed April, 2013. 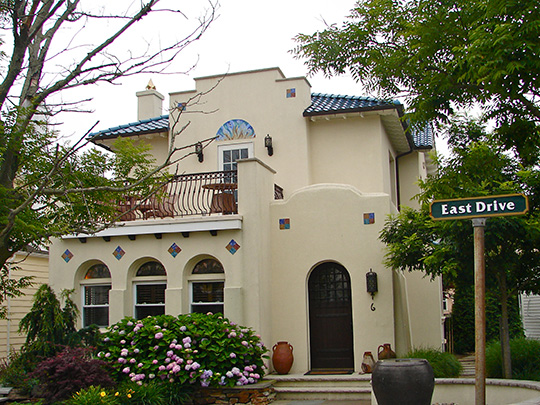 The Marven Gardens Historic District was listed on the National Register of Historic Places in 1990. Portions of the content on this web page were adapted from a copy of the original nomination document. [‡] .

Marven Gardens Historic District (also known as Winchester Gardens) is significant as a well-preserved example of a planned early twentieth century affluent development situated within what was then one of America's important seaside resort areas. It was purposely developed to attract the affluent resident and its individual dwellings were designed to represent most of the current architectural styles of the times. Marven Gardens is also significant due to its inclusion within the board game of Monopoly and its recognition throughout America.

The development of the town of Margate, of which Marven Gardens is a part, dates to 1854 with the opening of the Camden and Atlantic Railroad. The railroad afforded quick transportation to the Jersey shore for Philadelphia residents. Soon, developers began to construct planned seasonal subdivisions in Atlantic City and the developing communities to the south.

This period, in the latter half of the nineteenth century, was marked by a new consciousness of living with nature. It was also the period during which the "second home" movement became widespread in the United States (Lancaster; 1985). In mid century, vacationing Americans started to drift away from the cities and inland settlements to the Eastern Seashore. Early visitors to the seashore stayed at inns, but beginning in the 1870s, vacationers began renting, buying or building seashore vacation homes. In response to the demand, developers began to construct planned seasonal communities popularly known as "Cottage Cities" along the Atlantic Seashore (Lancaster 1985). Such a development, Easton's Point, at Middletown, Rhode Island was laid out by Frederick Law Olmsted. Perhaps the best known of these is Oak Bluffs on Martha's Vineyard, and one of the most ambitious, though unsuccessful, was at the west end of Nantucket. There, 1,800 Great Neck and Smith's Point lots were made accessible by curving drives following the outlines of coves, ponds and other features.

By 1885, Margate, a typical seaside community known before 1910 as South Atlantic City, became a separate community. Its population increased rapidly during the early twentieth century, from 129 in 1910 to 2,913 in 1930. It was during the early growing years of Margate that developers were drawn to the attractiveness of its seashore location. As in other seasonal communities south of Atlantic City, planned vacation (second home) subdivisions were laid out. One of these subdivisions was Marven Gardens, a charming seashore development with a collection of attractive and spacious dwellings which emulate a variety of Period houses.

The developers of Marven Gardens drew from the principles of Frederick Law Olmsted, which rebelled against the "tyranny of the gridiron street pattern" (Kramer et al. 1988). Olmsted's plans for subdivisions introduced a new respect for the natural contours of the land. The plans for the Marven Gardens subdivision reflected this late nineteenth century respect for the natural contours of the land, but ushered in the early twentieth century trend of aesthetic perspective, which introduced curvilinear streets and molded intersections into subdivision design, regardless of the topography.

The name for this development was created by taking the MAR from the town of Margate where it is located and adding the VEN from Ventnor Avenue which forms the southern border of the development, thus deriving the spelling "Marven" Gardens. The development has also been known as Winchester Gardens for the street forming its northern boundary. Pedrick planned a similar subdivision "Ventnor Gardens" in the western portion of Ventnor, but during the depression he lost his money and the land (Smith 1963). The model for Marven Gardens, if such existed, would have been Kew Gardens in Long Island, then a well designed and maintained affluent development. There, as in Marven Gardens, the emphasis was on targeting a specific economic status group.

Marven Gardens was built by local builder, Frank J. Pedrick and Sons. Members of the Pedrick family for a time actually lived in Marven Gardens. Frank J. Pedrick was a native of Salem County, New Jersey, who for over forty years was a successful, and socially-conscious, residential builder and developer in the coastal region. He was formerly associated with the construction of the Million Dollar Pier of Atlantic City. The firm was, at the time that they undertook the development of Marven Gardens, the leading developer along the New Jersey coast. Frank J. Pedrick & Sons provided services from design to building to financing of owner occupied residences. Marven Gardens was from its onset an affluent development of white collar and professional residents. The Polk Directory listed the occupation of 59 residents, which included 7 corporate presidents, 9 business managers, 10 salesmen, 3 lawyers, 3 real estate agents, and 3 doctors (Polk & Co. 1941). The development continued to attract the same types of residents, but by 1961 this was an aging group. Of the 121 individual residences, fifty of the residents were either retired, or listed as widowed. Of the remaining 69 that listed an occupation, there were 14 corporate presidents or business owners, 10 business managers, 3 salesmen, 3 lawyers, 2 real estate agents, and 5 doctors (Polk & Co. 1961).

This trend toward a retirement residential area has continued to the present. Of the 121 residences in 1982, 33 listed their position as retired. Of the remaining persons, the population is equally divided between white collar workers, blue collar workers, and summer houses. Many of the new residents work at the casinos. Nineteen of the houses are recorded as summer residences only (Polk & Co. 1982).

This affluent coastal enclave retains the distinctive characteristics of an early twentieth century planned development. Marven Gardens consists of an internally-structured block of ornamental open spaces and residential structures, a simple oval within a rectangular space equal to several traditional city blocks. This plan reflects the perception of the developer of the tenets of Frederick Law Olmsted, who advocated varied pleasant suburban landscapes. The developers of Marven Gardens succeeded in creating a pleasant landscaped area within, but distant from, the congested main streets of the seashore city of Margate. The character of this development has survived and Marven Gardens still appears very much as it did when first developed. There are no incompatible intrusions into the Marven Gardens Historic District.

Marven Gardens was recognized in the Parker Brothers game of "Monopoly" as "Marvin Gardens," part of the third most expensive real estate group on the board. Its association with the board game of Monopoly has placed it, in the minds of a majority of Americans, in the position of America's preeminent affluent seaside resort area. Although its name was misspelled, and in spite of the fact that unlike other properties on the board, Marven Gardens was not even in Atlantic City (it was customary in early forms of the board game to give properties the names of streets and places that existed within the city in which it was being played); once the game became mass-produced, Marven Gardens' reputation was set.

Although there are numerous individual houses similar in styles surviving in Margate and other North Atlantic County seashore towns, Marven Gardens, as a planned suburban entity, is one of a few intact residential seashore developments of the early twentieth century with this unique plan. Marven Gardens reflects the introduction of the aesthetic trend of subdivision design which became a standard element of subdivision design in the second half of the century. This unique subdivision is a significant element of the social and cultural heritage of the community of Margate.