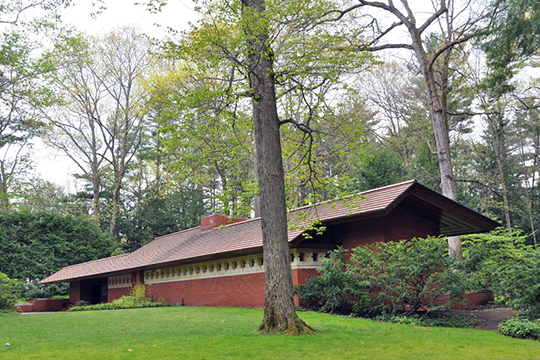 The Zimmerman House was listed on the National Register of Historic Places in 1979. Text below was adapted from a copy of the original nomination document. [‡]

The Zimmerman House (223 Heather Street), designed by Frank Lloyd Wright in 1951 for Isadore & Lucille Zimmerman, is a superb example of refined "prairie style" architecture. Its one level sits on a "floating" concrete slab and is organized around a massive center L-shaped chimney. The tee roof plan shelters the two bedroom house and a two-car carport under a long low "floating" gable roof with deep overhangs.

Interior surfaces, mostly of Cypress, are as originally installed. The concrete floor finish is unaltered; built in furnishings, fabrics and detailing are original.

Maintenance has included the introduction of a hot air heating system through the northerly half of the building. This was required because of failure of the original forced hot water radiant system below the concrete slab floor finish.

Site condition has been maintained on a conscientious basis. Plantings and configuration including the mail box conform to original designs by Frank Lloyd Wright.

The Zimmerman House is one of the few examples of Frank Lloyd Wright's "Prairie Style" architecture in the Northeast, it is significant as a refined, mature prairie style building that clearly demonstrates most all of Wright's Prairie Style theories in a very small house, i ,e, "floating" concrete slab construction, low "floating" roof, undulation and sequence of space, continuum of interior and exterior space, it is significant for the excellence of its detailing and the craftsmanship of its execution, it is significant (at the time of the document, 1979) for it is occupied by its original owner and has been meticulously maintained in its original condition.

The house was acquired by Manchester's Currier Museum of Art in 1988. Tours of the home can be arranged through the museum. While the nomination document classifies the house as "Prairie Style," the museum refers to it as Usonian. [‡]