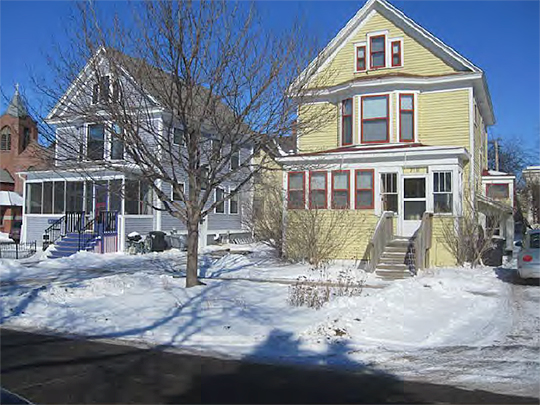 The M. E. Beebe Historic District was listed on the National Register of Historic Places in 2015. Portions of the content of this web page were adapted from a copy of the original nomination document. [‡]

Six buildings occupy what had been three standard urban residential lots (each 50 feet by 140 feet) at the edge of the Fargo Central Business District and date from about 1881 until 1906. Three date from the earliest period; three others from the years 1903-1906. Two have been moved within the district and renovated to match the later buildings. With one exception, the buildings are now consistently Classical Revival in style and of similar size and footprint. Balloon frame construction has been employed throughout. Narrow weatherboard siding is the predominant exterior material; one has been stuccoed circa 1910. All have columned front porches that were originally open, though three are now enclosed. Four of the principal roofs are gabled; one is hipped and another is flat with a parapet. Taken as a group, the six buildings constitute a cohesive and well-preserved expression of Fargo residential architecture during the Second Dakota Boom.

The M. E. Beebe Historic District acknowledges the importance of late-19th century architect Milton Earl Beebe [1840-1922] to the architectural heritage of Fargo and many other communities in North Dakota and Minnesota during a dozen-year career in the region. Resident in Fargo from about 1900 until about 1911, Beebe lived within the district after 1903, designing four and renovating two of its six contributing structures. After 1906 his architectural office was located in one of these buildings.

The district is located immediately west of the Fargo Central Business District at the northeast corner of Third Avenue North and North Eighth Street, specifically what were Lots 10, 11 and 12 of Block 10 of Roberts Second Addition to the City of Fargo. Beebe acquired two of these lots (numbers 11 and 12) in October 1903 and the third (Lot 10) in December of that year. Two of them were occupied by preexisting single-family residences; it is possible that the third also contained a modest dwelling. The boundaries of the district are simple to define and defend—through his ownership of the properties— and yet complex, through the addition of three new buildings beyond those already extant and the eventual subdivision of the three standard 50-foot by 140-foot Fargo residential lots into a more complex interlocking pattern of individual ownership following the Beebes' departure from Fargo for their retirement home in California.

The M. E. Beebe Historic District consists of six contributing buildings, all of which were owned by architect Milton Earl Beebe and his wife Rose Josephine (Curran) Beebe. Beebe remodeled at least one of these (extensively) and designed four others. He occupied three of them, two as personal residences (sequentially) and one as an architectural office and place of business. From this base of operations, Beebe executed at least half of his productive output during his North Dakota years, currently more than one hundred identified buildings. The buildings themselves—modest as individual structures, but stronger as a group—also represent themes Beebe exploited for his work throughout the region.

At least a few observations can be made about the quantity and quality of M. E. Beebe's architectural production during his twelve-year career in North Dakota. Working as a sole practitioner—without either partners or known draughtsmen as associates or assistants—Beebe produced a remarkable body of work, with a full range of standard building types. His work in North Dakota and Minnesota compares favorably with major competitors in Fargo (Hancock Brothers, George and Walter; A. J. O'Shea; William C. Albrant) and architects in other market communities such as Grand Forks and Bismarck. During those years Beebe lived in the historic district and practiced for 6 years from the architectural office specifically designed to represent his professional face to the world.

The remarkable survival of this group—in an area experiencing considerable pressure for redevelopment—is popularly identified with Beebe as an important historic figure of regional significance through the design of these and many other buildings in Fargo, Moorhead and elsewhere in both North Dakota and Minnesota.