Photo: Home in the Boylan Heights Historic District, Raleigh, NC. The Historic District was listed on the National Register of Historic Places in 1985. Photographed by user:Aigrette (own work), 2011, [cc-by-3.0 (creativecommons.org/licenses/by/3.0)], via Wikimedia Commons, accessed August, 2017. 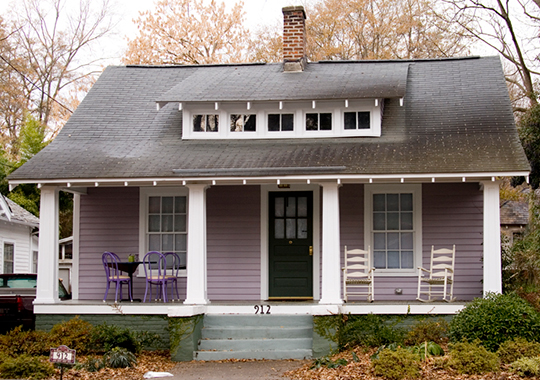 The Boylan Heights Historic District [‡] was listed on the National Register of Historic Places in 1985.

Purchased in 1907 by the Greater Raleigh Land Company and platted by the firm of Kelsey and Guild of Boston, Boylan Heights represents the second major documented attempt by the city's controlling interests to accommodate the rapidly growing white middle class of early 20th century Raleigh. Located on a beautiful, forested hillside site and provided with the amenities of water, sewer, sidewalks and a park, Boylan Heights attracted a variety of inhabitants. This is reflected in the architectural fabric which is predominantly large colonial, classical revival and picturesque bungalows with smaller bungalows and cottages on its periphery. With Glenwood and Cameron Park, Boylan Heights offers a great source of information and insight into this historically significant period of urbanization in Raleigh and the state.

In 1907, the heirs of William Montfort Boylan sold his mansion and its surrounding one hundred and eighty acres on the western outskirts of Raleigh to a land syndicate known as the Greater Raleigh Land Company for $48,000. The boundaries in the conveyance were the lines of the North Carolina Railroad on the north; the state prison lands on the west; the state asylum grounds on the south; and the city boundary on the east.[1] The syndicate developed one hundred acres for homes and sold the remaining eighty acres adjoining the state penitentiary to the State School for the Blind for $30,000.[2] The hilly landscape that the land company intended to plat into the Boylan Heights subdivision had a rich history.

Boylan Heights had been part of a plantation originally owned by Joel Lane, a local planter, who sold a tract of this land to the State of North Carolina in 1792 for the establishment of a permanent state capital. William Boylan, a successful publisher, planter and entrepreneur, purchased Lane's homeplace and land and resided in the original house until his death in 1861. His fortune enabled the Boylan family to live on the property in style which placed them among Raleigh's social elite throughout the nineteenth century. In 1858, Boylan's oldest son, William Montfort Boylan, built an impressive Italianate villa (National Register, Raleigh historic property) designed by the English architect, William Percival, on a hundred acre tract of property given to him by his father in 1855. The younger Boylan maintained his home and its lands until his death in 1899, but after his widow' a death in 1902, the heirs could not come to terms over the division of the estate, so the Boylan villa and land were sold to settle the dispute.[3]

The Greater Raleigh Land Company was representative of the companies of North Carolina realtors organized in the early 20th century to finance the purchase and the division of large tracts of suburban land. Frank K. Ellington (1870-1925) was president of the company and masterminded the acquisition and the division of several large family estates in Raleigh during his career. In fact, by 1910, Ellington was recognized as one of the state's leading authorities in the real estate business; he was a director of the Greater Raleigh Land Company, the Raleigh Real Estate and Trust Company, and the Suburban Auction Company.[4] Under his vigorous leadership, the Greater Raleigh Land Company quickly developed Boylan Heights, so that by 1915, Ellington's company had sold all of the lots and dissolved the syndicate. The Raleigh Real Estate and Trust Company had served as the parent corporation for the Boylan Heights venture, and it also created other major neighborhoods including Roanoke Park and acreage along Garner Road.[5]

Ellington's chief business associate in 1910 was J. Stanhope Wynne. He had met Wynne in Raleigh while working as a shoe clerk and subsequently joined him in the insurance business. Eventually, the two gentlemen became partners and, in 1899, established the Raleigh Real Estate and. Trust Company.[6] J. Stanhope Wynne (1849-1934) came from a large Raleigh family with influential connections, and as a patrician of the city, he devoted his life to its economic and physical expansion. In addition to his insurance and real estate concerns; he organized the first savings bank and built the first cotton mill. Wynne also involved himself in city politics and served as alderman for many years before he won the mayoral election in 1908 on the Reform ticket. He swept to victory upon a tide of public indignation evoked by a police scandal during the previous administration. After his election, Wynne immediately purged the city government and then began a crackdown on vice in the city, focusing on the operators of a notorious red light district in East Raleigh, who, through bribery, had gained virtual official authorization to run their brothels.[7] Ellington and Wynne were active and influential members of their community, and through business and social organizations such as the Chamber of Commerce, the Capital Club, the Kiwanis Club, and the Carolina Country Club, the men joined with other civic leaders to form a powerful social and economic elite who helped mold the residential and commercial fabric of the city.[8]

An example of their power was manifested in their carefully planned spatial and social composition of Boylan Heights. To create the ideal middle class suburb of 1907, the realtors incorporated restrictive covenants in the deeds of sale that assured the implementation of a plan for both the arrangement of homes and the social make-up of the neighborhood. First, building zones were created in the suburb by clauses in the deeds that placed a minimum value on construction costs, which was determined by the intended location of the house within the subdivision. The most expensive homes, at a value of at least $2,500, were built near the Boylan mansion on Boylan Avenue, the main thoroughfare of the neighborhood. Dwellings built on the secondary streets, such as Kinsey Street and Cutler Street were to cost at least $2,000, and the least expensive homes were built on the streets which made up the outer fringes of the subdivision like West Lenoir Street and West South Street.[9] Secondly, the deeds stipulated that Negroes were forbidden to own property or to live in the neighborhood unless employed as domestic help — thus assuring an all-white suburban development.[10]

The realtors' plans established a residential pattern which had a major effect upon the subdivision's early social development. White collar business men purchased lots along South Boylan Avenue with the wealthier families clustering around the Boylan mansion. During the early years of the neighborhood's existence, Dr. Zebulon M. Caviness lived at Montfort Hall; Frank M. Jolly, a jeweler, lived across the street from the mansion; Abraham I. Kaplan, a dairy operator, lived next door to the Caviness family; and down the block were the Guirkin, Mills, Woolcott, Lancaster and York families who were also prosperous, white collar, and self-employed. In contrast, the early inhabitants of Cutler Street were a mixture of modest income white collar and blue collar families represented by occupations such as painters, barbers, clerks, plumbers, and bookkeepers. The outer streets such as Boylan Avenue and South Street continued this trend of a diverse mixture of occupational titles among the inhabitants with salesmen, accountants, cashiers, carpenters, grocers, and tinners living on the outer fringe of the neighborhood.[11]

The planned pattern of growth established for Boylan Heights proved to be successful through the first decades of the subdivision's existence. In fact, enough young families lived in the neighborhood by 1926 to warrant the construction of a public elementary school. The Boylan Heights Improvement Association, comprised all the residents of the neighborhood, about two hundred families, sold Boylan Springs Park to the City for the purpose of establishing a school for their children.[12] The presence of so many young families pointed to a rosy future for the subdivision as long as conditions remained stable.

Several events shattered the plan Ellington and Wynne had successfully implemented for the neighborhood. The Great Depression caused many aspiring blue collar families to lose their homes and many of the white collar families had to sell out or divide their homes into apartments in order to hold onto their property.[13] As the economy began to recover in 1935, many of the white collar families moved to newer, more fashionable neighborhoods like Hayes Barton. An indication of the competitive pressure of Hayes Barton can be found in the City's decision to leave Boylan Heights out of a new school district created in 1929 when Needham Broughton High School was completed. The new high school added impetus to the exodus of white collar families because the high school was convenient to the new neighborhoods and many parents felt the new school would provide their children with better preparation for college work than the Hugh Morson High School in the inner city, to which the Boylan Heights children were assigned.[14]

Absentee landlords became prevalent during the 1940s, and, by 1948, the social composition of the community had become almost entirely blue collar. Even Boylan Avenue, which had been home for many of Raleigh's young businessmen, became a working class street. Montfort Hall, the grandest dwelling in the neighborhood, became an apartment soon after Rufus Coburn's death in 1948.[15] During the 1950s, Boylan Heights stabilized as an entirely working class neighborhood with many of the larger homes serving as apartments. By the end of the decade, the neighborhood once again began a decline because many of the surviving homeowners were widows or elderly couples and, as they died, the property stood vacant or was bought by rental agents. Vacant, ramshackled homes grown over with weeds dotted the subdivision and became a common sight in the neighborhood.[16]

Today, Boylan Heights has begun to experience an influx of young urban homesteaders who hope to revitalize the neighborhood. However, one nagging problem has yet to be resolved. The neighborhood has not fit into the spatial layout of the city since its inception and remains a residential pocket in the western district of the city. In part, this problem can be traced to William Montfort Boylan's refusal to allow any encroachment upon his part of his father's plantation, forcing the City Council to build its western streetcar lines around the property. In addition, the penitentiary and state asylum grounds on the west and south of the subdivision have formed constrictive boundaries which helped retard the integration of the neighborhood into the city's transportation system. The advent of motorized travel only increased the need for better communicative roads, and access to Boylan Heights has continued to be inadequate.[17] However, once the problem is solved, a varied collection of Bungalows and Colonial Revival dwellings, which dominate the landscape of Boylan Heights Historic District, might be adaptively restored to produce a vibrant urban housing development.

The historical significance of Boylan Heights Historic District can be summarized by three statements. First, the neighborhood is a fine example of an early 20th century suburb that remains essentially intact. Secondly, the architectural fabric of Boylan Heights reflects the tastes and values of the expanding middle class in the capital and as such is an important cultural artifact. Finally, as a case study of the larger phenomenon of the city's suburban development, it manifests both the business methods and the plans devised by civic and business leaders to influence the direction of the state's urban development.

Robinson, Charles M. A City Plan for Raleigh: Women' a Club of Raleigh, 1913.