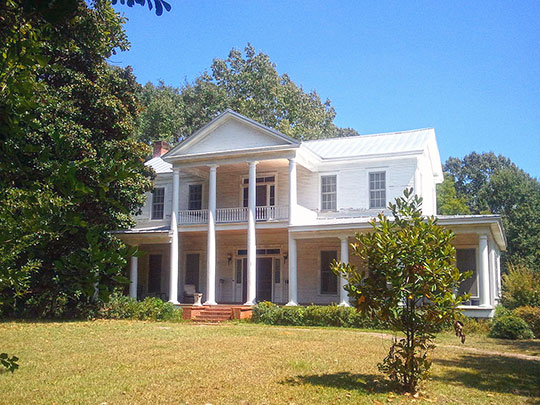 Brandon was established as the county seat when Rankin County was constituted by the legislature in 1828, although the town was not officially incorporated until 1831. Brandon was named for Gerard C. Brandon, the first native-born governor of Mississippi and who was in office at the time, signing the bill creating Rankin County. The site, even before it was incorporated as Brandon, was an important trading center because of its location on a spring near the intersection of two early territorial roads: one going north through Madison County, crossing the Natchez Trace and heading toward Cairo, Illinois and south to Mobile, Alabama; and the other road toward the Mississippi River to the west and east to Hillsboro, Scott County and on toward central Alabama. A campground developed at the spring (on present day South College Street), soon followed by a blacksmith and repair shop to meet the needs of the travelers. Stores and houses were built in the same area and by 1828 there was a settlement which was designated as the seat of the new county.

Brandon originally consisted of a forty acre tract donated by Daniel Fore and his wife. Fore was one of Brandon's earliest entrepreneurs, operating a grist mill and a ten-pin alley with a license to retail liquor. The tract which he gave to the county apparently had no buildings on it at the time of the transaction. The land was a square, 1320 feet on each side. It was divided into four quarters and each quarter divided into lots.

Rankin County's first courthouse was built in the center of the Brandon Square in 1833. The two story log building was demolished when it became too small for its purpose and needed repairs. The county records were moved to the Brandon Bank located on the southwest corner of the square. The bank burned in 1851, and a residence on College Street served as the courthouse until a new courthouse, to be built west of the public wells, was completed in 1853. This location was opposed by several citizens, and another location (lots 3,4,6,8, and 10 in the northeast quarter of the town) was selected. The new building was a Greek Revival, two story temple form building with a three bay, distyle-in-antis facade and pedimented portico, topped with a domed cupola.

Because Brandon was the county seat and an important trade center, several hotels and taverns were built to accommodate the many people who came there to transact business. One of the earliest of these was the Union Hotel, built in 1836 in the southwest quarter of the town. The Chester House, originally called the Shelton House, was built in 1838 and located on the corner of Main and Timber Streets. It was a two and a half story building with galleries on the first and second floor. Contemporary with these hotels were several saloons, including the Gem Saloon, housed in a two story frame building on the south side of the public square, and the "Old Tavern," in operation by 1842.

By 1837, Brandon had a variety of commercial activities, including three dry goods stores, a lumber company, and a grocer/provisioner, in addition to Fore's grist mill and two smithies. By 1842, eight merchants were listed in Brandon, and more stores opened in 1844 and 1845. Brandon was also the county's major medical center and had at least four doctors by 1837.

The legislature in 1829 approved an act to establish a seminary in Rankin County, to be called Pearl River Academy. In 1833 Brandon Academy was established; but neither it nor the Pearl River Academy received enough funds to operate, so the interest from their school funds as well as their governing boards were combined. The new school was known as Brandon Male and Female Academy until 1847 when the curriculum was raised to meet collegiate standards. In 1849, the school was chartered as Brandon College but retained this status for only two years, closing in 1851. The school reopened as a lower school in 1855 and changed hands several times during the next ten years. In 1865, Miss Frank Johnson took over the school, at which time it became Brandon Female College. It was part of the free public school system for a few years after the Civil War, but it later reverted to private ownership and operated until 1896. The school was located on South College Street. Johnson Hall, ca. 1837, was the Academy's major building. It was a two story brick building with a three bay facade and a quatra-style, pedimented portico. It was demolished in 1923 and its site used for the present Brandon High School.

Churches were established in Brandon soon after the town was incorporated: Brandon Baptist in 1835, Brandon Methodist in 1836, and St. Luke's Episcopal in 1848. Brandon Presbyterian Church was formally organized in 1851, but Presbyterians had been meeting there since 1847. Until their church was built on Poindexter Street, (behind [east of] the present Brandon Presbyterian Church on South College Street), the Methodists met at the courthouse. The Methodist Church was used as a hospital during the Civil War, until it was burned in 1863. After that, the church met in the Brandon Female College building until the new church was completed in 1873. The Brandon Baptists also met in the Brandon Female Academy until their first church building was completed in 1882.

As was the case in many Mississippi towns, the railroad was a factor in the early development of Brandon. The Jackson and Brandon Railroad and Bridge Company was chartered in 1836, with a bank in Brandon financing the enterprise. The bank failed during the Panic of 1837 and the project was suspended. The company was reincorporated in 1841 but failed again. The same year, the legislature approved incorporation of the Mississippi and Alabama Railroad and transferred the holdings of the Jackson and Brandon Company to it. A narrow gauge railroad line from Jackson to Brandon opened in 1849. The Mississippi and Alabama Railroad assets were transferred to the Southern Railroad Company in 1852, and that company completed the railroad through Meridian to the Alabama line in 1860. The railroad right of way ran through Brandon. A deep cut was made south of and parallel to Government Street. The track ran past the Methodist Church (on South College Street) to the turntable in McCaskill's pasture. When the railroad received financing to extend the line to Meridian, there was a disagreement about the right of way in town and to the east of town. The railroad company removed the track from the center of town to its western edge and began looking for another route. Sometime between 1850 and 1860, the depot burned and railroad officials decided to move the depot one mile north of Brandon. Local historical information maintains that many Brandon residents were glad to have the depot moved, as they objected to the noise and other unpleasant features of the trains. The removal of the railroad from the center of town probably slowed Brandon's growth. Evidence of the railroad cut can be seen near the intersection of Government and College Streets, but that is the only physical remainder of Brandon's railroad.

Although no Civil War battles were fought in Rankin County, Brandon was occupied by Federal troops in 1863 and large portions of the town were burned. The courthouse was set afire, but its stone and concrete construction caused it to burn slowly and the fire was extinguished. The Methodist Church, the post office, the government stables, and buildings on all but the west side of the square were burned. General Sherman used four, two story buildings known as the Wilkerson Block on the west of the square as his headquarters. Much of what was destroyed was not rebuilt.

Even though Brandon's population declined after the war, some measure of prosperity was noticeable, aided in part by the construction of the Vicksburg and Meridian Railroad across the county. Another indication of Brandon's regained economic prosperity during this period was the construction of new buildings for the Methodist church in 1873, the Baptist church in 1882, and the Episcopal church sometime in the 1880s.

Building of the Gulf and Ship Island Railroad from north to south in Rankin County in the late 1890s also marked a period of prosperity. The rail line ran between Jackson and Steen's Creek (now Florence), south of Brandon. About 600 laborers came to the county to build the railroad. Many area farmers derived supplemental income from this project by selling timber to be used for railroad ties. Even though the railroad did not go through Brandon, its businesses benefited from the construction of the rail line.

Brandon continued to be the center for medical services in the county. The Brandon Sanatorium, on the northwest corner of the intersection of Government and College Streets, opened in 1907. Brandon, built on the highest point in the county, was thought to be an ideal location for a tuberculosis sanitarium. The facility, which included a training school for nurses, was in operation until 1913. The building was used as an apartment house until the early 1920s when it was purchased by the Darnall family and used as a hotel. The hotel eventually closed and the building was used as a hospital once again. The hospital closed in 1956 and the building burned in 1986.

While Rankin County's economy was based on agriculture, it was not a single crop economy. The boll weevil infestations which ravaged the cotton crops in the state from 1907 to 1916 caused a decline in the county's agricultural income, but the economy was sustained by timber, cereal and fruit crops. Rankin County's population declined from 1910 to 1920, losing 726 whites and 2,946 African-Americans, probably due to out migration of farm-based employment. Brandon's population also declined during this period, but the economy remained relatively stable, sustained by its government functions and related services.

Brandon, like many other Southern towns in the early years of the twentieth century, participated in the extensive effort to memorialize the Confederacy. Beginning in 1904, the United Daughters of the Confederacy chapter had solicited subscriptions, held fund raising events, and asked the Board of Supervisors for a contribution to help pay the $3000 cost of the monument. Their requests were met with a generous response, and in 1907 a Confederate monument was placed on Government Street, in front of the courthouse.

The 1920s were a decade of considerable change in Brandon. In 1923, Johnson Hall, the main building of the Brandon Female College, was demolished to provide a site for the new Brandon High School. About that same time, the Chester House hotel burned. The church completed for St. Luke's Episcopal Church in the 1880s burned in 1924 and a new church was built the following year.

Also in 1924, the Rankin County courthouse, the fourth building used for that purpose, burned. Almost immediately, a new Classical Revival courthouse was built on the same site, designed by Noah Webster Overstreet, one of Mississippi's most notable architects. Because of the pervasive influence of the Ecole des Beaux Arts on architecture during the early years of the 20th century, many civic buildings in the United States, including Mississippi, were designed in the Classical Revival idiom. The New State Capitol, built in 1903, and approximately 30 county courthouses built during the first quarter of this century were of some variation of Classical Revival design.

The Great Depression had a pervasive effect on towns of all sizes throughout America. Evidence of changing agricultural practices and the social and economic programs initiated by President Franklin D. Roosevelt can be seen in Brandon, as in many other towns. During the 1930s, the Rankin County Co-op, constructed by the Works Progress Administration, was built on Government Street, east of the courthouse.

Brandon remained a modest-sized government and commercial center from the 1830s through the 1940s. After World War II, Brandon entered a new era with development patterns and building types which are significantly different from those of its first century.