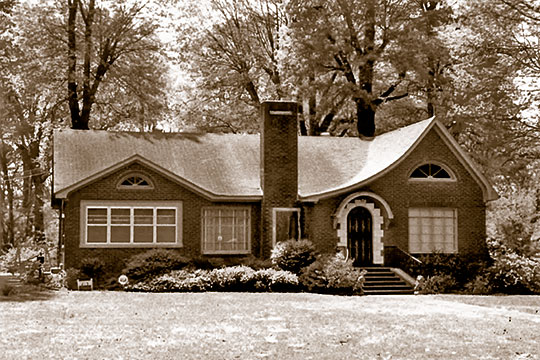 The Batesville Historic District was listed on the National Register of Historic Places in 2003. Portions of the content of this web page were adapted from a copy of the original nomination document. [‡]

The Batesville Historic District is composed of 280 buildings including commercial buildings located in and around the area known as Public Square and the residential streets that radiate from that central location to the north, south, and east. The character of the district is that of a small, rural settlement that grew into a thriving commercial and residential township after the establishment of the railroad system through the fertile area. Although the railroad still bisects the middle of Public Square and trains pull through daily, no industrial resources are present within the district. In addition to the commercial and residential buildings, the district is composed of religious, educational, governmental and social buildings.

The Lee House, located at 201 Boothe Street, approximately two blocks from Public Square, was listed on the National Register in 1989 as part of the Architecture of Andrew Johnson in North Mississippi thematic group.

The first structure in the town was the Panola Depot located at the interior of the southeast end of the present square. Three depots were used during the past 150 years but no permanent building exists on the site today. A small park and gazebo are located on or near the location of the previous depot buildings. The Public Square was gradually established to supply the needs of passengers arriving by train as well as to serve the area's agricultural shipping and hauling businesses. Residential areas grew first to the northwest (Panola Avenue) then southeast (Eureka, Church) and west (Bates) with large building lots and flat areas. Gentle hills begin just to the east of the original establishment. Most of the district is flat with a gentle rise to the east.

The first area of commercial development was to the north of the Mississippi and Tennessee Railroad with two story balconied buildings serving the town's population. Only three buildings to the north of the railroad bed remain in the original style. The buildings to the northwest of Public Square were replaced by one story commercial storefronts in the 1950's, after a fire that destroyed most of the block. The buildings on the southwest side were built in the early 1900's as the town grew. Buildings on the southwest corner, 102 Public Square, facing the square were built in the 1880's and were generally used to provide business space for exporters of products from the area. Curbs are higher on the south side of the square as the terrain rises to the southeast.

A gathering spot, the square once had a fenced area and an artesian well for the livestock near the present gazebo. An effort is underway to reestablish the green space that is now a parking lot as a renewed gathering place for residents and visitors. The well has been capped but still exists and some residents would like to have it reopened.

The residential lots on Panola are various sizes becoming smaller as sections of larger properties were divided for the infill of newer construction. Church Street remains the most intact street of the district with houses of similar style and age. Even though the street development spans more than half a century, most of the dwellings were constructed between the years 1908 and 1930.

The district's housing styles reflect the period of building by street with Craftsman Bungalows on Court and Panola to Ranch Style on West, Kyle, and Center streets. The Post World War II period houses in the district are of a vernacular character. Only a few Queen Anne or high style Victorian houses still exist even though pictorial records name a few that existed but have now been destroyed on Panola Avenue. The majority of surviving historic structures is L-front, bayed, pyramidal, and composite cottages.

Sidewalks are present on Panola Avenue, Church Street, and Eureka. Landscaping varies from casual to heavy with the soil suitable to trees, azaleas, and other shrubs.

There are four churches in the district with only three being used for religious functions. First Methodist (119 Panola) and First Baptist (104,106 & 108 Panola) have high style, Neoclassical meeting houses with secondary buildings for educational and recreational purposes. The former St. Stephen's Episcopal Church (113 Panola), in a vernacular Gothic wooden style is now a property of the city and is used for social functions. First Presbyterian Church at 121 Eureka, the core of the complex being very old (1889), has been heavily altered in the past fifty years.

Several city government buildings are in the district and cluster at the south end of College Street just off Public Square. All are in buildings that were originally built for other purposes and have been rehabilitated for use by the city.

Two schools are in the district, and both are on College Street: Batesville Elementary and Batesville Intermediate. Both retain portions of original buildings although the former High School building has been heavily altered.

The district retains the character of a small town with easily accessible shopping on the square, pleasant neighborhoods with landscaped lawns and community gathering places within walking distance. Much of the recent commercial growth of Batesvilie has been along frontage roads off Interstate 55 and on Highways 6 and 51, away from the district.