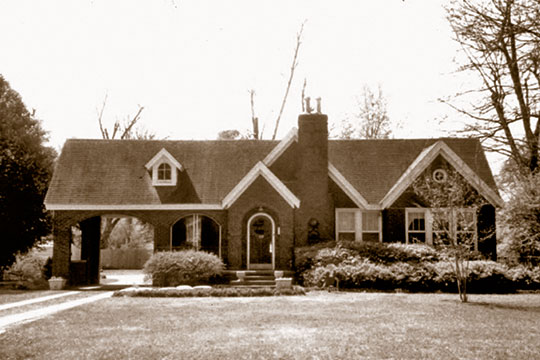 Batesville was named for, Mr. Jim Bates, a conductor on the Mississippi and Tennessee Railroad, and a prominent Methodist minister in the county. (Old newspaper articles mention "Brother Jim Bates" preaching 'eloquently' at a hanging.) The town of Batesville received its charter in 1866. [1]

Steamboat travel had been the great boom to the Mississippi Valley with the introduction of the new method of river transportation in 1812 but the railways were the mode that would set the tempo for growth in the south. During the phase between 1850 and 1860, the South surpassed the North in the building of railroads. Private companies with the support of state and county governments played a dominant role in clearing the way for the iron highway.

In 1831, anticipating the future of the rail system, the Mississippi Legislature chartered a company to build a railroad in the state. The opponents were naturally the steamboat workers and those involved in the "wagoning and turnpike building" businesses. An advantage of the railroads that could not be disputed was that it provided "all weather" transportation. Winter weather in the area had often posed problems for the dirt road travel and the river levels ebbed and flowed with the seasons.

During the 1850's a right of way was acquired by the Mississippi and Tennessee Railroad (chartered in 1852) to build a section of track through the northwest corner of the state. An area was selected some 60 miles south of Memphis as a potential stop. The point was just about two miles from the well-known river port, Panola Landing. Residents of the river port were not at all pleased with the idea and initially did not cooperate with selling the lands needed. It was assumed that the railroad would seek land elsewhere. But one resident and landowner, Reverend James W. Bates, a Methodist minister and farmer, realized the advantages of the new method of transportation. The principal investors in the rail line were Colonel Livermore and Colonel White of Memphis and said to be friends of Rev. Bates. Bates sold some of his land to the investors and encouraged others to do so.

As the tracks were laid and the Panola Depot built (on land reputed to have been sold for that purpose by W. R. Caldwell), the investors decided to name the city for Reverend Bates and also named him the first conductor of the train. Later he served as the railroad claim agent serving in that capacity until resignation on July 1,1894 due to failing health.

Before the first train arrived on September 3, 1857, the Panola Star reported from the nearby river port that a number of lots had sold with plans for livery stables, warehouses, tavern stands, and other auxiliary buildings to be erected. But the new railroad was only part of the groundwork being laid for a continuous rail line to run from New Orleans to Jackson, Tennessee.

Panola Landing was not the only river town to be affected by the new commercial center. The Panola Star reported merchants and residents from Belmont and other small settlements moving to the new site for business.

Panola Depot became known as Batesville in the spring of 1858 with the first charter issued on August 10,1860, less than a year before the first shots of the War Between the States. In 1861, trains were providing regular service linking Batesville to the rest of the country.

As the country prepared for war, volunteer regiments began to be formed with the "Panola Guards" rising out of the farmlands of the area and in 1860 becoming a part of the state's volunteer military system. Various names were given the men of Panola County as they readied themselves for service to the cause, Panola Vindicators, Panola Rangers, Panola Patriots, and the "Blues." The "Vindicators" left for their first camp near Corinth on May 28, 1860.

By 1862, with Northern troops in the state, the railroads often became disadvantages for the troops and residents. Some were even destroyed. Progress and lifestyle came to a standstill for most during this time. Panola county citizens continued to serve in various ways throughout the war. In 1862 a government hospital and firearms repair shop were placed in the county. Farmers were told to remove all cotton from their storehouses so that the staple could be burned without destroying buildings.

Following the war came a period for the nation known as Reconstruction, but it was known also as a time for the rebirth of town of Batesville. The newly formed town's charter had been revoked and the present charter was issued on October 22, 1866. Even with the losses and slowing of commercial progress the town of Batesville showed a population of 227 in the year 1870. It is likely that the town served many more that lived outside the town limits. The population almost doubled in the decade following the Civil War.