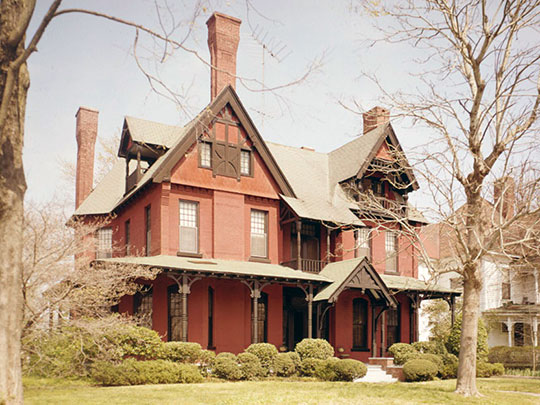 Jackson, seat of Madison County, a West Tennessee railroad center in the valley of the Forked Deer River, is a city of broad streets and tree-lined avenues. The downtown buildings are grouped around an oak-shaded courthouse square from which the residential streets radiate. The white marble of the new courthouse and the Federal building stands out against the gray and red brick of earlier structures.

Highland Avenue leads north into a section of Georgian Colonial and modified English Tudor residences. Well-built conservative homes are in the college areas. Two-story Victorian frame houses, weathered to an unsightly brown, stand in parts of the city, especially near the railroads.

Negro shanties center near the railroad tracks, for many of the occupants work on the trains, in the shops or on section gangs. In the better Negro districts, such as those around Lane College, are neat cottages and occasional brick bungalows of more recent construction.

Jackson is entered by five railroads, two of which maintain division shops. The Rebel, first streamlined train in the South, runs from Jackson to New Orleans over the Gulf, Mobile & Northern Railroad. Thousands of railroad men lie here, and three colleges bring in hundreds of students. The town serves a rich agricultural section, a middle-ground between Northern and Southern farming belts, where crops common to both are raised.

White settlement of Jackson was begun by North Carolinians in 1819, and within three years it had become the county seat. The name of Jackson was chosen because many of General Andrew Jackson's soldiers and numerous relatives of his wife lived in the vicinity.

The town was laid out with streets 90 feet wide and the first courthouse was built of logs. When lots were sold in 1822 the county allowed $20 to Joseph Lynn for whisky to enliven the bidding. In 1923 Jackson was incorporated as a town and in 1825 the legislature established a land registry office here for the Western District.

In 1833 Jackson had a population of 900. By 1840 the town was a cotton depot for the surrounding region, and in 1845 it was chartered as a city. With the coming of the Illinois Central Railroad in 1858 and the Mobile & Ohio in 1861, the town grew rapidly as a market for lumber, farm products and furs.