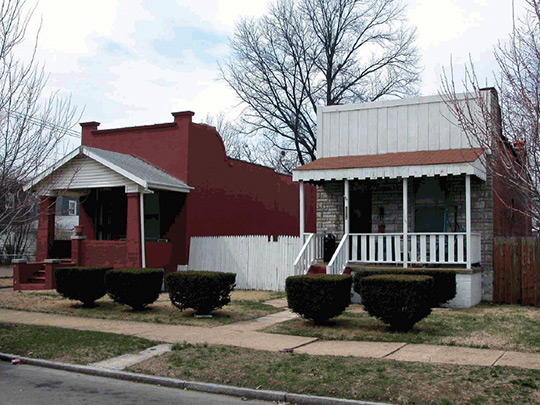 The St. Cecilia Historic District was listed on the National Register of Historic Places in 2008. Portions of the content on this web page were adapted from a copy of the original nomination document. [‡] Adaptation, copyright © 2014, The Gombach Group.

The St. Cecilia Historic District exemplifies development patterns and architectural trends brought to South St. Louis by the opening of new Streetcar Suburbs in the late 19th century. Architecturally, the 30-block district retains an intact collection of the early 20th century (and a few late 19th century) residential building types that typify the city's streetcar neighborhoods. Neat rows of single story, dwellings and two-story flats produced by builder/developers are mixed with unique individual buildings commissioned (and sometimes built) by individual owners. Although many buildings are distinctive, most are not constructed according to an orthodox style. The neighborhood is essentially one of vernacular expressions, often alluding to national style trends but rarely strictly conforming to them. The major exception is the Arts and Crafts style, which was uniquely adaptable to low-price vernacular homes. Among the 107 buildings which are considered to fall into the Craftsman/Bungalow style are dozens of bungalows which match the nationally popularized style in both form and details.

The most significant physical feature of the district may be its concentration of the local subtype sometimes referred to as "Bakery Brick" buildings. These single story houses and two-story flats (two and four family) are characterized by front parapet walls and flat roofs, with either recessed or projecting front porches. Their plans are identical to other versions of the "shaped parapet" subtype built in St. Louis in the first decades of the 20th century, but the facades are distinctive for their extensive use of enameled white brick. In the most exuberant variation, white brick is used at the base below a limestone sill course, and reappears as label courses and in patterns at the frieze and parapet wall. Built in similar (sometimes identical) patterns around the district by at least 7 different builders, these resources create distinctive streetscapes which afford a unique identity to an otherwise typical streetcar neighborhood.

The St. Cecilia Historic District covers 30 city blocks within the former Carondelet Commonfields, land jointly owned and farmed by the villagers of the settlement of Carondelet. Frenchman Clement Delor De Treget founded the village of Carondelet in 1767, about five miles south of the three year-old fur trading post of St. Louis. The site of the settlement, on the banks of the Mississippi River, was about a half mile east and slightly south of the district's southeast corner.

Though the early Carondelet settlement hugged the Mississippi, the villagers laid out a large commonfield just northwest of the village. Topography likely influenced the eastern boundary of the commonfield, now known as Virginia Avenue, which is also the eastern boundary of the district. This significant street follows a natural ridge in the landscape. To the west of Virginia was a large natural plateau, and to the east, the land gradually sloped down to the bluff along the river.

The western border of the commonfield was parallel to Virginia Avenue, forty arpents (just under a mile and a half) west of Virginia Avenue. That border evolved into Morganford Avenue. To mark the north boundary of the Commonfields, the Frenchmen used an early landmark on the river, the Indian mound known as Sugar Loaf Mound. They extended a line west from the mound to form that boundary of the Carondelet Commonfield. That line evolved into Meramec Street. Only the southern border of the Commonfields, roughly half a mile south of the district's southern boundary, did not evolve into an important street.

The French settlers divided the commonfield, not into squares like Anglo settlers, but into long, narrow strips stretching east-west. The practice would influence the later sale and urban development of the district. Carondelet settlers and the settlers of St. Louis disputed the ownership of northern sections of the Carondelet Commons. Early maps do not clearly define the overlapping areas. Hopkins Atlas from 1883 shows the then existing part of Delor Street named "Termination," suggesting the southern end of the St Louis Commons claim. The early street naming, and current house numbering follows the old Carondelet system in most of the St. Cecilia district. Beginning with Delor and continuing north, the house numbering follows the City of St. Louis system.

The French Village of Carondelet grew slowly. In 1832, it was chartered as an American town, and surveyed. In 1851, Carondelet was chartered as an independent city in the State of Missouri. Though the city numbered 1,200 residents, it had grown south of the district, leaving the area largely unsettled. Meanwhile, to the north, the City of St. Louis was growing. The shortcut between these two settlement areas was the ridge that was the eastern boundary of the Carondelet Commons, Virginia Avenue (commonly known as "Stringtown Road.") Gradually, the ridge evolved into an early road connecting the two settlements.

In 1853, the City of Carondelet enacted a ordinance providing for the sale of lands, including the entirety of the district, which had been Commonfields, and then leased for income. An 1859 map of Carondelet confirms that the Delor family owned the 22 acre strip of former Commonfield that bordered Delor Street, the north border of the St. Cecilia district, stretching west from Virginia Avenue.

Optimistically, John C. Ivory platted the huge South St. Louis Suburb in 1858 within the old Carondelet Commonfields. The 63 block "Suburb," extended from Osceola south to Eichelberger, and from Virginia west to 17th Street. The Suburb, however, was not contiguous since the strip of land belonging to the Delors was not included. The South St. Louis Suburb being so far removed from development at that time ensured that it would remain unsettled for years.

The district remained an undeveloped area between Carondelet, to the southeast, and the booming development in the City of St. Louis, to the north. Topography partially explains the slow development of the district on the west side of Stringtown Road. While industry grew along most of the river the length of South St. Louis following the Civil War, mile-long Chouteau's Bluff prevented industrial development of the riverfront paralleling the area. Unlike the town of Carondelet just south of the bluff, and St. Louis to the north of the bluff, there was no river commerce to spur surrounding residential development in the district.

In 1870, the booming metropolis of St. Louis annexed the City of Carondelet as its southernmost neighborhood, including the district. The following year, the James S. Thomas subdivision was platted along Bates Street in the southeast corner of the district. This was the corner of the area closest to the development in Carondelet. This subdivision extended outside the historic district, including an equal amount of land on the south side of Bates Street.

A short lived horse railway line during the 1870s provided another temporary link between Carondelet and the settlement at Meramec and Virginia that followed Virginia Avenue. The line, formally opened at 3:00 p.m. on May 29, 1875, was a branch of the main line which followed Broadway to southern Carondelet. The branch line left the main line at Meramec and Broadway, traveled west on Meramec to Virginia, then south on Virginia Avenue. Due to financial struggles, the line was discontinued in July of 1876.

Serious development of the St. Cecilia Historic District did not begin until the construction and opening of a streetcar line along Virginia Avenue in 1893. The Bellefontaine streetcar line proceeded south on California Avenue to Meramec Street, west on Meramec to Virginia Avenue, and south on Virginia, along the eastern border of the district. Though the northern section of the route (north of Meramec) was changed through the years, the route along Virginia was consistent. It made possible the development of the St. Cecilia district as a streetcar community: an efficient, walkable neighborhood, where the residents could conveniently commute to the industries and offices in Downtown St. Louis.

In 1894, the Veihl and Hudgens Subdivision was platted including 4-1/2 blocks at the core of the district. The subdivision was framed by Eiler on the South, Eichelberger on the north, the alley between Idaho and Alabama Avenues on the east, and South Grand on the west.

In 1910, Frank J. Hall platted Hall's Place including all of the block stretching from Virginia west to Alabama, Eichelberger on the north, and the alley between Eiler and Fassen on the south. In 1911, Horns' St. Cecilia Addition subdivided the south half of the block bordered by Alaska on the east, Louisiana or, on the west, and Walsh on the south. In 1923, construction of the western blocks of the district was spurred by a bus line continued south on Grand from where the Grand streetcar line turned onto Meramec. The line was serviced by 15 double decker buses. At that time, only a few sections of the western end of the neighborhood had not yet seen development. The final land division in the neighborhood was Drozda's Subdivision (1923), which covered the south half of the block along Bates, bordered by Louisiana on the east and Tennessee on the west.

These subdivisions, laid out over more than half a century, created a neighborhood based on a grid system, with most of the blocks rectangular in shape. Virginia Avenue, however, was at an angle to the grid system since it predated any of the subdividing of the area and followed the natural topography. The angle of Virginia Avenue creates a series of wedge-shaped or trapezoidal blocks.