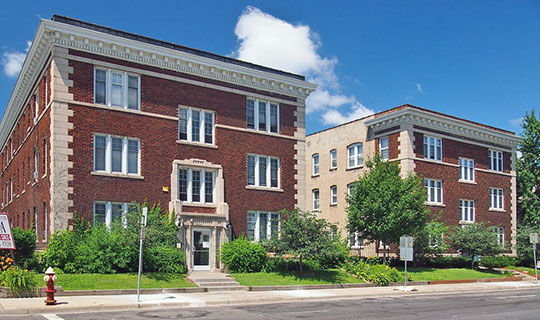 The Stevens Square Historic District was listed on the National Register of Historic Places in 1993. Portions of the content of this web page were adapted from a copy of the original nomination document. [‡]

The Stevens Square Historic District is a high-density residential area at the southern edge of downtown Minneapolis. The primary building type is a 3 1/2-story dark red or dark brown brick apartment constructed between 1912 and 1926. This building type, although lacking a well-developed nomenclature, has been described as a "midwestern walk-up" which includes buildings which contain 1- to 3-room dwelling units. There are sixty-two buildings in the District. A total of fifty-four are apartment buildings of similar size and character, and have not been significantly altered since construction. The apartment buildings occupy one to four standard city lots, and there are seven vacant or parking lots within the area. Most of the apartment buildings are rectangular in plan and closely sited, with a fairly uniform setback. However, a number of U- and E-plan buildings oriented around courtyards provide some diversity of setback. Architecturally, the buildings are good examples of 20th century revival styles from the first three decades of the 20th century, including Renaissance Revival, Collegiate Gothic, and Mediterranean Revival; they comprise an unusually coherent grouping. Stevens Square, a 2.48 acre, one-block public park, is the central focus of the District. The Square is located between 18th and 19th Avenues South between Stevens and 2nd Avenues South. Fourteen contributing buildings front directly on the Square or frame it at the corners.

Franklin Avenue provides a strong physical separation from the Washburn Fair Oaks Historic District to the south. This District includes many palatial residences. Large one and two-family residences, most dating from ca. 1885-1900, are scattered throughout the area surrounding Stevens Square, and there are a number of apartment buildings dating from ca. 1900-1940. However, none of the apartment buildings occur in the same density found around Stevens Square.

Interstate 94, constructed in the 1960s, physically disconnects the area from its otherwise close connection to downtown Minneapolis at the north. Nicollet Avenue (two blocks to the west of Steven Square) and 3rd Avenue (bordering the District at the east) are both major arteries which further serve to define the physical boundaries of the neighborhood. Freeway construction and urban renewal have altered the original physical continuity with downtown and the Loring Park area, but vistas of the downtown skyline frame the area at the north.

The Stevens Square Historic District provides an overview of apartment designs popular in Minneapolis in the period 1912-1926. A standard Renaissance Revival formula is evident on the exterior of most apartment buildings in the District. There is great uniformity in the treatment of the flat-roofed building mass, which is usually rectangular, the exterior material, which is usually brick, sometimes with stone trim, and of windows, which are usually rectangular with double hung sash. Nearly all buildings have dark red or dark brown face brick at the facade, and, except for those at corner locations, most are constructed of a light tan common brick at the sides and rear. A prominent cornice is also a standard feature. Variants of the Renaissance Revival Style are evident with Mediterranean and Collegiate Gothic examples, but most adhere to the same basic elements with tile or ornamental ironwork providing diversity. Most buildings in the District can be characterized as utilitarian, but with a successful veneer of pretentious architectural forms which resulted in a substantial appearance.

A general lack of modernization of the exterior is a standard characteristic and most of the individual features described are in original or near-original condition. Most of the buildings are in fair to excellent overall exterior condition. Name plaques, when present, appear above the entry and are cast from concrete, stone, or pressed in metal. The Renaissance Revival Style treatment of regularly-spaced elements organized between a prominent cornice at the roofline and a plain wall surface is represented by the first apartment built to face Stevens Square, the Stevens Court Apartments at 128-132 East 18th Street (1912, by W.P. Holtgren for the DeLaney Company, owner). The Anita, at 1900 3rd Avenue S. (1914; H.H. Placke, owner) is representative of a popular design articulated by beltcourses and corner quoins. The builders of each exterior of the nine buildings constructed that year in the District used a similar treatment. The Anita rests on a concrete foundation and ornamental details are also concrete; the cornice is pressed sheet metal. No basement apartments were included in the 3-story design. Of similar design, but with a full basement level and a rusticated base is the 3 1/2-story Browndale and Glendale buildings at 1700 and 1706 Stevens Avenue (1919; Joseph M. Baltuff, contractor and owner). No architects are documented in the design of any of these buildings.

Renaissance Revival motifs were employed in the design of several courtyard complexes including the Stevens Court Apartments noted above. Most notable is the Vesta, at 1817- 25-31 2nd Avenue. Designed by O.K. Westphal for the Ambassador Holding Company in 1922, the 67-unit building is the largest in the District. The 3 1/2-story brown brick building has an E-shaped plan and rests on a high limestone foundation. The quoins, cornice, parapet and entry trim are also executed in stone. Other notable Renaissance Revival complexes include the U-shaped Gladstone at 10-20 E. 19th Street (1915; E.G. Gaus, architect, for J.H. Viner), and the U-shaped Blackstone at 102-108 E. 19th Street (1915, by Anderson and Nelson Construction Company, builder and owner).

Some of the designers and builders of the apartments constructed in the 1920s utilized Collegiate Gothic and Mediterranean Revival Styles and employed tile at the rooflines, and glazed brick and tile set in geometric patterns at the cornice line. Tudor arch and Gothic ornamental details were Grafted in limestone on Collegiate Gothic Style examples such as the Darthmouth and Castleton buildings at 214 and 220 E. 19th Street, designed by O.K. Westphal for the Ambassador Holding Company and constructed in 1922. The Darthmouth and Castleton are also notable for their comprehensive landscape design, which united the two buildings with courtyards, paths, brick gateposts and ornamental ironwork.

The finest examples of the period were designed by Alex Rose for the Superior Holding Company. Completed in 1924, two 26-unit, 3 1/2-story tan brick apartment buildings at 1812 and 1820 1st Avenue South show Mediterranean and Moorish influences. The parapet is decorated in blue and tan glazed tile, and the entry is flanked by slender roped columns with palmate capitals.

Several, such as Perry E. Crosier (1890-1953) and John W. Lindstrom (1874-1962), designed a large number of apartment complexes across the Twin Cities. For at least three and possibly as many as eleven buildings in the Stevens Square Historic District, Crosier generally favored the Renaissance Revival Style. An architect who worked for Harry W. Jones, he founded a construction company in 1914. He also had a long-term business relationship with contractors Louis and Samuel Fleisher, and may have provided quick sketches for many buildings for which he is not credited on building permits. His design for the St. George Apartments at 137-47 E. 17th Street, dating from 1919 and built by the Fleisher Construction Company, is typical of his Renaissance Revival Style work. Lindstrom illustrated a notable collection of apartment designs in his Duplex and Apartment Houses, published in Minneapolis ca. 1923.

O.K. Westphal (1868-1935) designed four buildings near or around Stevens Square. As described above, the Vesta, the Darthmouth, and the Castleton are among the finest examples of complexes in the area. Little is known of the architect except that he designed the now-razed Alhambra Theatre on Penn Avenue North.

Historic landscape design of the grounds around the apartment buildings appears to have been minimal, since most buildings fully occupied their sites. Courtyard landscape design, where it existed, was enhanced by fences and gates of brick and ornamental iron. The most notable example is at the Darthmouth and Castleton Apartments at 214 and 220 E. 19th Street, dating from 1922 and designed by O.K. Westphal. A landscape designer, if any, has not been identified.