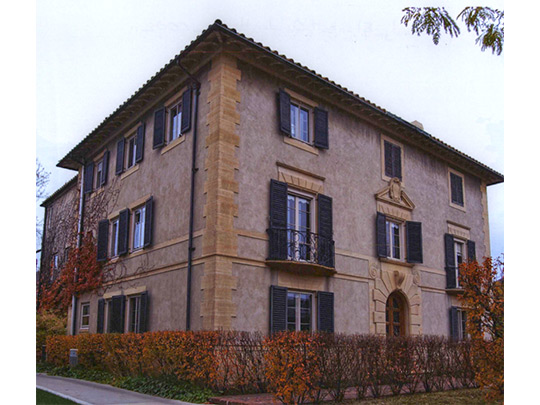 Thomas Lowry, founder of the Twin Cities streetcar system, and his father-in-law Calvin Goodrich platted the Groveland Addition in 1872. The area is bounded by Lyndale at the east, Fremont at the west, Franklin at the south and the Minneapolis and St. Louis Railroad tracks at the north,near the growing central district. The upland portion of the 75-block addition was intended from the beginning to be an exclusive residential enclave for upper-class families. Lowry established this trend by erecting his Second Empire style mansion on a five-acre parcel near Hennepin and Groveland avenues two years after platting the addition. With this, the area became commonly known as Lowry Hill. The Groveland Addition was among the earliest sections of land near the lakes to be platted and comprised the western edge of high-style residential development in Minneapolis.

By 1885, there were about 30 houses east of Humboldt Avenue S. between Groveland Terrace and Franklin Avenue. Development of Lowry Hill grew in the 1890s when improvements were made to Hennepin Avenue and to the land surrounding Lake of the Isles and Central (Loring) Parkway was purchased and improved, and an electric streetcar line was extended into Groveland Addition. Deed restrictions, such as large lot sizes, 25-foot setbacks, and minimum home construction value of $5,000, assured the neighborhood would be an enclave for wealthy residents. Much of the area was built out between 1893 and 1916 with houses designed in fashionable period revival styles of brick and stone masonry construction and brick veneer. Most houses in the area were architect-designed, whether commissioned directly by the client or through builders or contractors. Either way, the houses featured fine architectural detailing. Even some stock plan houses erected in the area were of some of the best examples.

While the Lowry Hill neighborhood witnessed its greatest growth into the 1910s, a number of open lots remained by the 1920s. The Minneapolis economy generally prospered into the 1920s, despite the decline of its major industries of milling and lumbering. The Lowry Hill area continued to be developed with high-priced homes for the city's elite, either on vacant lots or where older houses were razed for new construction.