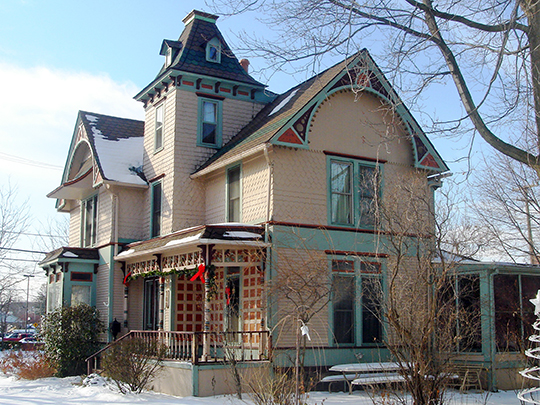 The land that was to become Plymouth was first inhabited by the Potawatomi Indians. By the early 19th century, white settlers began to move into the area. The land was well suited for farming due to good soils, few hills, and being close to a river. As more people came to the area, a small settlement grew at the intersection of two Indian trails that followed the Middle Rouge River. The early crossroads settlement, where Main Street and Ann Arbor Trail presently intersect, was called Podunk.

With the passing of the Land Act of 1820 and the opening of the Erie Canal in 1825, more settlers began to arrive in Michigan. Many of the newcomers were from New England. One of Plymouth's first recorded residents, William Starkweather, purchased 80 acres in 1825. As more settlers came to the area, residents wanted a more dignified name for their emerging community. The recently transplanted New Englanders chose Plymouth for historic and sentimental reasons. This was to be their place in the new world of the largely un-populated Midwest.

The New Englanders brought with them more than a name. One of the first acts of city planning in the area was the creation of a common green adjacent to the original Podunk intersection. Most of the Midwest was organized in a strict rectilinear manner, as seen today with the mile road system of Southeastern Michigan. Plymouth, on the other hand, grew outwards from its triangular shaped green now called Kellogg Park. All future development and lot creation was in relation to this newly created center. Plymouth's center grew thanks in part to its many successful farms, and growing mill industry. As forested land was cleared, mills on the Rouge River processed the lumber into a variety of products. By 1840, there were more than a dozen saw and grist mills lining the river.

The development of the milling industry lead to further commercial and residential growth. The downtown began to take form in the late 1840s. In 1857, Henry Connor established a hardware store a block from the central common. Connor later was part founder of the Plymouth Iron Windmill Company. As part of a promotion, the company offered a free air rifle to anyone who purchased a windmill. As it turned out, the air rifles were the real success. By 1900, Plymouth was known as the air rifle capital of the world and home of the Daisy Manufacturing Company.

Connor was a true civic activist. Besides his commercial successes, he was instrumental in bringing the railroad to Plymouth. Connor also held posts as the Director of the School Board, President of the Village, President of the Dramatic Club, and leader of the Community band, still in existence today.

The success of the Daisy Manufacturing Company paved the way for more commercial and industrial growth within the City. Alter Auto Company employed fifty people at one time, and Ford Motor Company operated a village plant in the 1920's. Keeping with the colonial spirit, the Mayflower Hotel was built in 1927. The Hotel was one of the few in the nation to operate continuously during the Depression.

Presently, the downtown area of Plymouth and Old Village are destination places for shoppers and diners. In the past ten years, numerous restaurants and shops have opened, many during one of the most difficult economic times since the Depression. While several store fronts are abandoned in neighboring towns, Plymouth has weathered the storm and experienced growth in certain areas, particularly as it relates to restaurants near and around its center, Kellogg Park. Plymouth is one of the few remaining communities where all of its residents are within walking distance to town. The people of Plymouth take a lot of pride in their community and, as such, Plymouth is a very desirable place to live, work and visit. By supporting eco-friendly development and family-based activities, Plymouth respectfully supports its history while looking forward to the opportunities of the future.