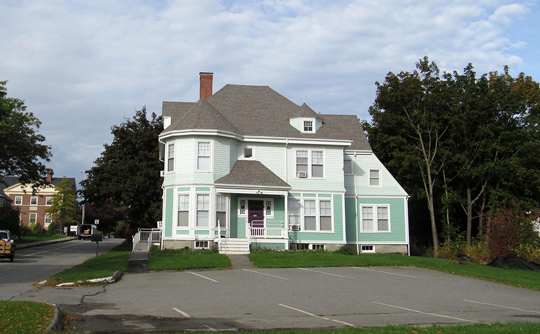 The Rockland Residential Historic District [‡] was listed on the National Register of Historic Places in 1987.

The Rockland Residential Historic District embraces a large cluster of the city's most significant nineteenth and early twentieth century buildings including residential, governmental and public structures. Although, the principal period of construction lies in the decades between the 1870s and 1920s the district contains significant contributing buildings dating to the 1840s and 1850s through 1936 when the Art Deco style Community Building was erected. The buildings are historically important as a concentration of major public edifices and houses built by Rockland's leading citizens. Architecturally, the area is significant for examples of the work of prominent builders and architects.

The City of Rockland's early 19th century development was based on shipbuilding and the lime industry. Originally part of the Town of Thomaston, Rockland broke away in 1848 and soon outstripped the older community in industrial development. This initial pre-Civil-War period of prosperity included the construction of a number of large homes and commercial blocks and culminated in 1860, with the creation of Knox County with Rockland as the county seat. This antebellum growth touched the area within the district only in a limited way. Initial development here consisted chiefly of the laying off of side streets along which a few houses were built. The small-scale Greek Revival dwellings which remain reflect on this period of Rockland's growth. The Civil War brought a depression in the lime export industry with the close of southern markets and a decline in building activity nationally which reduced demand for plaster. Sustained economic prosperity did not get underway until after the depression of 1873-76.

The earliest major building activity in the district occurred in 1873 and 1874 with the erection of two large Mansard style homes for William H. Glover and A. F. Ames, respectively, on Talbot Avenue. They were followed, in 1875, by the erection of the Knox County Courthouse on Main Street (N.R.), and a group of Italianate style homes on Masonic Street. With Talbot Avenue forming, the north edge, Union Street on the east and Masonic Street on the south, the construction of these important buildings established the parameters of what became the most desirable neighborhood in the city.

By 1888 Rockland was the largest city in the mid-coast region with over 80 lime kilns shipping 1.5 million casks of lime annually in 20 ships, 40 barks and 150 schooners. As was typical of a city this size, Rockland also manufactured boots and shoes, carriages, harnesses, and machinery. Leading businessmen frequently chose to build homes in the district. Prominent among them were the Bird family, the Cobb family, A. F. Crockett, the Glover family, Fred Spear, and H. G. Tibbetts. Some of these men, such as Francis Cobb and Fred Spear, operated lime kilns. Others owned interests in kilns, or the schooners which exported the lime, in addition to their principal concerns. As was typical of 19th century entrepreneurs, the wealthier citizens of Rockland derived their income, which fueled the city's prosperity, from a variety of sources.

The increase in residential construction coincided with the erection of a variety of public and semi-public buildings in the district. Following the construction of the County Courthouse in 1875 was the Episcopal Church of 1883-1884, the McLain Grammar School of 1892, the County Jail of 1892, the public library of 1903, and the County hospital of 1916. The erection of these buildings, followed by the high school and the Nurses Home of 1928, and the Community Building of 1936, kept this neighborhood a desirable area despite the end of shipbuilding and the lime industry in the 1920s. In keeping with national trends, new residential construction consisted generally of smaller homes built in the bungalow and period revival styles. By the middle of this century, there were few vacant lots available and new homes tended to be constructed on larger lots in outlying areas of the city. At the same time, many of the spacious 19th century residences underwent conversion into multifamily dwellings.

The architectural character of the district is dominated by large homes in the Queen Anne style and public buildings in variations of Neo-Classical modes. For the latter, leading architects from outside Rockland were hired. These included Boston's Bryant and Rogers (the County Courthouse), George Clough (the public library), R. Clipston Sturgis (the County hospital), and William Ralph Emerson (the Episcopal Church). Also important were Lewiston's Elmer I. Thomas (the McLain School), and Augusta's Bunker and Savage (the high school). Prominent Maine architects designed a few of the residences, such as Charles F. Douglas (the William H. Glover House), Kimball and Coombs (the A. F. Ames House) and E. E. Lewis (the Charles Littlefield House). Local architects and builders, however, were primarily responsible for shaping the architectural character of the residential areas.

Among Rockland's 19th century architects, builders and carpenters, one firm, W. H. Glover and Company, clearly dominated the building trades. This firm, which figured prominently throughout the state, sold lumber, sash, doors and blinds, mill-work and cast iron elements, as well as architectural designs. Indeed, one member of the family, Edward F. Glover, apparently served as the company architect. That this firm based its architectural designs on published sources or on the work of architects for whom they had erected buildings, seems clear. Each of the four Glover family members who lived in the district owned houses either designed by prominent architects or borrowed from locally-known architect-designed residences.

By the early 20th century, building activity in Rockland declined. For the smaller homes typical of this period, local architect Freeman Stanley apparently supplanted the Glovers. The district includes several examples of this man's work, mostly in the Bungalow style. Stanley's designs are finely detailed and among the best examples of this mode in the state. The Allen House at 107 Limerock Street and the Roakes House at 129 Limerock Street are particularly outstanding.