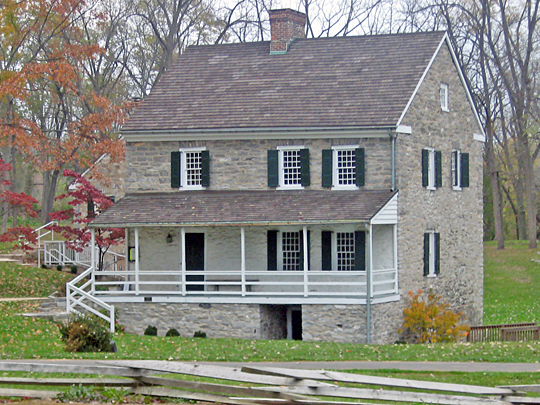 The City of Hagerstown is located near the center of the width of a fertile basin between mountain ranges known as the Cumberland Valley. It was laid out in 1762 by Jonathan Hager, a German immigrant who was a farmer, miller, and fur trader. The original town was divided into 520 lots and was located at the intersection of prominent colonial roads. One of these led down the Cumberland Valley from Harris' Ferry on the Susquehanna River to Williams' Ferry on the Potomac River. Another, the Philadelphia Wagon Road, led west into the frontier.

Hagerstown was incorporated in 1763. It became the county seat of newly formed Washington County in 1776.

Hagerstown has been, since the 18th century, a commercial center for not only Washington County, of which it is the county seat, but of a larger, tri-state area which includes southern Franklin County, Pennsylvania and the eastern panhandle of West Virginia. During the late 19th century, Hagerstown became a leading manufacturing city in Maryland with the production among other goods of furniture and organs. It also became a rail center. These industries resulted in a great population growth and a commercial boom period that occurred between 1880 and 1920. This economic boom is reflected in the almost total redevelopment and transformation of the downtown commercial area during that period. Large hotels catering to rail and automobile travelers were built and commercial establishments were either remodeled or built new to reflect the prosperity. The Washington County Courthouse and the Hagerstown City Hall helped to establish the direction of commercial growth along West Washington and North Potomac Streets.

Hagerstown was a crossroads of major highways as well as a major railroad center. Early advertisements for the Dagmar Hotel, for example, emphasize its advantageous location opposite the B & O Railroad and near the Cumberland Valley and Norfolk and Western Railroad stations.