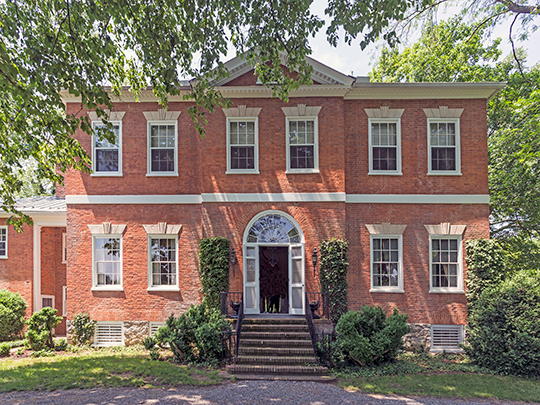 Williamsport has a large tannery, a silk mill, a broom factory, brick kilns, limestone quarries, and an electric power plant. The commercial briskness contrasts sharply with the peaceful air of the town, whose streets are unusually wide and lined with substantial brick and stone houses. Set on high ground at the confluence of the Potomac River and Conococheague Creek, this place was at a junction of important early trails; the major part of Braddock's army used one of them in 1755 on the retreat to Frederick. In 1786 the town was laid out by General Otho Holland Williams for whom it was named. Williamsport, already a busy shipping point, petitioned Congress to be selected as the 'Federal City,' and was inspected by Washington in October 1790; the fact that the Great Falls of the Potomac prevented large vessels from ascending the river was one cause given for denial of its petition. The post office stands on the site of the Blue Corner Tavern, built in 1787 of stone, stuccoed and painted a vivid blue. It was operated until 1881 when it burned.