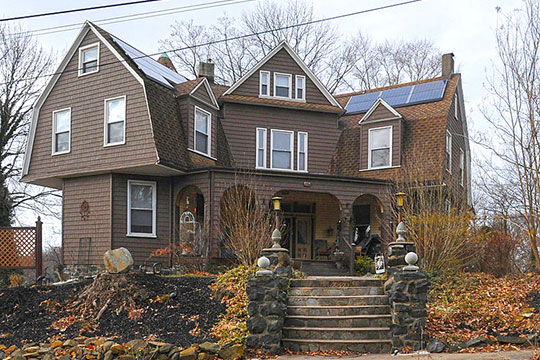 The Windsor Hills Historic District was listed on the National Register of Historic Places in 2002. Portions of the content of this web page were adapted from a copy of the original nomination document. [‡]

Windsor Hills is a neighborhood in northwest Baltimore built gradually from 1896 to the start of the Great Depression. It is bounded on one side by the wooded Gwynns Falls Valley, so while it is well within the urban boundaries, it is nonetheless secluded. The neighborhood is of architectural significance for having a number of excellent late Victorian houses, and a balance of houses which, though more modest, compliment their larger neighbors stylistically. The neighborhood is also significant for having a street plan which departs from the urban grid to take advantage of its hilly topography.

Though there was a time when the estates outside the bustling City of Baltimore (and other east coast centers) were owned by country gentlemen who kept their distance from the city. By the late 19th century the large landholders near urban centers usually had business interests there in addition to their estates. Just a handful of men held the hilly territory that came to be Windsor Hills. Thomas Winans, son of railroad pioneer Ross Winans spent many years in the family business and took an active interest in land speculation. His holding in Windsor Hills was considerable, but sat dormant while the millionaire managed nearby estates "Crimea" (now Leakin Park) and "Alexandroffsky." The even more active real estate trader Hugh Gelston owned a parcel adjacent to Winans. Another large portion of what would become Windsor Hills was part of George Vicker's "Mount Alto" estate. Vicker's house and outbuildings stood on the eastern side of Garrison Boulevard, in what is now the Mount Alto neighborhood. Jesse Slingluff, a bank president, owned property to the north of Windsor Hills.

The first permanent structures in Windsor Hills, a pair of Italianate villas, were built sometime after the Civil War. It is rumored that they were built for a pair of heiresses, and local tradition holds that they derive their names, Tusculum and Monticello, from schools run there by Adele and Alfred Bujac. By the 1870s William P. Webb, an insurance broker, and Charles Hilgenburg each owned one of the houses, and would keep them well into the 20th century. Baltimore city demolished Monticello in 1925 to make way for a new elementary school. Tusculum became the Shiloh A.M.E. Church, on Lyndhurst Avenue.

In 1889 Edwin L. Tunis purchased the Windsor Hills properties of Gelston and Winans with the intention of starting a residential development. He established the North Avenue and Windsor Park Land Companies as commercial bodies for his pursuit. Nearby Walbrook offered downtown trolley service, which by 1902 would be extended along Clifton Avenue into Windsor Hills. Thus the earliest residents of Windsor Hills were able to easily commute the 4-1/2 miles to downtown Baltimore. Journalists called Walbrook a 'true suburb.' Earlier annexations to Baltimore had started as independent villages or towns, and were incorporated as the ballooning city engulfed them. Walbrook developed at an important crossroads, however, and in this regard, Tunis' speculation was more daring, as it moved away from established roadways and settled territory.

Two other Baltimore residential developments were experimenting with curvilinear streets and naturalistic forms in the same period of time, Sudbrook Park to the Northwest, and Roland Park to the North. Frederick Law Olmsted and his successors were involved in these two projects, but Windsor hills, though similar in some regards, was independently conceived. The Plat, establishing present roadways and lot lines, was drawn by Tunis' son Howard in 1895.

Such faith had Tunis in his project that he occupied the first house built there ("The Cliffs" at 2520 Talbot and later, 4509 Prospect Circle). Shortly thereafter, his son built a house nearby, and the Tunis family still maintains involvement with the Windsor Hills community. By setting down roots in their fledgling suburb, the Tunis' were able, at least by precedent, to influence the stylistic course of Windsor Hills. Until the first World War most houses built in the neighborhood followed the example of the Tunis's. Structures were built on large lots, in simpler American Victorian styles, mostly large Shingle Style cottages, more modest Dutch Colonial Revival and un-ornamented American Foursquare houses.

These heights are like the foothills of a mountain range and disclose to those sufficiently athletic to climb their peaks, bewitching glimpses of adjacent hills covered with verdure, with gray rocks and deep ravines between. The altitude of this part of Baltimore county and its picturesqueness are probable the reason it was early chosen as a vicinity adapted to suburban development unrivaled about the city of Baltimore.

John Stilgoe remarks in Borderlands that in the 19th century the view of the city was generally drawn from a semi-cultivated forest promontory. "Artists [of the late 19th century] not only depict cities from borderland vantage points, they emphasize the picturesque vantage point as the significant foreground." This emphasis suggested and reinforced the desirability of being outside of the urban center. As the century moved on the educated class escaped permanently to these elevated removes. And it is in fact possible to view downtown Baltimore from the upper floors and towers of the early mansions of the neighborhood.

In 1904 the Olmsted brothers recommended to Baltimore City a park on the promontory surrounding the present intersection of Bateman and Lyndhurst Avenues. Though the park was never built, this was the site of the first Windsor Hills buildings outside the North Avenue and Windsor Park Land Company's developments. Though not tall enough to offer significant views, these Dutch Colonial Revival style cottages, built of stone, did have the advantage of cross breezes along the hilltop.

With the Bateman Avenue cottages began the second phase of development in Windsor Hills, which overlapped the early development around 1910 and continued until the Great Depression brought building to a halt. Small land developers and builders bought parcels big enough for five to ten similar houses. Many of these would become Craftsman-style Bungalows, which dominated the residential scene for much of the early 20th century throughout the country, but there were also more Dutch Colonial Revival cottages built, as well as houses derivative of the Shingle Style. Though residences built in this phase exhibit less variation locally (by being put in rows of similar, occasionally identical houses), they nonetheless fit into what came before them in Windsor Hills. Shingle siding (at least originally) predominates, and many foundations are made of the same rough stone that older houses used. Both materials bring a rustic continuity to the neighborhood.

Buildings constructed in Windsor Hills after development resumed following the economic recovery from the Depression tend to be of an infill nature and not necessarily responsive to the original intentions and the preexisting built environment of the neighborhood. For this reason, ca. 1930 was selected as the terminal date of the period of significance for the district.