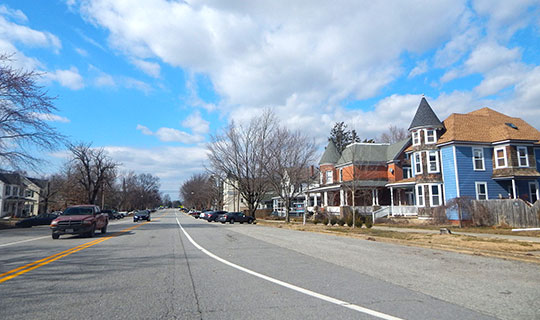 Ridgely is unique because the Town did not evolve from a crossroads village, like traditional Chesapeake Bay communities, but was planned and designed to become a large regional trading city. Ridgely was envisioned as a future "boom-town" and it was designed on a grid-pattern to allow for structured expansion. The Town was founded in the post Civil War period, as land speculation and railroad expansion booms were initiated across the Delmarva Peninsula. With the end of the Civil War, northern railroads were able to continue their expansion plans and investors and merchants looked for new markets and sources of supplies for urban areas. With its rich agricultural bounty, Ridgely was considered a prime source of supply for these urban markets.

The land around the present day community of Ridgely was purchased in 1867 by the "Maryland and Baltimore Land Association" from Thomas Bell, who was a local farmer. The gentlemen who owned the Land Association had a vision of a large community that would stretch from the railroad southward to the Choptank River, a distance of about four (4) miles. The town was named after Reverend Greenbury W. Ridgely, who was instrumental in the formation of the Town. The beautiful wide tree-lined main-street of downtown Ridgely harkens back to the 19th Century in picturesque style.

According to the Historical and Industrial Edition: The Founding of Ridgely and the Early Days of its History, published in 1912 by the Ridgely based "Caroline Sun," the Land Association was only able to attract a few individuals to its site in 1867 and the railroad did not actually arrive in Ridgely until 1868. However, during the first year and before the Land Association went bankrupt, the current layout of Ridgely's streets were established. The wide streets and the Town's grid pattern were intended to serve as the heart of a major trading city that the Land Association hoped to create and unite the railroad with the Choptank River.

That first year also saw the erection of several buildings. Among them were a railroad station and the Saulsbury family store and residence. The latter survives as the Ridgely House at Central Avenue and Railroad Street, purchased by the Commissioners of Ridgely in 2002. The building serves today as the Town Hall, anchoring the redevelopment of the downtown business district. The railroad station was replaced in 1892 with the present building.

Once the deeds and financial arrangements of the Land Association had been cleared, Ridgely began to slowly grow as a rural commercial and industrial center on the Maryland and Delaware Railroad line. This line connected Easton and the towns along the railroad with the main Pennsylvania Railroad trunk line that ran down the center of the Delmarva Peninsula in Delaware. From the beginning of its actual growth until the middle of the 20th Century, Ridgely had a number of industrial operations related to processing local crops. There were several canneries and basket factories. Most of the local farmland was used to produce fruits and vegetables for urban markets, which were either processed in Ridgely or hauled north in refrigerated railcars for sale as fresh goods for processing in the larger urban factories.

By all accounts and after its initial slow start, Ridgely was very prosperous. Throughout most of its history, there was at least one hotel near the railroad and the commercial strip along Central Avenue contained its fair share of clothing, furniture, jewelry, and stores for household dry goods. There also were specialized repair and manufacturing utilized by the local population. Ridgely was able to support several doctors and there was a small rural hospital located in the Ridgely House. An interesting note to the success of Ridgely is that many of those who helped start the Town, and who purchased building lots in and around the community, were not natives of Caroline County or of the Eastern Shore. Many of the new residents came from Pennsylvania and New York. Others came from New England and the upper Midwest. A significant percentage of the new residents were not of English ancestry but were of German ancestry.

One industrial plant that might have had a dramatic impact on Ridgely, if it had remained open, was the construction of the Armour Company Food Processing Plant on the lower portion of Bell Street. Begun in 1911, the plant employed almost 1,000 people at its peak of operation. In addition to the main plant building and its associated support buildings, the Armour Company also constructed housing for its employees at the plant site. The plant processed two million quarts of strawberries per year. It was considered the largest such plant in the world. The plant was intended to handle the initial processing of strawberries and other local berries, which would be capped and cooked in copper kettles and packed into five-gallon containers for shipment to other Armour plants for final processing. The plant was only in operation for six or eight years. It was closed by the Armour Company in response to an anti-trust suit filed against the company by the United States Government.

Both before and after the Armour plant was in operation, the Ridgely Fruit Growers' Association maintained a fruit exchange for area producers. The Association was established to help local farmers market their crop and ensure that satisfactory prices would be paid for their produce. The Association also helped with transportation arrangements with the railroad. The Association seems to have been disbanded sometime in the 1920's, as the cost of harvest labor rose beyond the market's ability to cover the costs of production.

The next largest industrial venture in Ridgely was the 1939 opening of the Breyer Ice Cream Plant on upper section of Belle Street. This plant was used by the company to process local milk for use by the company's ice cream plants located elsewhere. This plant was designed to convert 90,000 to 100,000 gallons of milk per day. The plant remained in operation until 1961, when the Breyer Company stopped processing its own milk and began to purchase it from suppliers.

Change and the current size and condition of Ridgely came with the general shift from railroad transportation to highways and trucks in the 1950s. As business and industry began to concentrate in larger urban areas, the factories and processing plants in Ridgely could no longer compete with larger and more modern facilities operated by regional and national corporations. There is only one food processor currently operating in Ridgely, the Hanover Foods Freezing Plant, on the western side of Ridgely. The other major commercial operation is a fulfillment center, New Roads, currently in the process of downsizing or even possibly eliminating their presence in Ridgely. Their headquarters building is located in the former Breyer Company's plant on Bell Street.