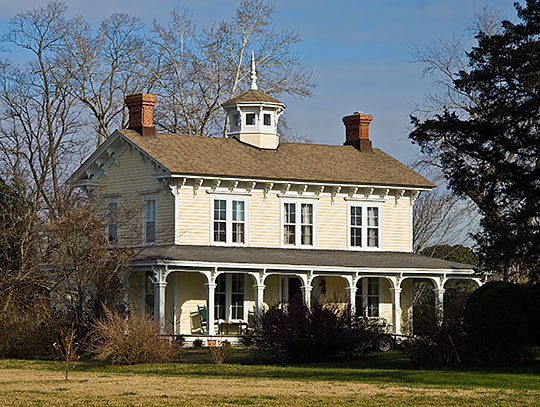 Denton, the seat of Caroline County, is located on the eastern bank of the Choptank River and near the geographic center of the County and the Eastern Shore of Maryland. Today, Denton is the governmental, commercial, and employment center for a large rural area. The town began as a small settlement on Pig Point, which projects into the Choptank River. About 1773, the settlement was named Edentown in honor of Sir Robert Eden, a contemporary English statesman. Soon after the American Revolution, the village's name was contracted to Edenton, and in 1790, when the Assembly Act provided for the relocation of the County Seat from Melvill's Warehouse, it was shortened once more, to Denton. By this time, the town was a trade center of some importance. A wharf was constructed in the Town on the Choptank River in 1792. In 1793, four acres were secured for the construction of a Court House. The original Court House was replaced by a larger one in 1895, which remains in use today (a major addition was completed in 1967).

In 1827, a market place was opened where the Masonic Hall now stands, facing the public square. Farm produce was sold here as were slaves. In 1835, the first factory was built in Denton to manufacture plows.

Early travel to Denton was by water. The first steamboat came up the Choptank River to Denton from Baltimore before 1850. It made only one trip, but later the "Dupont" made weekly trips between Denton and Baltimore with freight and passengers.

About 1792, probably to shorten the distance of the ferry across the Choptank, a causeway was built across the marsh on the east side of the river. In 1811, the Denton Bridge Company was formed and a toll bridge was constructed. This bridge remained a toll bridge until shortly before the Civil War, when it was sold to the County. In 1875, it was replaced by the iron bridge which remained standing until 1913, when another iron bridge was constructed. This bridge lasted until March of 1976. At that time, extensive reinforcement was done on the bridge until a new concrete bridge could be built. Construction of the new bridge was begun in early 1980 and the present bridge was dedicated on Memorial Day weekend, 1981.

Sometime before 1860, there was a stage line started between Easton and Felton, Delaware via Denton. After 1860, the stage met the Chester Riverboat at Queenstown. Improved transportation routes enhanced Denton's position as a trade center and by the time of the Civil War, new stores, shops, schools, and churches were constructed.

The Brick Hotel, built in 1775, was first a tavern and inn. In the early 1900s it was a place for local men to gather and discuss issues of the day. The Brick Hotel was also the summer home for writer Sophie Kerr Underwood, and may have based her book One Thing is Certain on people in Denton.

Most of the business district was wiped out by a fire in 1863, when a company of Union soldiers stationed as guards in the Town, celebrating the Fourth of July with fireworks, accidentally set fire to a shop building. The ensuing fire burned almost all of the business part of town, which consisted of several stores, a hotel, and a rum shop.