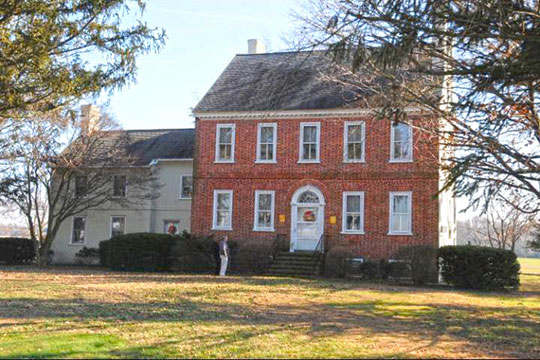 The incorporated Town of Greensboro, pleasantly situated near the headwaters of the Choptank River, is one of the oldest inland towns on Maryland's Eastern Shore. An act passed in 1732 by the General Assembly legislated that twenty acres of land were to be purchased from Dorchester and Queen Anne's Counties where each bordered either side of the Choptank Bridge. The act also specified that this town at the "Great Bend" in the river was to be called "Bridge Town." That planned town, the ancestor of what we today know as Greensboro, was not exactly a successful venture. By 1737 only two non-adjacent settlers occupied lots within Bridge Town's limits. Of the twenty building lots parceled out at each end of the bridge, only one lot was sold. In 1740, the unsold lots reverted to their original owners.

As early as 1736, Peter Rich, an innkeeper, acquired two tracts adjoining the western side of the Choptank Bridge. During his lifetime Rich sold only one lot inside the "Great Bend." In 1779 another Peter, namely Peter Harrington (one of Rich's grandsons), began to sell building lots on the hill above the bridge's west side. By 1783 he had founded a town on this hill — the town we now call Greensboro.

A few of the buildings which date from the time of the original Harrington settlement are still standing, including the founder's two-story brick house. It is located on the present-day northeast corner of Bernard Avenue and Church Street. Among the many structures from that era which no longer exist can be counted a tobacco warehouse (one of the first buildings erected near the bridge's west end) and a county wharf. Lot sales for the tracts at each end of the bridge remained sluggish, even into the nineteenth century.

When resurveyed in 1791, the name "Bridge Town" was changed to "Greensborough." The town was somewhat different in its plan in 1791 than it is today. Main Street at that time lay nearer the river. It joined Railroad Avenue a block below the present conjunction and, by a winding way, reached the Main Street of today (a short distance from the Riverside Hotel). The first mention of the street now called Sunset Avenue appeared in a deed circa 1793. There it was mentioned as the "new road leading from the village of Greensborough." There is also evidence, from a deed drawn up in the year 1812, that the present Main Street had by that time superseded the road from the Choptank Bridge (to Nine Bridges) in importance.

By the 1880s, Greensborough was firmly established as a Caroline County town; it was no longer halved between Dorchester and Queen Anne's Counties. At the turn of the century the village underwent a great period of prosperity. At this time the Choptank River was utilized as a transportation corridor for commercial shipping. It was during this boom period that the greatest population increase for Greensboro was recorded. The need for Greensboro as a marketing and industrial center began to diminish with the advent of new transportation options. As a result, the growth rate declined and the Town became primarily a residential center. The Town has since shown a stable population pattern but with a significant increase recorded recently.