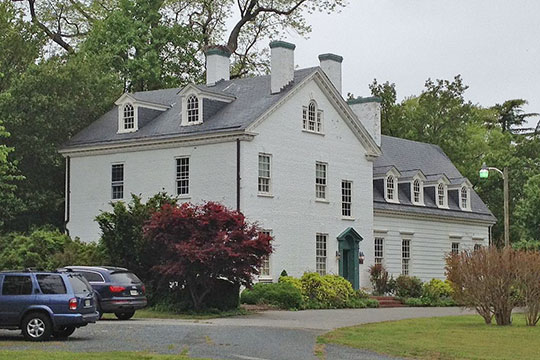 Dorchester county is the largest on the Eastern Shore, having an area of 610 square miles, and ranks fourth in point of size in the state. The Great Choptank river and Caroline form its northern boundary, and it has a few miles of eastern border on the Delaware line. The Nanticoke flows along the southeastern border, and on the south and west arms of the Chesapeake and the bay itself enclose the county. Dorchester was formed in 1669-1670, and its name is traced to the earl of Dorset or to Dorsetshire. Various islands are included in its territory, and the Little Choptank, the northwest fork of the Nanticoke, Honga, Fishing, Blackwater, Transquaking, Chicacomico, are rivers and creeks of Dorchester. Fishing bay, Tar bay, Trippe bay, Hooper's straits, and other bodies of water add to the geographical nomenclature of the county. There is a great extent of marsh land, frequented by myriad wild ducks, and oysters, crabs, and terrapin abound in the county waters. Sand, clay, and marl make a diversified soil, and corn, wheat, potatoes, tomatoes, and fruits are grown. Great quantities of oysters, tomatoes, and corn are used by the packing-houses. The annual income from the oyster catch is $1,000,000 or more, and Dorchester ranks next to Somerset in this industry. Cambridge is the home port of a vast fleet of dredging and tonging vessels, the seat of large packing establishments, of shipyards and other manufactures. The Cambridge and Seaford and the Baltimore, Chesapeake, and Atlantic railroads traverse northeastern Dorchester, and steam and sailing vessels reach all parts of the county lying on water. Cambridge, the county seat, with a population of 5,747, has a fine salt-water situation on the Great Choptank, 18 miles from its mouth. The river here, between the Dorchester and Talbot shores, is several miles in width, and the town is built on level ground, extending to the water's edge. The streets are well shaded, and brick and stone structures predominate in the business section. East New Market is in the midst of a thriving agricultural section, has a population of 1,267, and Secretary (on Secretary Sewell's creek), Hurlock, Williamsburg, Salem, Taylor's Island, Bucktown, Linkwood, Dailsville, are some Dorchester villages. Vienna, on the Nanticoke, was long noted for its shipyards, and many swift and shapely ocean-going vessels were built there before steam and iron supplanted wood, and when the white oak forests of Dorset still afforded the best material known in former naval construction. Dorchester was harried by the British during the War of 1812. Governor John Henry, first United States senator from the Eastern Shore, and William Vans Murray were from this county.