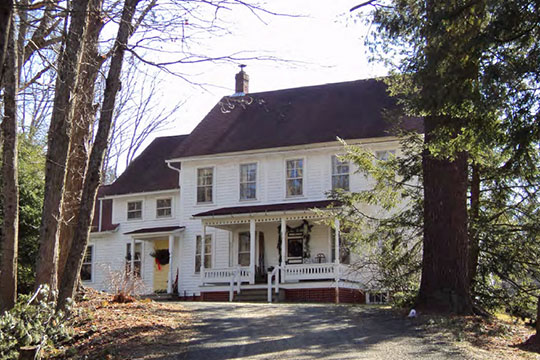 The East Leverett Historic District was listed on the National Register of Historic Places in 2013. Portions of the content of this web page were adapted from a copy of the original nomination document. [‡]

The East Leverett Historic District is in a small village centered on a crossroads and a waterway known as Roaring Brook. The crossroads are formed by the intersection of Shutesbury Road, Cushman Road, and Still Corner Road in the town of Leverett. Properties in the district are set mainly on the slopes of a valley above a deep ravine that Roaring Brook has created as it travels southwest through the district. The slopes are formed by Brushy Mountain on the north and the January Hills on the south and east. Buildings that make up the district predominantly date to the late 18th and 19th centuries and are in good condition. They have clapboard exteriors with granite-block and fieldstone foundations, and are oriented towards the roadways rather than the sun. They are set close to the road on relatively large lots and in alignment with each other. Stylistically they range from Federal to Greek Revival and Colonial Revival. Along Roaring Brook in the ravine are the archaeological remains of former mills, dams, a tannery, and a canal, all dating from the 19th century. The district includes a village cemetery containing the graves of many of East Leverett's residents, and marked with stones that represent local stone carvers' art from the late 18th through the beginning of the 21st century.

The buildings of East Leverett are stylistically in the mainstream of 19th-century architecture, following the forms and decorative details that builders used throughout western Massachusetts. The Greek Revival style appeared in East Leverett in the latter half of the 1820s. One of the first examples of the style is the Lewis and Elizabeth Moore House, ca. 1825, 152 Shutesbury Road. East Leverett has an example of the Italianate style in the ca. 1850 Jervis Gilbert House, 75 Cushman Road. There is one Gothic Revival style house in the district, at 191 Shutesbury Road; it dates to ca. 1850. The Julian and Martha Miller House, 167 Shutesbury Road (LEV.30), was constructed in 1901, and is Queen Anne in style. Pine Grove Farm, 142 Shutesbury Road, is a ca. 1940 Colonial Revival-style, Cape Cod-form house.

The map of 1794 shows that by that date, Shutesbury Road from Leverett Center came south to East Leverett, continuing farther south to Amherst over a bridge across Roaring Brook; the map also shows that the Lancaster‑Sunderland cartway was in place, connecting East Leverett to Shutesbury and eventually Lancaster on the east, and to Sunderland and the Connecticut River on the west. These roads made local travel possible, but they also enabled millwrights to establish a sawmill and a fulling mill on Roaring Brook. Leverett historians have consistently pointed out that the Lancaster‑Sunderland cartway allowed millwrights to transport milling equipment from the Saugus, Massachusetts, ironworks to western Massachusetts. In fact, upstream of the bridge where there was a substantial drop in the brook, a combination gristmill and sawmill and a fulling mill were already in place in 1794. During the Federal period (1775-1830) the population of East Leverett was substantial enough to warrant two stores, a cemetery, and a post office in the second decade of the 1800s.

East Leverett continued to grow and diversify its industries during the first four decades of the Early Industrial period (1830-1870), but reached its limits about 1860 and began to decline during the following decade. By about 1835 the population of the village had increased enough to merit a school, and the East Leverett School was built at 146 Shutesbury Road.

East Leverett in the Late Industrial period (1870-1915) became economically depressed, as the small mills could no longer keep up with competition in the larger cities and towns of the region. As the small operations closed or reduced their production, East Leverett residents shifted to working in Amherst, Northampton, and Hadley. Some stopped working altogether, sold their houses, and moved away. Still, the school continued to serve the children of East Leverett, and in 1909 a room was added to the east end.

East Leverett underwent a significant demographic change during the Early Modern period (1815-1940). No longer an active industrial and farming village, East Leverett' s economic decline continued. Its buildings declined similarly, until most were owned by absentee owners or were highly mortgaged. And residents had limited options if they wanted to work locally. As an indication of how strapped one villager was, George Boynton at the Porter and Ebenezer Nutting House, 21 Still Corner Road, ca. 1806, made his living as a trapper, selling game to restaurants, and fishing in Roaring Brook with nets.

In the Modern Period (1940-1961), Dorothy King, an artist, restored the Roswell and Sarah Field House, 119 Shutesbury Road, ca. 1790, beginning in 1953, and she bought the Seth Wood House, 131 Shutesbury Road, ca. 1793, in 1942 from Mintie Field, who had previously worked on it. Chester Woodward worked with King as he had with Seagrove. In 1950, the East Leverett School finally closed and was sold to become a single-family home. In 1959, the dam just above the bridge from 167 Shutesbury Road washed out, and ten years later a second dam on Roaring Brook was lost. With these losses, all industrial activity ceased. After World War II, with a national housing shortage, faculty members from the Amherst campus of the University of Massachusetts discovered East Leverett and began to buy houses for year-round residences. Once again the demographics of the village changed, as summer people and people who traveled to nearby towns to work, were replaced by university faculty. East Leverett also became known as home to many painters, writers, musicians, and furniture makers.