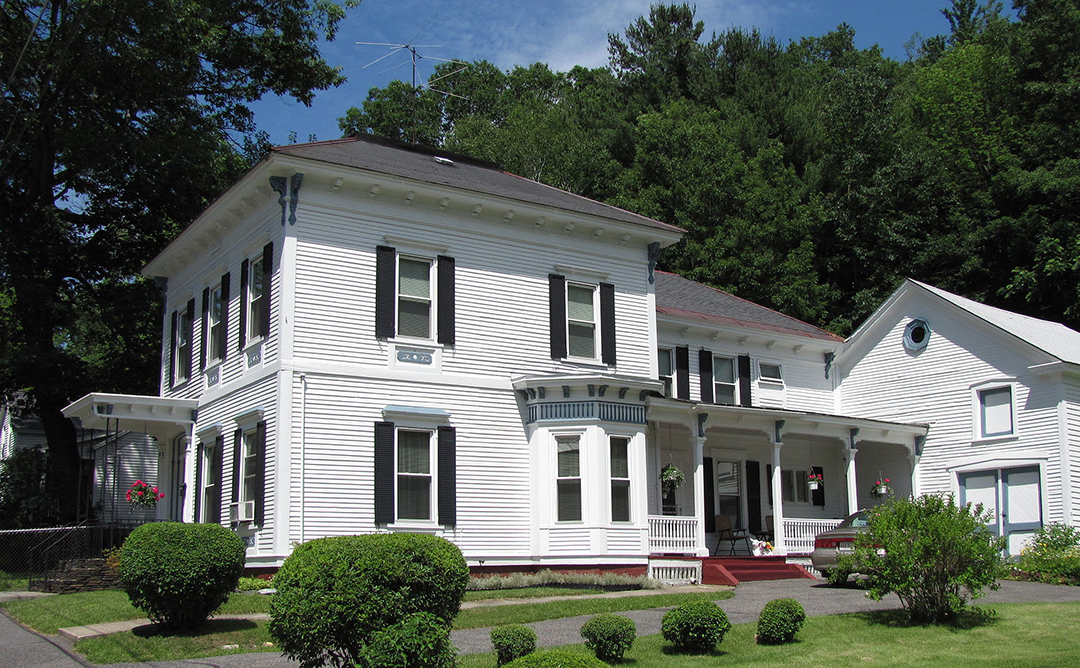 First surveyed in 1739, the township included the present town of Adams and the City of North Adams, and was eventually named East Hoosac. As originally surveyed, East Hoosac was a perfect rectangle imposed upon an irregular terrain, 7 miles long and 5 miles broad. Shortly after the survey, during hostilities between the English and French settlers that began in the 1740s, a series of forts was constructed in western Massachusetts to guard against French and Indian incursions. Fort Massachusetts, built in 1745 in a narrow part of the valley, protected the northern route through East Hoosac. The fort was destroyed by enemy attack in 1746, but it was rebuilt in the following year and, garrisoned by 100 men, withstood a second attack in 1747-1748. By the end of the hostilities in the early 1760s, the fort had begun to decay and it was almost completely dismantled by the time of the Revolutionary War.

In 1760 the Commonwealth of Massachusetts sold East Hoosac to three men — Nathan Jones, John Murray and Elisha Jones — upon the condition that they develop the area, also known as Settling Lot Number 24. Israel Jones, son of one of the proprietors, moved to the northern portion of the township to oversee the property. By 1778, when the town was incorporated and the name of East Hoosac was changed to Adams, the population numbered about 400-500 people. The town was named in honor of Revolutionary War patriot, Samuel Adams.

Three primary roadways had been laid out in North Village — later North Adams — by the 1780s: East Road (now Church Street), Main Street (perpendicular to East Road and an extension of the Mohawk Trail from the east), and Center Street, now Eagle Street. By 1782, the remote community had its first meetinghouse on Church Street, 39 feet long and 30 feet wide. The building was moved in 1795 to the edge of the present-day Monument Square and the site of the Baptist Church (1879). In 1829, the meetinghouse was again moved to its present site on North Church Street, behind the Baptist Church, and converted into residential and commercial use. Despite the presence of the meetinghouse and a cluster of homes, North Village by the close of the Revolutionary War remained essentially a struggling frontier community.

North Adams' first settlers recognized the industrial potential of the Hoosac River, especially in the northern portion of the township where the farmland was poor. They used the dense stands of pine and white oak that grew on the Hoosac's floodplain as an early staple of local trade. Taking advantage of the river's power resource, Oliver Parker, Giles Barnes, and others constructed lumber and grist mills along the banks of the north branch in the 1770s. Although these mills were destroyed by a catastrophic flood in 1780, they were repaired or rebuilt by other settlers of North Village. The export of high-quality pine lumber became the first industry of the area, and lumber mills continued to operate into the 19th century. North Village quickly acquired the sobriquet "Slab City," because dealers sent their best lumber to market, saving their scrap material to build buildings and fences at home.

During the last decade of the 18th century, additional industrial enterprises were begun, including a blacksmith shop, a fulling mill, an establishment to manufacture cut nails, a brickyard and, in 1779, a furnace for producing iron ore. In 1801, Jeremiah Colegrove, a settler from Rhode Island, introduced into his grist mill machinery for carding wool. That same year David Estes, another Rhode Islander, built a mill for carding and dressing cloth. Although not yet equipped with power-driven looms, these mills represented the beginning of the textile industry in North Adams.

The North Adams settlers from Rhode Island, most of whom were Quakers, drew upon the experiences in their home state in the development of power looms. The first textile factories in this country driven by water power were established in Rhode Island in the 1790s.

North Adams' early development was hindered because, although the north village had access to western markets via the Hoosac Valley and the Hudson River, the town was effectively cut off from the eastern portion of the state by the Hoosac mountain range. More significantly, the lack of capital available during the first quarter of the 19th century thwarted the expansion of local industries.

North Adams is situated in the midst of mountainous terrain. Bounding the city on the east is the Hoosac Mountain range. To the southwest is Mount Greylock; 3,491 feet above sea level, it is the highest mountain in Massachusetts. Smaller hills north of the city mark the border with Vermont. The city is located in a valley created by the confluence of the north and south branches of the Hoosac River. The center of the city, with its mills, commercial buildings, and early residential neighborhoods, occupies the valley floor while the surrounding hills are terraced with late 19th-century housing. Above the houses the higher elevations are covered with a dense growth of trees.

The streets of the city center follow conscious but informal settlement patterns, established in the early 19th century, in which buildings were constructed near the river to take advantage of the waterway's power. River Street, Eagle Street, Summer Street, Ashland Street and State Street (Route 2) retain some of the oldest buildings in the community. During the last half of the 19th century, when North Adams experienced a period of accelerated growth, residential neighborhoods were extended up the slopes of the surrounding hills. Streets such as Holbrook, Cherry and Wall (all part of the Church Street-Cady Hill Historic District) were laid out ca. 1880 to accommodate new houses for a growing middle class. Similarly, housing for the mill workers sprang up on new roads throughout the city. The Freeman's Grove Historic District is typical of such a predominantly working-class development on the north side of the river. In some instances housing developments followed old roads, such as Eagle Street and River Street. More often, new roads were laid out in orthogonal plans in defiance of the steep terrain. Housing developments in the south end of the city, where the valley broadens, grew up around the newly established Normal School on South Church Street. Church Street, from Main Street South to the Normal School (now North Adams State College, nominated as the Normal School Historic District), is where the city's wealthiest citizens tended to concentrate.

While most of the city's growth occurred in the areas surrounding the central business district and Monument Square (Monument Square Historic District), separate small mill communities also developed within the corporate limits of North Adams. Each tiny community consisted of a mill surrounded by employee housing, and often also had its own church and company store. Blackinton, Greylock, Braytonville, and the Beaver are the principal areas that still retain, to varying degrees, the appearance of autonomous industrial hamlets. The Blackinton Historic District was nominated to the National Register as the most intact mill community in North Adams.

The areas between these communities and the city center today, consist of a scattering of residential and commercial development with some vacant land. Virtually all of the original farmland in North Adams has been subdivided for development since 1945. Only the original farmhouses, in some instances, remain.