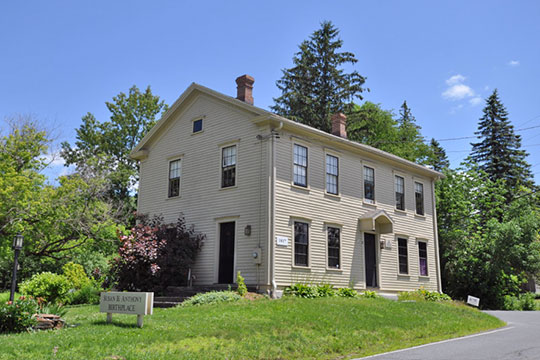 The Town of Adams was settled in 1762 and incorporated in 1778. One hundred years after its incorporation the town of Adams, named in honor of Samuel Adams, Revolutionary propagandist, was divided into North Adams and Adams.

Industrial development here began in the first half of the 19th century when William Pollock, who is said to have secured capital by selling an old horse for a lottery ticket that won a prize, built and operated the old stone mill now known as Broadly Mill. Paper and textile print works have long been the leading industries. Both lime and marble are quarried in the vicinity.

The Friends Meeting House (open), at the corner of Friend and Maple Streets, erected in 1786 and continuously used for over 64 years, is a 2-1/2 story gable-end structure that is still in an excellent state of repair. The two outer doors and the movable partitions, raised during regular services, provided privacy during separate meetings. No provision was made for lighting. Women were allowed to sit on the left to receive more heat from the fireplace.

The Quakers, who were the first settlers here, maintained justice with a minimum of legal proceeding as exemplified by the case of two neighbors who quarreled over straying cattle. The difference was taken to the meeting for settlement. After a period of silent prayer and waiting, a member quietly remarked, 'Six railes and a rider make good neighbors.' The two parties to the dispute shook hands and departed amicably to put up better fences.