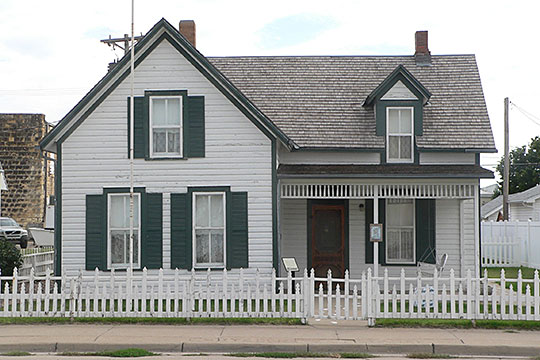 The City of Ellis, located in what was historically an open prairie and buffalo range, was officially incorporated as a "city of the third class" in January of 1888, but had existed as a normal community with a post office as early as 1870. The original settlement began as a water station in 1867 and was designated a division point on the westwardly progressing Kansas Pacific Railroad in 1870. In that year the railroad purchased the original town site through the Homestead Act and began importing the man power and equipment necessary to build and operate a steam engine maintenance facility and depot. These workmen and their families formed the nucleus of what would become the city of Ellis.

Because of location and the particular times with respect to the settlement of the American West, the city became famous as a rough and tough frontier railroad town, functioning for a time as a trailhead toward the end of the great cattle drive era, and as a destination for buffalo hunters, adventurers, tradesmen, merchants, homesteaders and others associated with this pioneering period. These times, although forever immortalized in popular folklore, were short lived as the area was soon to be subjected to intense settlement by succeeding waves of European immigrants seeking free land and a new beginning.

Peaking between 1880 and 1900, the unparalleled massive translocation of humanity which engulfed the area included people of many racial and ethnic backgrounds as well as places of national origin. Present were immigrants from Ireland, England, Austria, Germany, France, Russia, Sweden, several eastern European countries as well as freed slaves and other black settlers from the south. From this great melting pot of society would come several inventors, business men and leaders of industry which had an impact on a national scale, including such individuals as John Henry who invented the electric streetcar, Walter and Roy Cross who invented a widely used formula for the manufacture of gasoline, and Walter Chrysler, automobile manufacturer and founder of the Chrysler Corporation. Quick to establish the amenities of community life even before an incorporated city existed, the first post office was established in 1870 and the first church was organized in 1874. The first doctor arrived in 1884 and by the late 1880's, when the town was finally incorporated as a city, there were already about 1,000 residents.

With the final settlement of the region came law and order and the emergence of an economy based in agriculture, business and industry. By 1896 the town had elected an all-woman Mayor and City Council and a new emphasis was placed on education, cultural training and public improvements. The high school had been completed in 1892 and an opera house had opened by 1909. This was followed by a series of improvements including several major public projects such as a swimming pool, a bath house and a substantial dam on Big Creek which were completed by the Works Progress Administration during the 1930's.