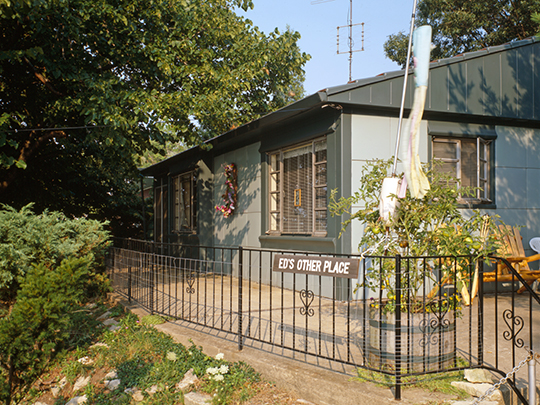 Description: (Based on exterior access only). The Powell Lustron is a blue-green, two-bedroom Westchester Deluxe (Model 02) with a darker blue-green painted trim. On February 16, 1971, the house and property were sold to the U.S. government for use in the Indiana Dunes National Lakeshore by the First National Bank of Michigan City which had become the trustee of the property on July 27, 1967 (Park Files). The bank retained a twenty-five year Reservation of Use (ROU) that expires February 9, 1996. Sometime between 1971 and 1974 the bank sold the ROU to Steven, Bernice, James and Reginald Sohacki who sold it to Edward and Amelia Rackas on September 7,1974. On March 21, 1991 the Rackas sold the ROU to Stephen and Nancy R. Powell who named the house "Ed's Place" in memory of their recently deceased son (Park Files). The Sohackis had originally purchased the house in 1966.

The house is a rectangular box on a concrete slab foundation with a gabled roof covered in dark blue-green enameled-steel shingles. Porcelain enamel modular steel panels over a structural steel frame serve for both interior and exterior finishes. One flight of straight-run stairs to the right of the north facade leads from the street to the site. A pathway runs around the gabled west end to the an entrance on the long south side. A recessed entrance under the gable on the east facade is preceded by a screened-in porch that is flush with the east and north walls of the house. The long north side has two large tri-partite windows with a central fixed light and three vertically stacked lights on either side. The west facade has one large tri-partite window. One small casement window on the south facade indicates the bathroom and a large tri-partite window marks the bedroom. The only visible addition is a screened-in porch in front of the entrance vestibule that may have been added at the time the house was erected (as was the case at the Jacob house). The house which is in excellent condition appears to be the same model as the Jacob Lustron at 104 State Park Road.

The plan of the house consists of an entrance under the east gabled end onto the living area. Off to the left but part of an open plan is a dining area leading to the kitchen, utility room and laundry area. Behind the living area are the sleeping quarters. A short hallway leads to the bathroom on the left and two bedrooms at the rear of the house to the left and right of the hallway.

In plan, the living/kitchen areas are identical to the three- bedroom model. The arrangement of sleeping space is also similar. In the three-bedroom model, the rear of the house is extended, the corridor is lengthened and an additional room is added across from the bathroom.

History: The Lustron company was founded in 1946 by Carl Strandlund, vice president and general manager of Chicago Vitreous Enamel Products Company. Having been refused a steel allocation by the federal government to produce gas stations for the Standard Oil Company, Strandlund developed a steel house that was sponsored by the government in their effort to alleviate the post-World War II housing crisis. The Lustron Corporation, the largest of 280 prefabrication companies existing at the end of 1946, (Wolfe and Garfield 51) produced about 2,500 all-steel homes between 1946 and 1950 when the company declared bankruptcy.

The original Lustron home was designed by architects Roy Burton Blass and Morris H. Beckman of Wilmette, Illinois (Mitchell 46). Aimed at a middle-class market, the house had many modern characteristics: stripped-down forms, 20th-century materials, and prefabricated building units. It continued to have traditional detailing, however, such as the gabled roof with enameled-steel 'shingles." The basic five-room house had a 32' x 36' open plan that used 20% of available space for built-in closets, dressers and closets (Wolfe and Garfield 58). Heat was supplied to the house through a radiant ceiling plenum system located under the gabled roof (Mitchell 48). The house was assembled on site by local craftsmen using an instruction manual provided with the unit.

Historical summary with special attention to the political and financial aspects of Lustron's creation, implementation, and later modification by Carl Koch. Illustrated with advertisements, pages from erection manuals, photographs during production and assembly, and photographs of completed homes.

Mitchell, Robert A. "What Ever Happened to Lustron Homes?" Bulletin of the Association for Preservation Technology, (Volume ?) 1991, 44-53.

Documentation of the Beverly Shores Century of Progress Homes and Historic District was undertaken in the summers of 1993 and 1994 by the Washington Office of the Historic American Buildings Survey (HABS) of the National Park Service, Robert J. Kapsch, HABS/HAER Division Chief, and Paul D. Dolinsky, Chief of HABS. The project was cosponsored by the Midwest Regional Office of the National Park Service, Andrew Ketterson, Chief of Cultural Resources and Craig Kenkel, Regional Historic Architect. Additional support was provided by Indiana Dunes National Lakeshore, Dale Enqquest, Superintendent and William Supernaugh, Assistant Superintendent.